2 Myths of Maui – Legends of The House of the Sun 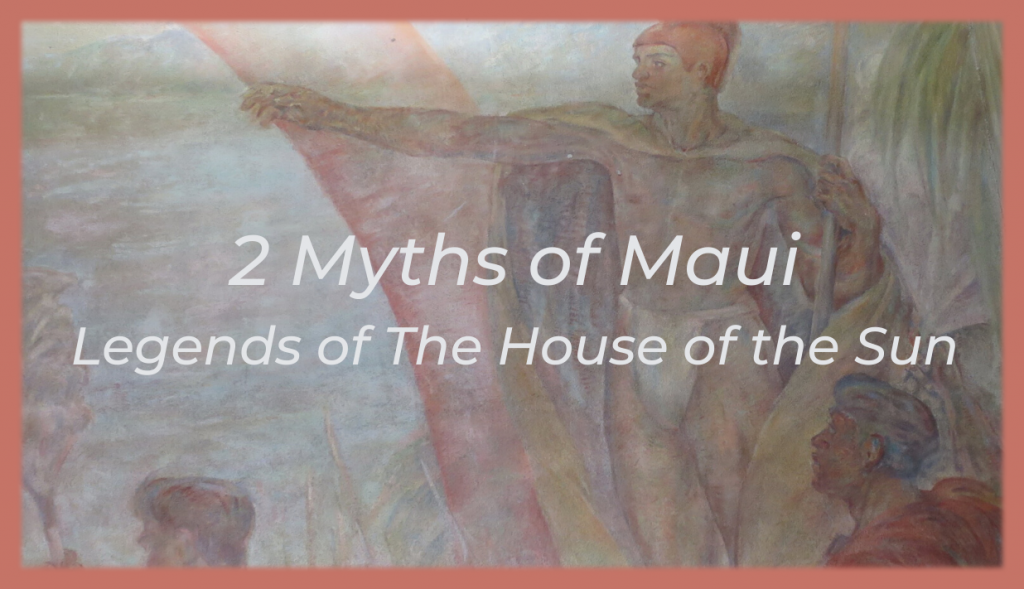 What is a legend?  It is a story rooted in a historical person, event, or place. Usually, a traditional tale, often regarded as factual, but unauthenticated. A legend is somewhere between history and myth. Like, the legend of King Arthur and Excalibur, the sword King Arthur withdrew from the stone.

Ancient Hawaiian legends, fables, and myths are essential pieces of a cultural past, passed from one generation to the next.

They are still passed down in the traditional format – through storytelling, chants, and talk story*. In this way, every child hears these essential tales of the Hawaiian Islands. This is how they know their cultural legacy. These legends can contain accounts of the past, like where the islands got their names, how the islands were formed, and other unique details.

Tahiti, Samoa, Fiji, New Zealand and other Pacific Islands, all have their own variation of these tales. Stories told for ages throughout all of Polynesia. 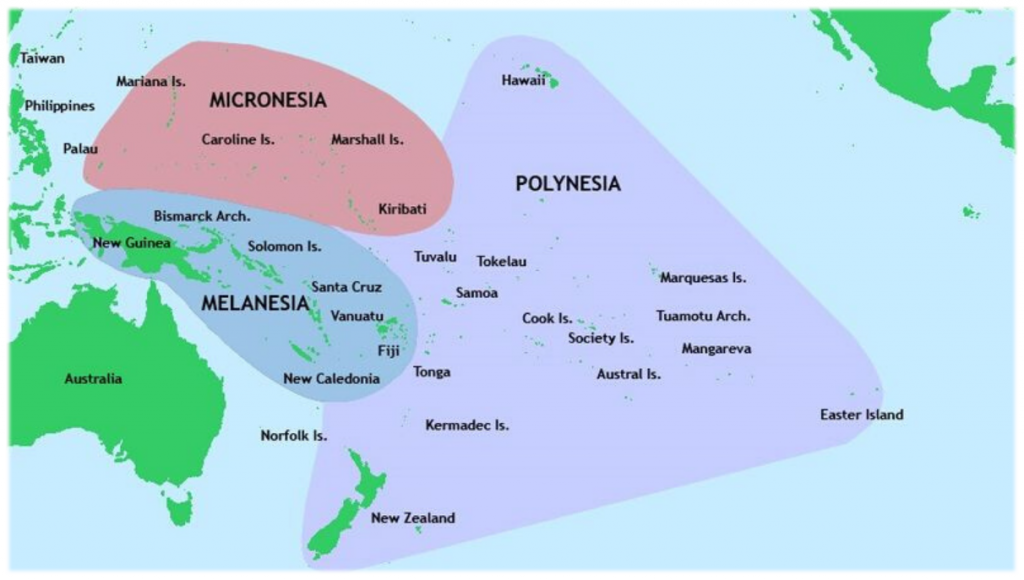 As we have mentioned in previous blogs, ancient Hawaiians had a deep connection to the earth and its elements. They used nature, legends, and myths to explain what has happened in the past and how things came to be.  And also, how to look forward to what the future may hold.

Let’s take a look at two legends of our island home, Maui, and her famous House of the Sun – Haleakalā. 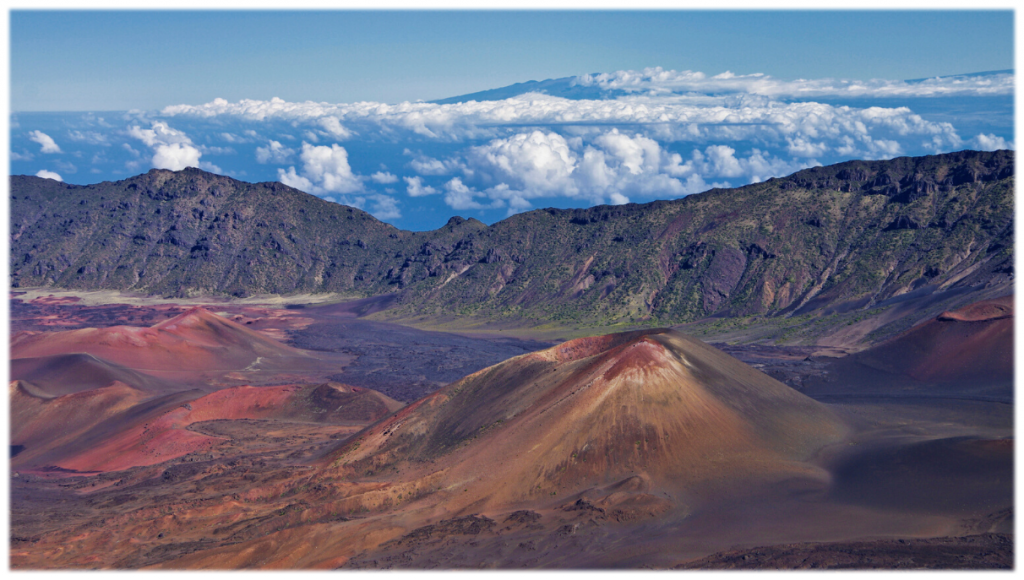 2 Legends of Maui – In The Forest of Haleakalā

When island children are young, the family will often camp at the beach, fish by day and tell stories around the fire by night. Here are two legends – of the Bird Catcher and the Canoe Builder. These are two of the typical legends you would hear if you grew up in the islands:

The young Ke’apomanu stands quietly in the ‘ohia forest of Haleakalā.   He is called ‘Apo.

He is listening and watching the colorful birds of Maui in the koa and ‘ohia.  ‘Apo knows he needs to watch closely.  He wants to know which birds frequent which ‘ohia* trees and at what time of the day.

Why such rapt attention, so far from home? He wants to grow up and be a kia manu or Hawaiian Bird Catcher. This is his first time out, on his own, to prove he is a true kia manu.

He repeats the key lessons in his head which, he has learned from his Kahuna*:

Making a note of which ‘ohia trees were popular with the birds, he fills his calabash with water from the spring and prepares himself to leave. He will return early in the morning to set his traps.

‘Apo looks around to admire the view. He can see 3 islands from his beloved mountain. Kaho’olawe, the Big Island, and Lana’i.  He begins to chant as he makes his way back to his camp.

The next day he sets his traps.

First, he takes off extra branches and some lehua* flowers from the primary branches. He leaves only a few blossoms perfectly placed. If there is a need for additional flowers, he will tie them on the cleared branch.  He then coats the branches with the sticky sap from the ‘ulu*. This technique is called kahekahe. 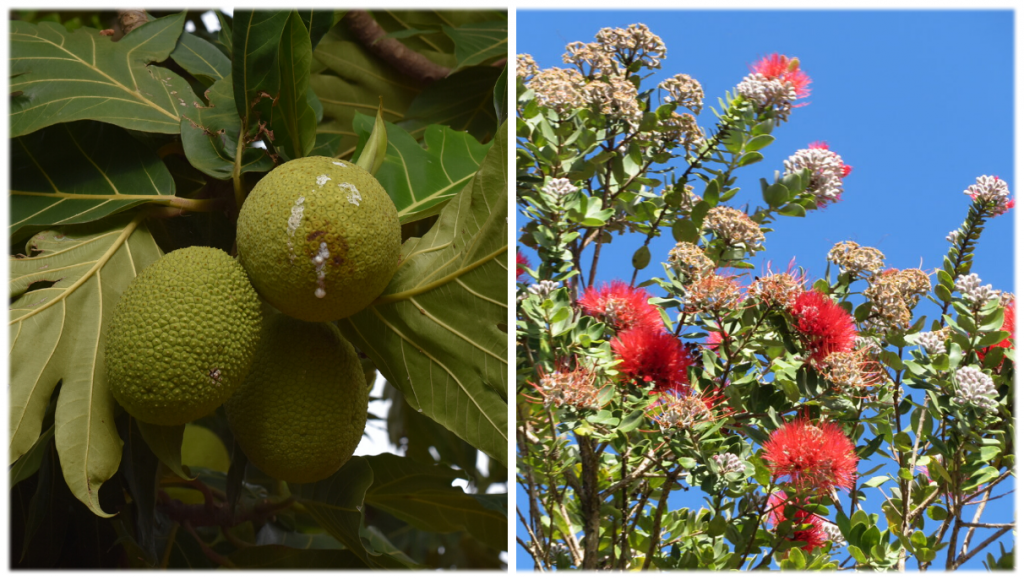 Once the birds are stuck, some of their colorful feathers are removed and a salve is applied.  Then, kukui oil is used to gently release them from the sap so they fly away.

As the days go by, ‘Apo’s  kapa* cloth bags begin to fill with vibrant feathers. Red feathers in one bag and yellow feathers in another. 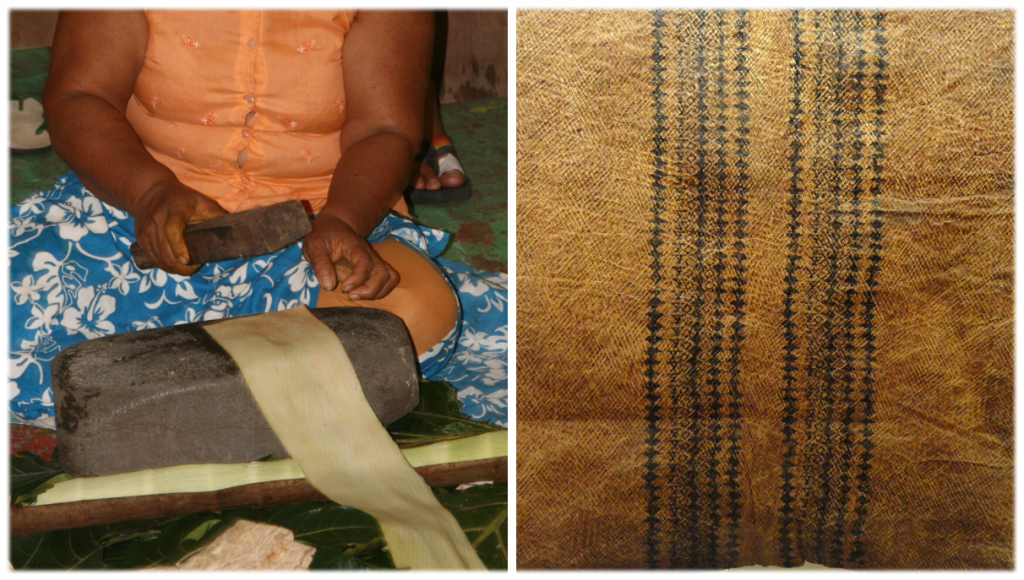 ‘Apo is delighted to be mastering the art of kahekahe and knows he will soon be a kia manu.

He heads home to show his Kahuna how well he has done in his first solo experience in the forest of Haleakalā. 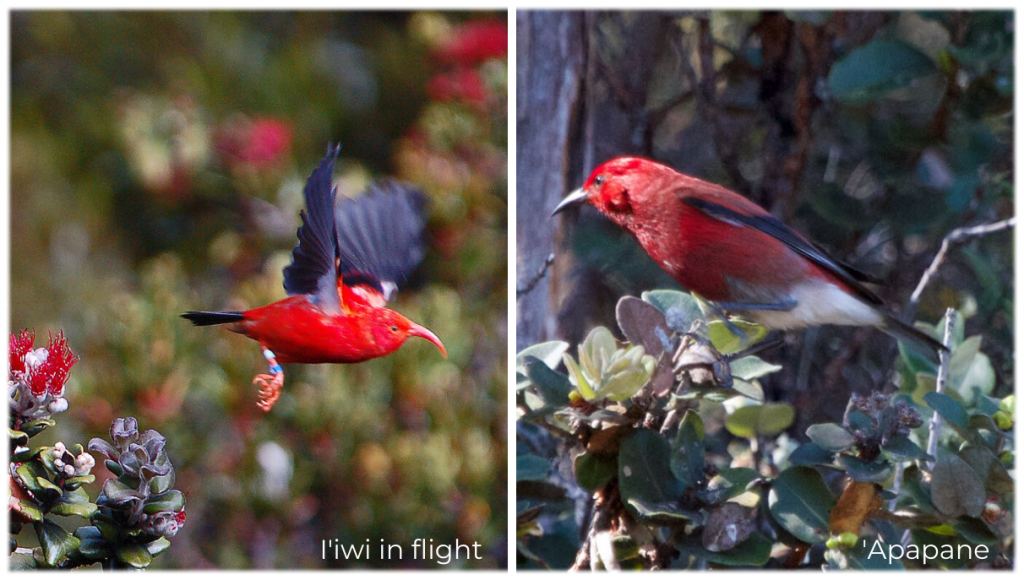 These birds were treated as a sacred resource. Their feathers were used to create beautiful capes, lei and head wear to adorn the clothing of the Ali’i*.

Kamehameha the Great, himself had forbidden bird-catchers from taking the life of the birds. The King wanted to allow his children in the future to experience the beauty of these wonderful birds. 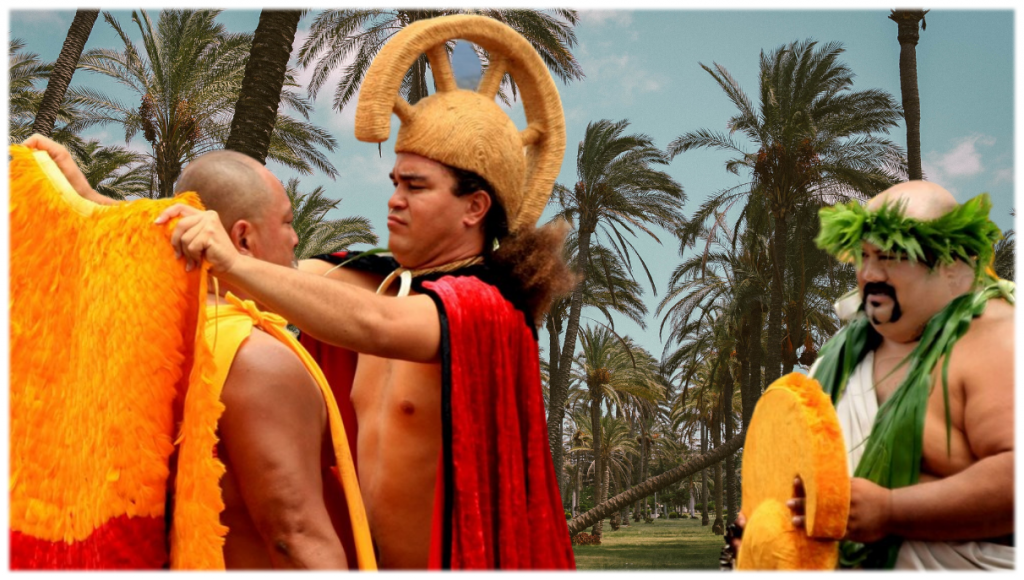 They looked like little rainbows – rain heated by the sun.

As a boy Kekoawa’a was fascinated with canoes. He is called Koa.

His attraction to the forest of Haleakalā was just like his brother’s. They both loved being among the ancient Koa, ‘Ohia and Sandalwood trees that reached to the sky and up into the clouds on the slopes of their beloved mountaintop, the House of the Sun, Haleakalā.

Koa’s brother, Ke’apomanu wanted to be a Kia Manu, or bird-catcher.

He wanted to build canoes. Kalai Wa’a or expert canoe builder was one of the most highly honored and essential parts of ancient Hawai’i. They were used for gathering food, transportation to visit other villages and during times of war.

Canoe’s carry the culture of the people and Koa knew in his heart he would make canoes that would last for generations to come. 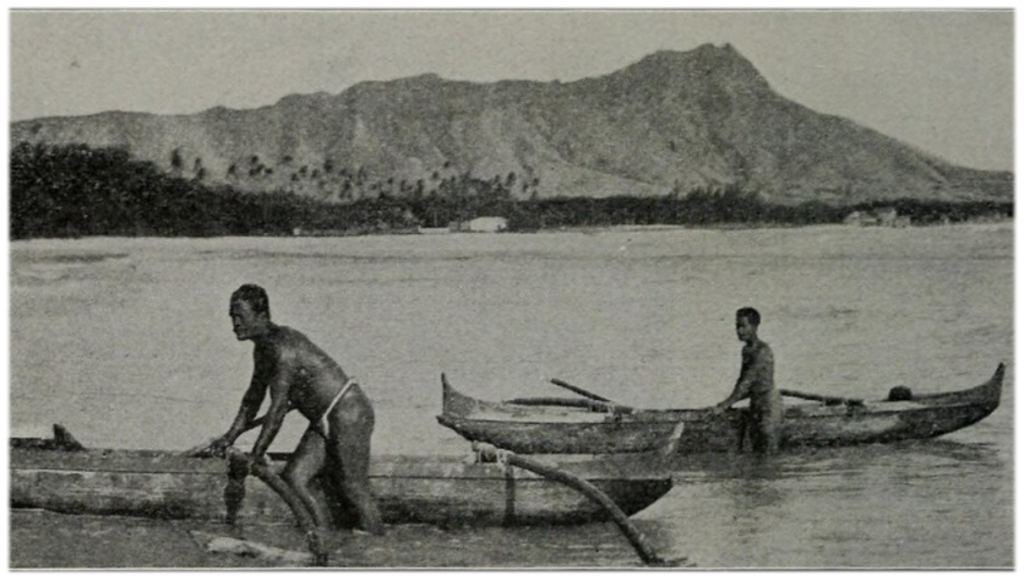 Koa’s path to his dream of canoe building began as a student of a Kalai Wa’a Kahuna.  An expert canoe builder.

What he learned from his Kahuna:

Soon the time arrives to leave. The signs are in balance. The journey up the mountain begins.

One last word from Kahuna, “take care in ministering to the rituals and protocols of cutting a koa tree. You don’t want a cracked canoe”.

Once in the forest, Koa walks silently.

Koa looks and listens for the perfect koa tree that will become his first canoe.

He remembers what Kahuna told him. If there is a lot of activity and noisy birds in a tree, it could be rotten or full of insects.

After finding the perfect tree, Koa constructs his first stone ko’i.  An adze made from basalt lava rock attached to an ‘ohia wood handle. Tomorrow the real work will begin, he thinks as he drifts off to sleep, smiling at his success.

In the morning after digging around the base of his tree down to the roots, he begins to chisel away. He then carefully notches the trunk in the direction he wants it to fall. This future canoe must land in a way that it can first be dug out, then slid down the mountain to the sea. 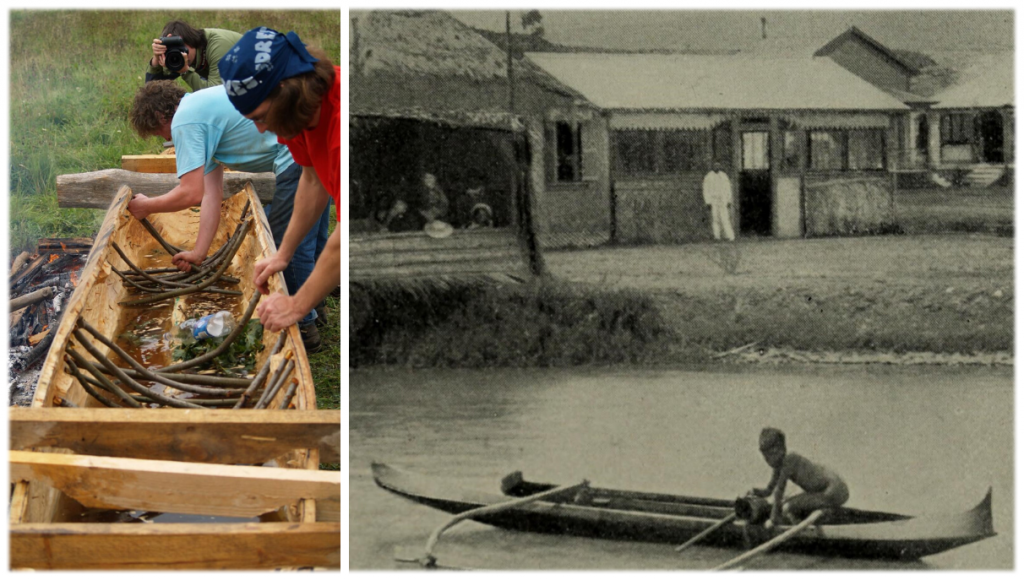 Like his Kahuna had told him.  If you follow the right path, you will reach your destination. Kekoawa’a’s dream had come true.

There are countless legends of Maui, in addition to all the other Hawaiian and Polynesian Islands.  We would be remiss if we did not mention the Demi-God Maui.  It is, after all, how our island got its name.

Maui, the original Hawaiian Superman captured the sun, discovered the secret of fire and raised the sky. He also had a magic fish hook that helped him pull the islands up and out of the sea. Maui definitely deserves a blog all to himself. Keep in touch.  We will visit the life of this very special and celebrated trickster, Maui, and all of his adventures soon.

Kahuna – translates as the secret.  Like a priest, minister or doctor

Malama i ka ‘aina – take care of the land

Talk Story – Hawaiian expression to chat informally or to shoot the breeze. A linguistic scholar describes it as a rambling personal experience mixed with folk materials.