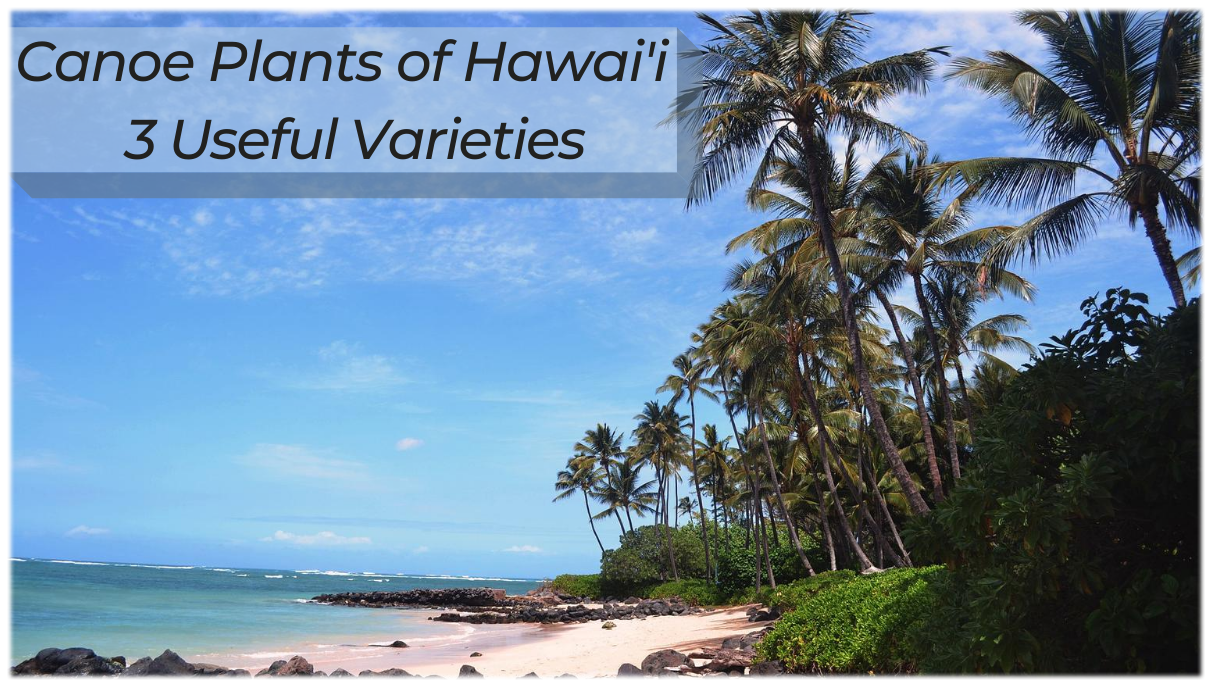 Before coming to Hawaii, ancient Polynesians had to be very observant to learn and understand the intrinsic value of the items they would carry with them on their long voyage.

Through trial and error, they learned which plants to bring. Plants that could provide what they needed to create and sustain their new life. How would these plants survive the long journey? Should they bring seeds, cuttings, or the whole plant? Years of planning and experimentation went into the preparation for the journey north to Hawai’i.

Upon arrival, things needed to be set up quickly. Plants and seeds required getting into the ground and shelters built for the people. Freshwater and food needed to be found. It was hard, ambitious work. There was no Plan B.

How many years did it take for them to be sure of the best ways to transport things, so everything ended up at its destination intact and useful? They wanted to recreate their life as they knew it with improvements. To do that, essential items had to be carried with them.

Some of Those Items Were What We Now Call Canoe Plants

In this blog series we are covering some of the foundational Canoe Plants; the plants which were considered essential during the first voyages.

Last week we began our sojourn in Canoe Plants and learned about 3 that are edible.  This week we will talk about three plants that have a multitude of uses.

Here are 3 of the essential practical plants.

Keep in mind, many Canoe Plants cross over into more than one category.  Although we chat today about useful plants, you will see how each plant has multiple uses and benefits.

The original Kanaka Maoli (Hawaiians) did not have or use pottery.

Instead of using pottery, they grew functional and beautiful hard-shelled, thick-walled gourds of many sizes, known as ipu. These gourds served the same functions as other cultures’ pottery.

Ipu seeds were carried in the canoes that came from Polynesia. Along with the seeds, ipu were brought along to store water, food, medical supplies, bait, and fishing supplies. They were also used to bail water from the canoes.

These traditional ipu gourds were dried naturally, leaving them a golden and often mottled brown color. 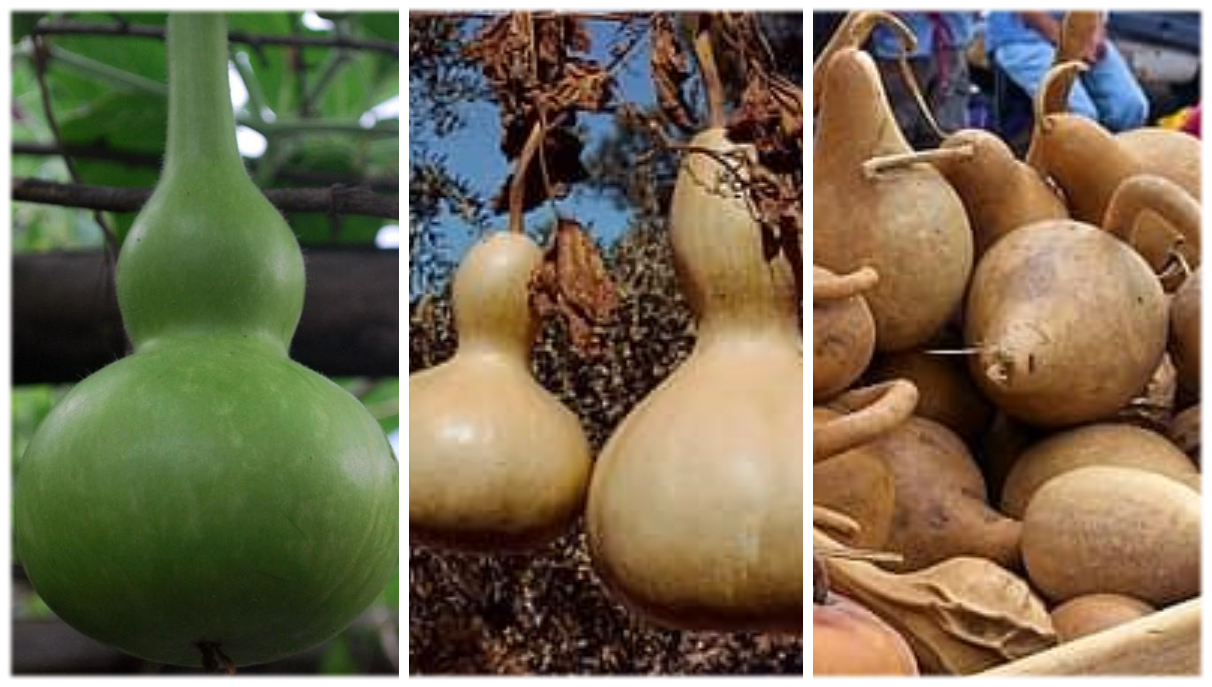 When large gourds, filled with water or supplies, needed to be transported, cordage was created by hand by twisting and braiding the fibers from native plants like olona*, niu* or wauke* .  This made the gourds easier to carry. 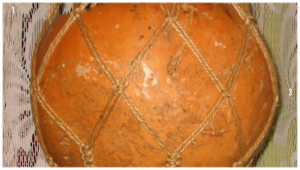 Besides being practical, the ipu was used in hula* as a percussion instrument.  Smaller sized gourds were used for ‘uli’uli* and larger ones were used for ipu heke*. 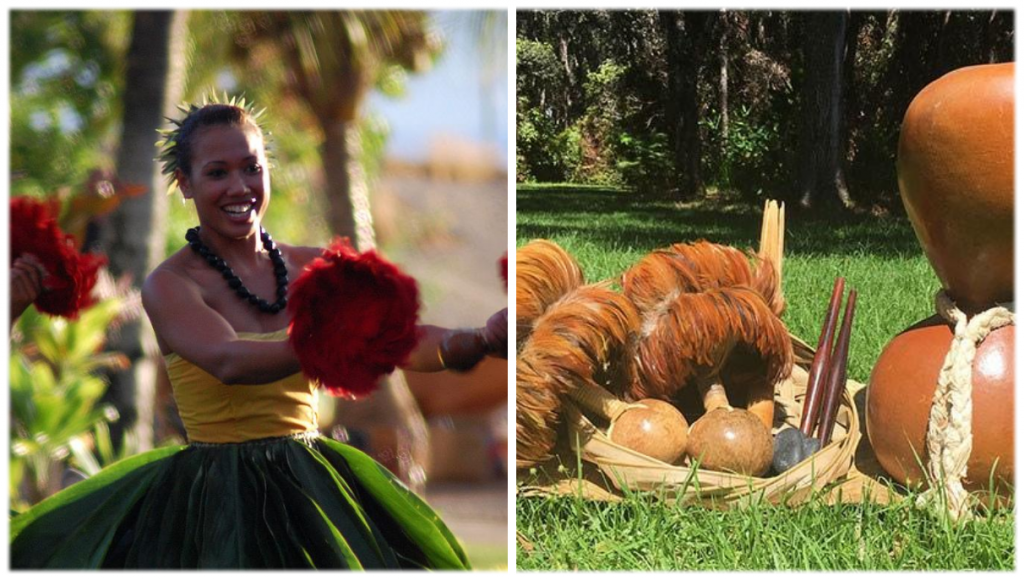 The coconut palm provides one of our most basic needs – water.

It is said that the most sterile water on earth is the water in the coconut.  High in potassium and low in sugar, you can’t go wrong. Stories that have passed down through the ages tell us that coconut water helped many island and coastal people survive a drought.

Although Hawai’i is on the edge of the coconut belt, there are still plenty of coconuts for everyone on the islands. You can find beautiful coconut palm groves on every island. 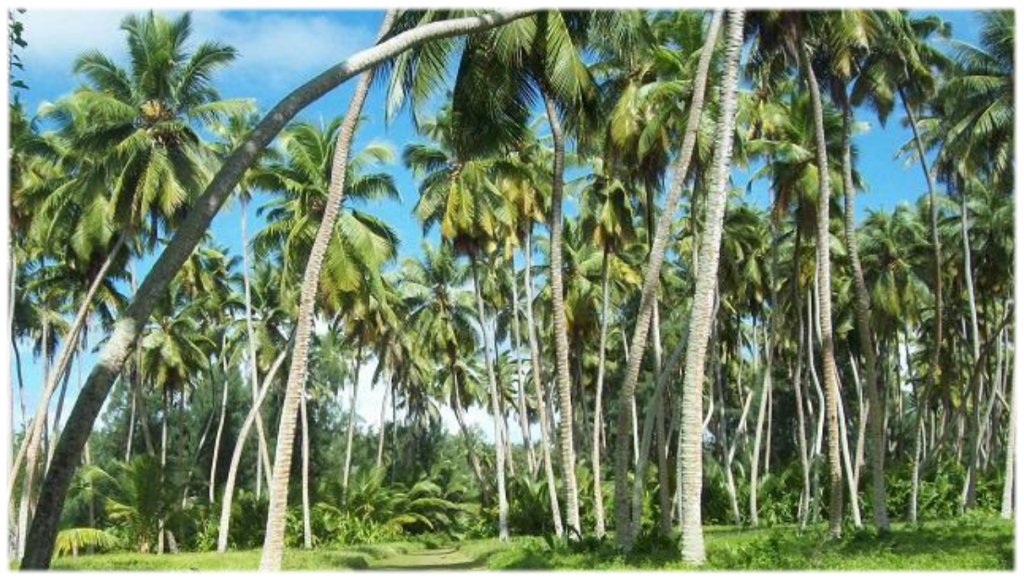 The majestic Niu has more uses than most any tree on Earth.

Fresh coconut water is an alkaline-forming food.  Therefore, , it aids the digestive system which in turn, and as a result, it helps the body stay in good health. 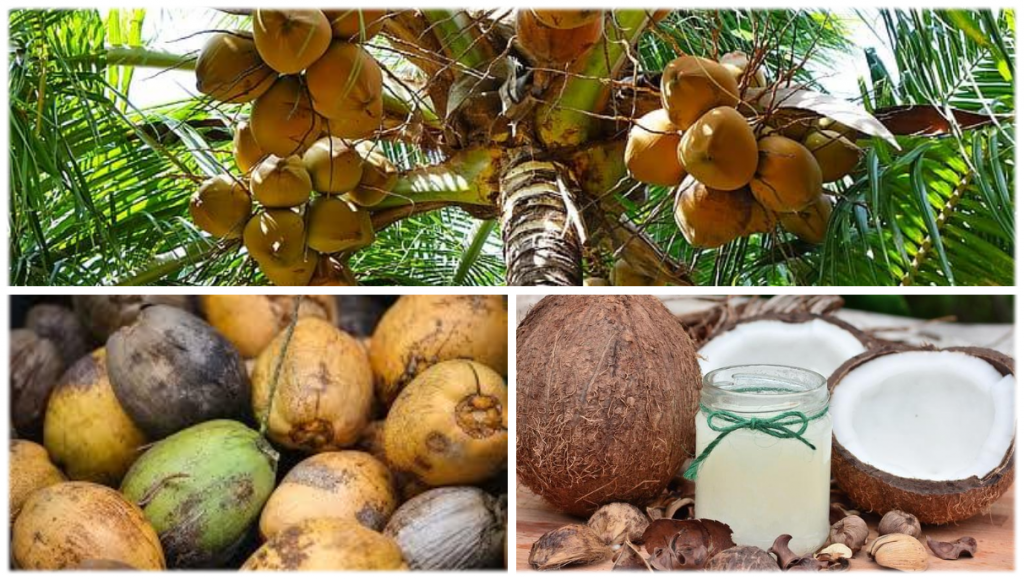 One lovely tradition from the island people is that a niu tree is to be planted at the birth of a native child.  It will fruit on the child’s 7th birthday and it will provide food for 70-100 years.  Food for a lifetime.

The Ki Plant- Famous for Okolehao

There are at least 79 varieties of Ki 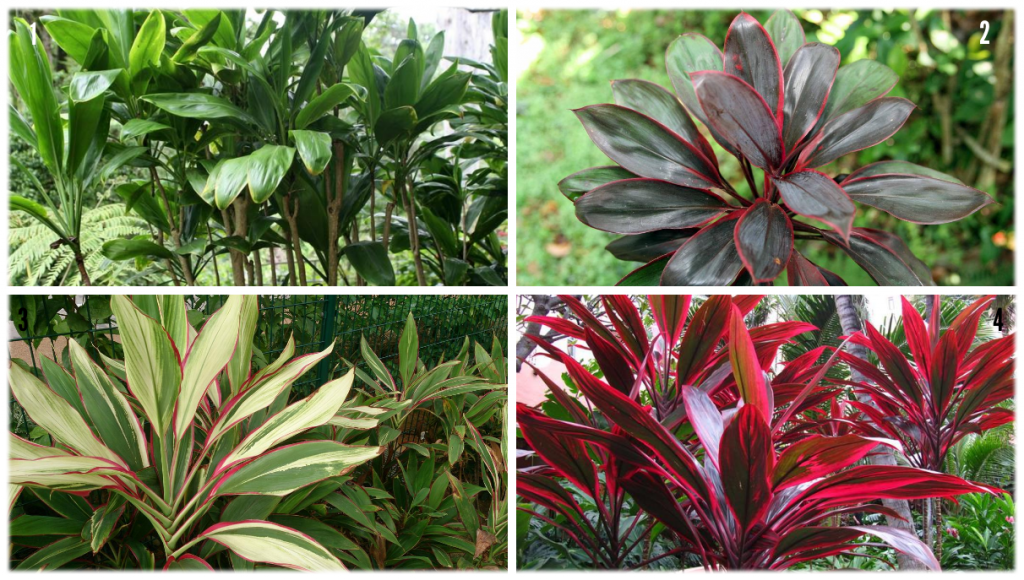 In ancient times, the ki leaves were sacred to the Hawaiian demigod Lono, and Laka, the goddess of hula. Kahuna* used them in their ancient ceremonial rituals. They were used to ward off evil spirits and call upon the good spirits.

Since Hawaiians believed that the ki leaf plant had great spiritual power, only the Kahuna and the Ali‘i* wore the leaves around their necks during certain ceremonies and protocols.

Much has changed since days of old.

Today, people plant ki around their home to follow the old ways. Plant a ki plant at each corner of your property to protect your home and family. These plants will summon the good spirits and repel evil spirits. They bring good luck to you, your land and your home.

Many people are known to pick the mu’o* of the ki plant and carry it for good luck and well being.

Ki leaves have a tight cuticle or outer layer, which gives them the ability to shed water quickly. Therefore, it is a plant with many practical uses.

Here are some of them: 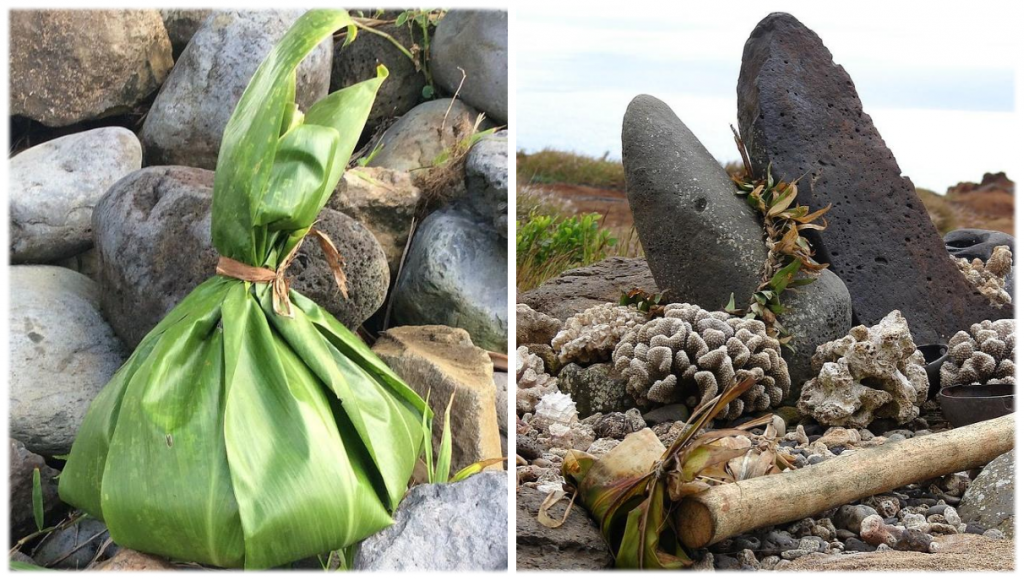 Speaking of wrapping up…

Before we do, take a peek at this video of hula dancers wearing ki leaf adornments as they play their ipu heke: HERE

Oh my, we mustn’t forget the infamous Okolehao* ! It was the first moonshine distilled from the root of the ki plant back in 1780 by an English sea captain.  It was first brewed to help the sailors with scurvy.

Originally it was a type of crude beer and took 10 years to refine as a liquor.  At that time, it was well-received by sailors and Hawaiians alike, including King Kamehameha I. Sailors on leave from the whaling boats in Lahaina drank so much, they had to build the now-famous jail there!

Kamehameha I recognized the overindulgence and banned the strong drink in 1818. This prohibition was lifted in 1833 by Kamehameha III.

As you can imagine, there are enough stories about Okolehao to have its own blog.  Perhaps we shall tell this story soon.

But in the meantime, we want you to know that Hawaii’s only indigenous distilled spirit is still made here today. It is a highly alcoholic spirit, so we encourage you to exercise caution if you decide to try it. 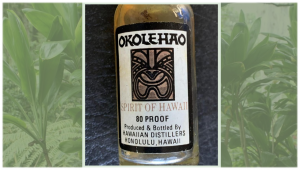 We can see just how vital Canoe Plants are by looking around our islands today.

Any traditional hula performance will implement a variety of ipu, ki leaves, and coconut.

You can find ki leaves growing everywhere! These plants were essential then as they are now. They are part of the fabric of Hawai’i.  They are visible in ceremony, hula, luau, and many other events.

Since the niu grows better at lower elevations, you will recognize the large Hawaiian settlements from days gone by when you see a beautiful coconut grove. An ancient form of sustainability, these trees provided so much to nurture this island nation

… journeying north to Hawai’i to find these islands. They knew they could settle them as they had foreseen and prosper, in large part due to the plants they brought with them.

Like a Noah’s Ark of the Polynesian culture they were able to transport two of everything they needed to a new island chain, the beautiful and unique Hawaiian Islands!

As you can see, we are only touching the surface of Canoe Plants …..

Next week, join us when we explore the stories of the ceremonial and medicinal plants carried thousands of miles to these shores.

Ali’i – part of a hereditary line of rulers

Imu – oven in the ground

Kahuna – a wise person or shaman

Okolehao – indigeneous distilled spirit from Hawai’i; literally – knock (me) on (my) rear end!