How Maui got its Name

In the Hawaiian language, Haleakala means “House of the Sun” and it was here that Mowee, a super-hero of Polynesian mythology and namesake of Maui Island, leapt from hiding and lassoed the sun with a strong rope. He subdued the sun from racing too quickly across the sky each day and not providing the people enough light. The demi-god, Maui, demanded the sun to crawl slowly across the sky and provide the people more daylight to grow food, fish, and dry their banana’s and kapa cloth and other activities. With its role in Hawaiian mythology, it seems only fitting that the sun would be the initial target of the first observatory built on Haleakala. It all began in the Spring of 1951 when Grote Reber, a pioneer in the exploration of radio waves from space, came to Hawai’i. Based largely on his report of the viability of Haleakala as an observatory site, the University of Hawai’i built and dedicated on January 24, 1964, an observatory at the site that would help scientists lasso the secrets of the star that powers our solar system, our sun. The Mees Solar Observatory is named for Dr. C. E. Kenneth Mees, a pioneer in the development of photographic emulsions for astronomy. Mees was a vice-president of Eastman Kodak, a financial benefactor and early supporter of the University of Hawaii’s acquisition of the Haleakala High Altitude Observatory (HHAO). Since the first dome and telescope were built atop Haleakala in the early 1960s, dozens of new instruments have been added to the Science City site, each with greater sophistication, and new purpose to pursue in man’s quest to understand all that can be revealed in the heavens. Just as the earliest Hawaiians looked to the sky for guidance in navigating, planting, worshiping and most of their daily activities, we now look to the skies to give us greater understanding of the cosmos that surrounds us. Maui’s Haleakala and Science City will remain at the forefront of this quest for years to come. 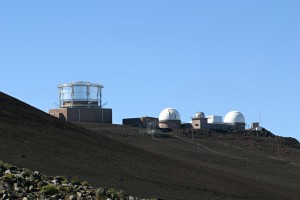