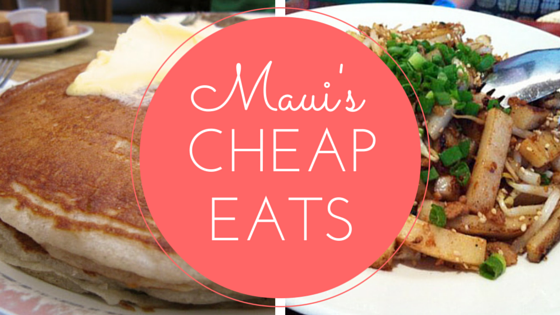 Maybe it’s the last few days of vacation, and a quick peek at your bank or credit card app brings you to the shocking realization of exactly how much you spent on Maui—especially on food! I know, it’s easy to get swept up in the amazing restaurant scene here on the island, especially in the resort areas. Before you buy yourself a jar of peanut butter to subsist on until you get home, check out these places that are both delicious and easy on the wallet!

Tasty Crust – Wailuku
When I moved to Maui, I was twelve, and too cool for everything. I heard about this restaurant, and immediately declared that I would never eat in an establishment called “Tasty Crust.” Years later, my then-boyfriend-now-husband heard that I’d never been there, and marched me in for breakfast one Sunday morning. Let me tell you, I did not know what I was missing. If you want a pancake, and I mean, a HUGE, dinner-plate-sized, fluffy pancake, check out this unassuming Wailuku eatery for one of the best breakfasts on the island. Add on a side of eggs or meat for just a bit more, and you’ve got a meal that will keep you going all morning, all for around six or seven bucks. Don’t forget, though: bring cash!

Café O’Lei at the Dunes – Wailuku
Not far from the airport, this is one of the best places on the island to get a cheap yet elegant lunch. Generously portioned sandwiches served alongside tasty Caesar salad will set you back around seven or eight dollars, but their daily plate lunch special (usually $6.95) is really the best deal to be had, and the selection always changes. For local flavors at amazing prices in an upscale setting, this is the place to be! Also, if you’ve got little ones, their keiki menu prices are almost un-beatable.

Star Noodle – Lahaina
With as red-hot and trendy as Star Noodle is (seriously, expect to wait at least an hour if you’re dining in), you might not expect it to be reasonably priced. But it is—most of their noodle dishes and share plates are right around twelve bucks. For a party of four, three to four plates is more than enough, because they’re certainly generous with their portions for most dishes. I like the Lahaina Fried Soup (an addictive take on chow fun), the Filipino Bacon & Eggs, and the Pad Thai. The priciest thing on the menu is the drinks, so if you stick with water or soda, you can even do dessert and still leave for around $25 per person. Speaking of dessert, always ask what their gelato flavors are for the day; they do some of the most unique flavors I’ve ever seen, like sweet corn, lavender shortbread, and black-pepper caramel. For seven dollars, you get three flavors that will most likely blow your mind.

Bonus: Tommy Bahama – Wailea
I know, I know: Tommy Bahama is definitely not what you’d call “cheap eats”—except at happy hour! Their “Island Time” Happy Hour is one of the best deals I’ve come across. They offer great discounts on their amazing cocktails (and their bar staff is incredible, by the way!), but the almost-unbelievable deal is on the food. Once, I added it up: if you ordered one of everything on their Island Time food menu, you’d spend forty-two dollars! So, for a drink or two, and some amazing pupus (including my favorite fish tacos ever), you can easily spend less than thirty dollars for a decadent afternoon! Sweet!