Maui’s extinct volcanos are still on the move!

Lava rocks littering the Honoapi’ilani Highway across Maui’s westside pali (sea cliffs) are proof that two-million year old lava flows on Maui’s extinct volcano are still on the move! They are sliding toward the sea today just as they did in past millennia, but today they are being slowly pulled down the volcanic slopes by gravity rather than being pushed down the by torrents of molten lava oozing from caldera or vents on the slopes high above. Evidence of this continuing movement along the journey to Maui’s popular Westside region is best seen along highway #30 from Ma’alaea, Lahaina, Ka’anapali and the popular “westside” where the slashed faces of the towering sea cliffs stand high above the road and sea. Just beyond Ma’alaea Bay at McGregor Point the Honoapi’ilani Highway, dubbed the Sunset-Skyline Highway after it replaced the old but still-visible roadway in 1951, the modern roadway begins to wind its way upward along the Kealalouloa Ridge cliffs. It steadily presses higher and higher to cross the steep seaward cliffs of the ridge, ducking through one stone-sided gash in the mountainside after another. Today, many lava faces beside the roadway are covered with a steel wire mesh designed to hold back the moving lava that now falls in pieces from the leading edge of the once dynamic flows. Freed by time, rain, and wind, these fragments are pulled toward the sea from the lava faces that hang precariously above the roadway. The highway across and through the Pali clearly reminds us of the remarkable power of volcanism, erosion, and the continual pull of gravity that provide the energy to return Hawaiian volcanoes to their birthplace in the sea; first as increasingly shrinking mountains, then near-surface atolls, then coral reefs, and finally, when fully drowned, to subsea mountains and plateaus known as seamounts. All Hawaii’s volcanoes, including Maui’s Kahalewai and Haleakala, despite how high and mighty they are now, will follow this overall pattern of eruptive growth and final decline. It is the fate that awaits them all. 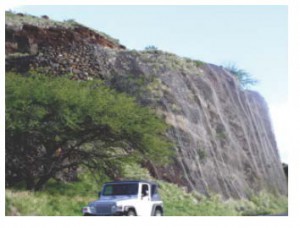 Maui’s only tunnel and netting holding back the lava rock on Honoapi’ilani Highway, Route 30. 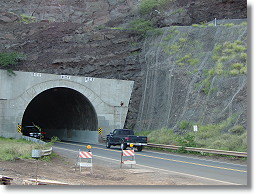