Maui’s Haleakala – Where Nature and Technology exist in Harmony

Maui’s Haleakala volcano is host to some of the most advanced astrophysical research in the world. Cutting edge projects have included a significant role in the immensely successful Hubble Space Telescope (HST) as it orbits the earth taking magnificent photos and measurements of the Universe far beyond the capabilities of ground-based telescopes.

The Hubble was launched in 1990, and remains in orbit and service to science today. Named after Edwin P. Hubble, the scientist whose tireless efforts atop California’s Mount Wilson popularized the concept of an expanding universe stretching billions of light-years in every direction, the HST rode into orbit aboard the Space Shuttle Discovery. Since then the orbiting telescope has revolutionized much of what astronomers know about the Universe; it has become a household name in the process.

Hubble’s photographic Hall of Fame includes the deepest view ever of the universe in visible light; a peek into the environs of super massive galactic black holes; the majestic birth of stars in monstrous stellar clouds; planetary systems forming around other stars; extraordinary arcs, shells, and ribbons of glowing gas sculpted by the deaths of ordinary stars; mega-megaton blasts produced by the impact of a comet into the cloud tops of Jupiter; the surface of mysterious Pluto; and galaxies at the edge of space and time.

Hubble was conceived to tackle scientific goals that could be accomplished only by an observatory in space. With updates being done by space shuttle crews its mission is to spend many more years probing the farthest and faintest reaches of the cosmos.

At 10,023 feet above sea level, the summit of Haleakala rises above one third of the earth’s atmosphere. Additionally, because of its isolation in the middle of the Pacific Ocean – far from encroaching city lights and electronic interference – its “seeing” conditions can be as good as on the Big Island’s Mauna Kea that, according to astronomers, has the world’s best astronomical viewing conditions for ground-based observatories.

Haleakala’s position near the Equator, about 21 degrees north latitude, also gives Science City’s eyes and ears venues of the sky above the Earth not enjoyed by observatories farther from the waist of the globe. 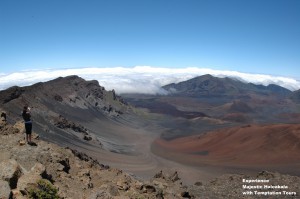