Maui’s Kula: A State of Mind

In the minds of many Maui residents, Kula is the island’s unexpected jewel. They happily leave the island’s fringe of sun-drenched sand to visitors and newcomers and make their homes and raise their families in the slow-paced rural communities that dot the north slope of Haleakala.

Kula is the heart of Maui’s “Upcountry,” a rambling region of the island where once farmers, cowboys, planters, and other country folks were the primary residents. The ill-defined boundary of Kula is largely drawn only in the minds of the residents, with no one having a distinct line to point to. 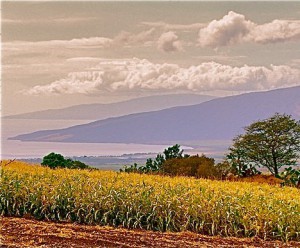 When the Territorial Legislature first set up the political design for the state in 1906, they decreed only two levels of government: state and county. None of Hawai’i’s cities or villages actually have boundaries or “city limits.” That’s why Kula is more a state of mind than a place: More a lifestyle than a single location on Maui’s map; a nebulous place anywhere along a fifteen-mile swath of land encompassing a region between about a thousand feet and four thousand feet of elevation along the western flank of Haleakala, our long-dormant volcano that dominates the island’s landscape and the Kula district.

Communities along the old Lower Kula Road with names like Pulehu, Waiakoa, Oma’opio, and Keokea attest to Kula’s Hawaiian heritage, but each also has its own history of ethnic settlements by Maui’s first waves of newcomers: immigrant plantation workers.

In the late 1800s, Portuguese and Chinese immigrants, who had fulfilled their labor contracts with the sugar cane plantations, moved to this area, drawn by the rural agricultural lifestyle. Later large numbers of Japanese farmers moved into the fertile area. These farmers have been producing fruits and vegetables ever since. 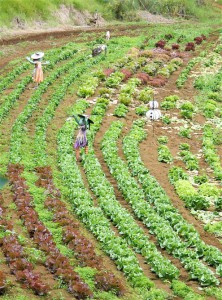 Maui’s famous Kula greens are grown on the cooler hillsides of Haleakala and protected by typically Maui scarecrows. Much of the produce is sold to local restaurants and at farmers’ markets.

That farming tradition and lifestyle continue today, among the fancy gentlemen’s farms that have sprung up in the past 2 decades. Kula continues to grow its well-known sweet onions and corn, lettuce, tomatoes, carrots, cauliflower and cabbage. It is also a major source of cut flowers: Most of Hawaii’s proteas, as well as nearly all the carnations used in leis, come from Kula.

Kula is generally thought of as the region encompassing the areas mauka (above) and makai (below) Lower Kula Road, the remnants of the old county road that once spanned the region before the present Kula Highway was finished in 1964. The old meandering road crisscrosses the straight-as-an-arrow modern highway in numerous places along its length from Pukalani to Keokea and gives frequent access to varied segments of the elongated community.

All Temptation Tours’ excursions that include the journey to Haleakala Volcano – Summit Lavender Sojourn, Haleakala Sunrise, Crater and Rainforest – travel through the dramatic Kula region of Maui, indeed the jewel of rural “Upcountry” Maui.