Our humpback whales are returning. They have begun arriving in Hawaiian waters a bit earlier than usual this year. The first were spotted in mid-October near Maui. Soon scores will be arriving almost daily as the Central Pacific herd gathers in Hawaii’s warm and peaceful waters for their winter renewal and to entertain locals and tourists alike. The first arrivals are the younger, faster swimmers who seem eager to get here in anticipation of the warm water, sunny skies, and, of course, the opportunity to meet and court members of the opposite sex. The later arrivals are the older, slower animals, and last year’s mothers traveling with their calves. The last to arrive, probably in December are the pregnant females coming to calf in the Islands’ warm waters. 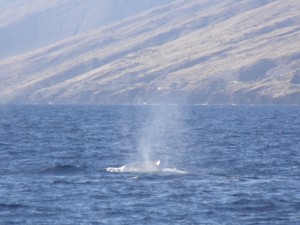 The newly arrived whales seem to announce their
arrival with infrequent puffs of breath and spend the first days of their Maui visit just resting.

While at “home” in our warm and protected waters they will birth the next generation of these magnificent creatures, teach their young how to play, navigate, and bond with others, practice their singing and courting rituals, and the fortunate ones will breed to produce next winter’s offspring. In November and December, except for a few infrequent breaches, tourists and locals alike have to be satisfied with seeing occasional spouts or large, shimmering black backs rising briefly among the waves.

Pods of two and three whales seem to patrol the shoreline, checking out their familiar haunts, exploring new places, and, probably looking for familiar “faces” or appealing potential mates among their fellow tourists from above the Arctic Circle. Then, in the peak season – January and February – and with their strength restored after the long 3,500 mile swim (their version of jet lag?), a new exuberance begins showing itself. The infrequent leaps turn into multiple, full body flights above the waves and they are beginning their impressive pectoral fluke slaps – loud and very showy attempts to perhaps draw attention to themselves? – and certainly human crowd pleasers. 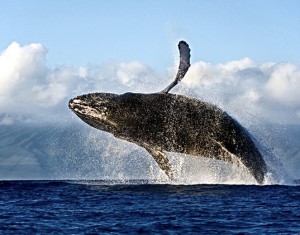 After a while the whales begin to show their exuberance with breaches and other acrobatics.

They also are gathering and reforming into larger, new pods to play, tour, and enjoy the warm water and weather. Then, usually by mid-April, as quickly as they arrived, they are gone. Returning to their summer feeding areas. And they are missed by all who feel the energy they bring to Hawaii’s waters.
Many of Temptation Tours excursions take routes along Maui’s western shore and provide opportunities to view the whales.