High atop Maui’s Haleakala, the dormant volcano that dominates the island’s landscape, “Science City” sits on a pinnacle of lava, cinders and ash formed from countless ancient volcanic eruptions. Its domes glisten in the brilliant afternoon sun above the mountain’s almost-daily flaring skirt of clouds clinging closely to its slopes like a ballerina’s tutu.  From the mountain’s lofty perch Maui’s fertile Central Valley below and the West Maui Mountains, also called Kahalewai, in the distance appear as a breathtaking three-dimensional patchwork of sugar cane fields and desert while the surrounding blue Pacific, relentlessly whipped by the nearly constant trade winds, reaches in every direction to the distant horizons. But, it is what’s above Haleakala that matters most to Science City, it’s unofficial but popular name, and to the scientists, technicians, and military personnel who use the site for observing, exploring, probing, and monitoring our planet’s sun, solar system, galaxy, and, indeed, the entire universe. Officially, Science City is known as the Haleakala High Altitude Observatory. With an impressive collection of optical, radio, radar, and infrared telescopes, listening dishes, and sensing instruments, the varied observatories scan the limitless sky above on a 24/7 basis. Simultaneously they perform such diverse missions as exploring the heavens, monitoring natural and manmade space activities, tracking the growing amount of space junk, and defending the nation from missile attacks. The array of observatories at the summit site includes both science and military projects, managed by an alphabet soup of civilian, governmental and military agencies. They are supported by labs and computing facilities far below at the Advance Technology Center in Pukalani and Kihei’s Maui High Performance Computing Center (MHPCC). Temptation Tours excursions get you as close to “Science City” as mere mortals are allowed. 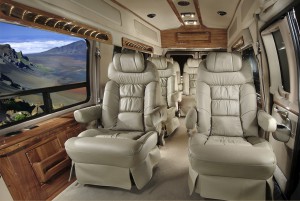 Limo-Van Luxury for Everyone!