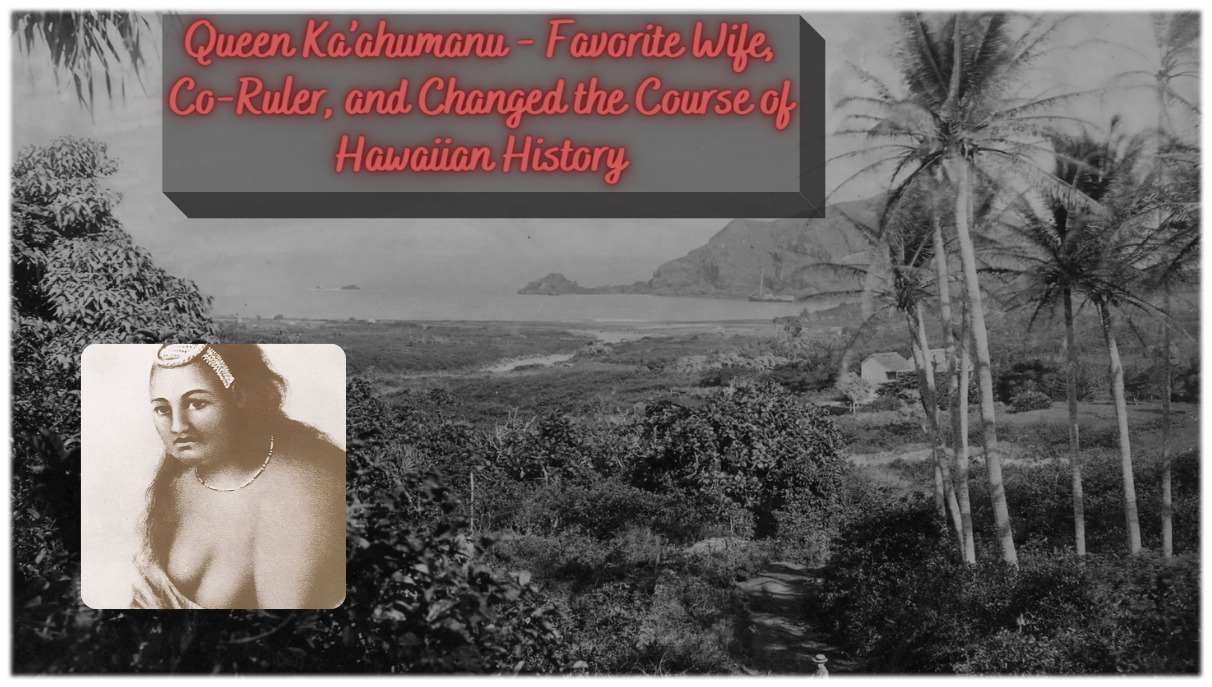 In 1768, one of the most influential and important women in modern Hawaiian history was born. This woman came to be known as Queen Ka’ahumanu. A free spirit and a forward thinker, she was born in a tiny cave set into the side of Pu’u Kauiki. This 380′ tall cinder cone hill forms the backdrop for Hāna Bay in Maui. 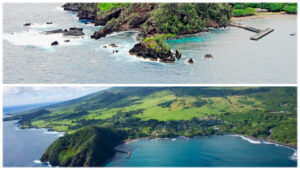 When you travel to Hāna, you can find a small plaque proclaiming the birthplace of the former Queen. In addition, the trail to the cave was partially covered by a landslide during an earthquake in 2007. 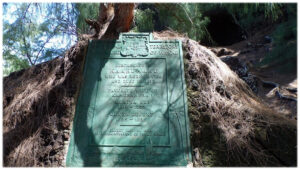 This baby was born in a cave in Hāna because her mother was related to many Kings of Maui. However, due to her high ranking class, her birth and birthplace were kept secret from her family’s many rival kings and chiefs.

Ten years after her birth, Hawai’i was thrust into the modern world. Captain James Cook and his fleet arrived. After centuries of isolation from the rest of the world, Hawai’i was to change forever.

Ka’ahumanu would be a significant part of this change.

During the two decades following Captain Cook’s discovery of Hawai’i, two formidable Hawaiian leaders instigated and oversaw massive social, religious, and political upheaval and change. One of those two was Ka’ahumanu, the subject of today’s blog. The other was Kamehameha the Great, who united the separate islands into the Hawaiian Kingdom. Ka’ahumanu, Kamehameha’s favorite wife, became the Kuhina Nui or acting Regent of Hawai’i once Kamehameha the Great died.

This woman, who changed the course of Hawaiian history, has become known simply as Queen Ka’ahumanu. 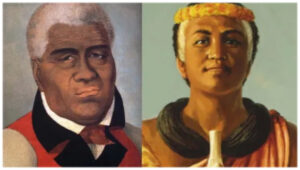 A large part of Kamehameha I’s success in conquering and uniting the islands was due to his savvy, favorite wife. After he died, she was responsible for the unprecedented seismic shift in Hawaiian society. Radical changes happened in Hawaii’s religion, traditions, and culture after his death.

When Captain Cook was sailing into Hawai’i, Ka’ahumanu, then 10 years old, was given to be married to the ambitious King Kamehameha I. She advised him in many ways that helped him in his long struggle to unite all the Hawaiian Islands into one Kingdom. 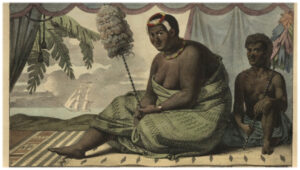 Since many of his enemies and adversaries were her family members, she knew them well. As a result, the King and his Queen had a strong bond.

She became his favorite wife even though he married 17 times.

It was an excellent time for Ka’ahumanu during their early years together. She learned to surf. Since she was inquisitive and open-minded, and she loved to talk and flirt.

However, the taboos of the Hawaiian religion stifled and frustrated her. Under the old religious rules, women had many limitations that did not apply to men. For example, they were not allowed to eat with men. In addition, they were forbidden certain foods like bananas, pork, and coconuts.

To further irritate her, as the wife of a chief, she was not allowed to sleep with anyone else but her husband. Her duty was to make sure that her child would be of royal lineage. Adultery was acceptable in ancient Hawai’i to the common people, but not to the ruling class. Ka’ahumanu resented and questioned the many taboos, which seemed arbitrary to her.

She wryly observed the violation of Hawaii’s sacred laws when Captain George Vancouver arrived bearing many gifts from England. The Queen watched as the foreign men shared food with women and were not struck dead as the Hawaiian religion foretold with certainty. 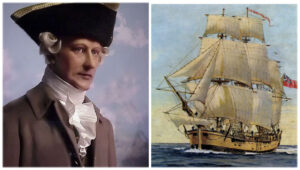 Keenly, she recognized that the traditional taboos, or kapu (sacred laws), were random and no longer held any power.

Queen Ka’ahumanu watched for her chance to change things.

She bided her time as she grew more and more distant from her husband. Although he continued to marry new wives, she remained his favorite. He clearly recognized he was in debt to her and owed much of his success to her.

They continued to live side-by-side with his many wives. But, Ka’ahumanu began to smoke a pipe and eat with the sailors from time to time.

Finally, when King Kamehameha died in 1819, Queen Ka’ahumanu was free. She tattooed the date on her arm and joined in the chaos that always would ensue after a great ruler’s death.

All the ancient taboos were gone overnight in the absence of the great King following his death. The women gleefully ate pork, bananas, and coconuts. Chiefs and commoners alike slept with whomever they wanted.

For a brief while, the old gods had simply vanished.

Queen Ka’ahumanu prepared for the grand initial appearance of the new, soon-to-be King, Kamehameha II (Liholiho). It was time to put her plan into action.

She welcomed Liholiho as he sailed toward the shores of Kailua on the Big Island. She greeted him wearing Kamehameha’s royal red and yellow feather cape. To Liholiho’s surprise, Ka’ahumanu declared to the people onshore: “We two shall rule the land.”

Ka’ahumanu became the first Kuhina Nui or Co-Ruler of Hawai’i. 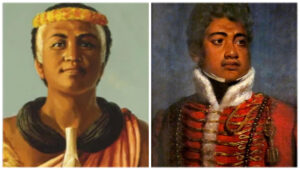 She baited the new King to come and eat at the table with the women, which had been strictly taboo for ages. She wanted to destroy the old Kapu System of taboos once and for all. They had restricted her for her entire life.

He took the bait and sat to eat with the women.

There must have been pin-drop silence as he began to eat.  Everyone waited for him to be struck dead by the angry gods! But, nothing!

The Queen and King Liholiho didn’t stop with the breaking of just one taboo.

They challenged the entire system of the old ways by challenging the power of the priests and temples. Even some sacred sites were destroyed. They were immediately challenged in a futile civil war to save the old Hawaiian religion, led by Chief Kekuaokalani and his wife, chiefess Manono of the Big Island.

The Hawaiian people were adrift into this vacuum – with no ancient religion, no beliefs to hang onto, no gods, and no roots.

Unbelievably, within just one year after Kamehameha the Great’s death, in 1820, the Protestant missionaries arrived. They found a nation hungry to fill their spiritual void with new notions of good and evil, right and wrong.

What Queen Ka’ahumanu saw in the foreign religion was a set of laws that she could enforce and finally gain the power she wanted.

She fully embraced the Christian religion.

She built churches and schools and finally became baptized as Elizabeth Ka’ahumanu. Indeed it was intentional that she named herself after the all-powerful Queen of England!

The monumental changes Ka’ahumanu unleashed during her time as the Regent, and Co-Ruler of Hawai’i continued on for years. With the Christian commandments came laws. Laws had to be enforced.

Finally, and most importantly, the whole idea of land ownership came into being for the first time in Hawai’i. That was a concept never experienced by the Hawaiian people, and they had no idea how to interpret what it was. 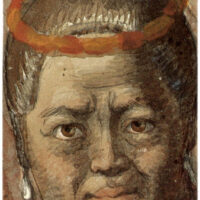 It was a time of tremendous chaos and change.

And it happened very quickly. The Hawaiian People were whipsawed back and forth by the competing powers and forces. It is a true testament to the enduring Hawaiian Values and the Hawaiian Culture that there have been two times of Renaissance since those days.

Twice, the Hawaiian People have forged ahead to capture lost traditions, a lost language, and a system of Hawaiian Values the ancients lived by.

Out of the fire and ashes, the phoenix arises. And the phoenix is the enduring Hawaiian Culture of Aloha and Mālama i ka ‘Āina. Always respecting and caring for the people, the land, and the sea.