Celebrating Over 130 Years of Japanese Bon Dance in Hawai’i 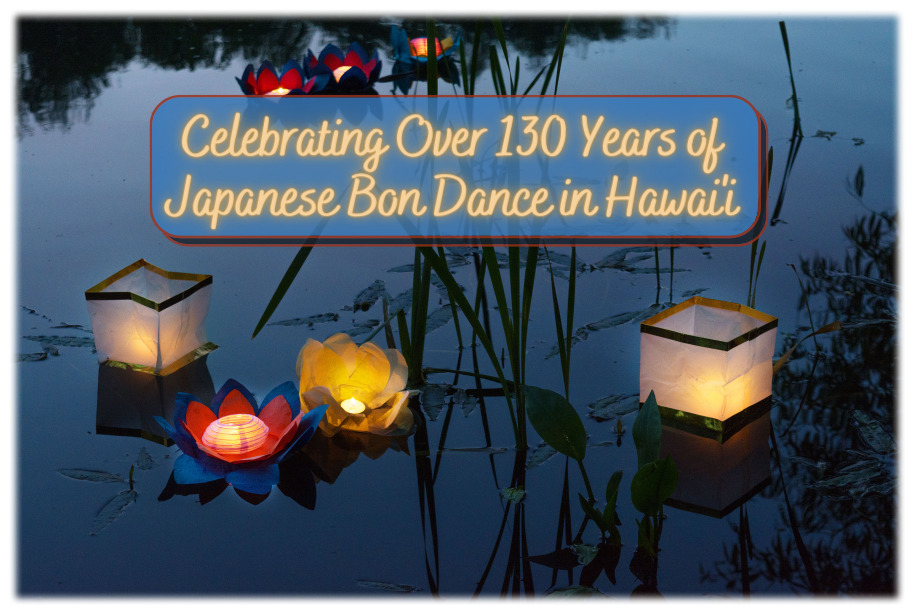 Bon Odori, AKA Bon Dance, originally from Japan, has been a Hawaiian tradition for over 130 years.

Bon Odori is a style of folk dance performed at festivals in Japan during the Obon season. Deeply important and influential in Japanese culture, Obon is as important as other cultures’ New Years celebrations.

The Obon season in Japan is a time to celebrate, respect, and remember family ancestors. These values mesh perfectly with the values held dear in Hawaiian culture as well.

Bon Odori came to Hawai’i with the Japanese Buddhist priests who followed the first Japanese immigrants to the islands.

On February 8, 1885, 900 Japanese immigrants arrived in Hawai’i looking for ways to make money and support their families. They had no problem finding work in Hawaii’s booming sugar cane industry.

The Japanese brought their strong cultural traditions and practices with them to Hawai’i. Some ancient traditions they imported were Bon Dance or Bon Odori, Buddhist Temples, and Japanese schools. They quickly established the first documented Japanese school in the United States.

Bon Odori started in Japan around 600 years ago.

It quickly became a popular yearly event in Hawai’i starting 130 years ago.

Bon Odori is also called the Festival of Souls, the Ghost Festival, or the Lantern Festival. In Japan, it is an annual, three-day holiday that is rooted in Japanese Buddhism. Therefore, people look forward to Bon Odori all year long!

Reflection during this time often focuses on renewing the dedication to living in the present moment of this day and honoring our debt of gratitude, especially to our ancestors, for this bountiful life.

“Obon is a joyful gathering to express appreciation to family and friends who have gone before me” – Betty Takeoka, a Big Island resident and member of Kona Hongwanji for more than 30 years.

Traditionally the Obon Festival lasts for three days in Japan. But in Hawai’i, people liked it so much it was greatly expanded and Hawaiian-ized! As a result, the Bon dance has since taken on a cultural significance throughout the islands.

Hawaiian people place importance on honoring their ancestors, history, and culture just as strongly as the people in Japan. Because of these shared cultural values, the Obon celebrations began to acquire the grand style of celebrating Hawaiians are so good at! Plus, the Obon season was vastly extended in Hawai’i from three days to the three months of summer! It now begins in June and lasts until September.

As we have seen from other Hawaiian festivities, such as the Lu’au, gathering together, eating, celebrating, and dancing are integral parts of the island culture. So, as Obon spread around the islands, it slowly took on many similarities to Hawaiian celebrations due to these similar cultural outlooks shared by Hawai’i and Japan.

On each island, a different Buddhist temple hosts an Obon Festival each weekend.

Traditionally, Bon dances are just one facet of Obon Festivals. In the traditional 3 day festival, the first day is dedicated to welcoming the ancestral spirits home. Offerings of green tea, sake, lotus-shaped sweets, and rice are placed around family altars and graves.

Obon is a joyful memorial, welcoming home the ancestral loved ones. 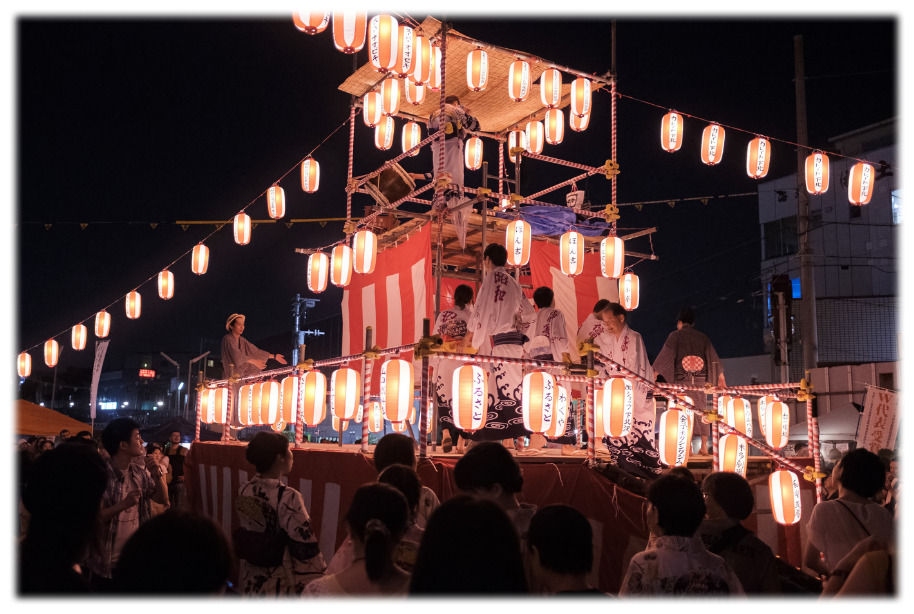 The second day is spent celebrating! The spirits’ homecoming inspires festivity. Stages are built where Bon Odori will be performed. Booths with Japanese treats, games, food, and small shops create a carnival atmosphere. Often there are rides and special foods particular to a Japanese summertime.

The original Bon Dances in Hawai’i are believed to have been done between the early migrants’ houses and the cane fields where they also worked. The joy of coming together with friends and family to dance, wearing colorful yukata attire on a hot summer evening, is a special memory for everyone.

Because of Hawaii’s multi-cultural society, the Obon Festivals here in the islands are filled with people of many ethnicities, religions, and cultural backgrounds. In addition to the Japanese Buddhists dancing the Bon Dance, Protestants and Catholics join in. Plus, you can find Filipino, Chinese, Korean, Portuguese, Native Hawaiian and Caucasian people all participating in the celebrations. Those who love to Bon dance, even if they are not church members, look forward to dancing and just having fun.

You will also find many favorite summertime foods, from hot dogs and hamburgers to local treats such as shave ice, saimin, and Okinawan donuts. Plus, enough traditional Japanese delicacies to satisfy everyone’s festival food cravings!

For many local folks, the neighborhood Bon dance is like a homecoming. It is the place they went to as children. And now, they have the fun of returning as adult parents or grandparents with children in tow. 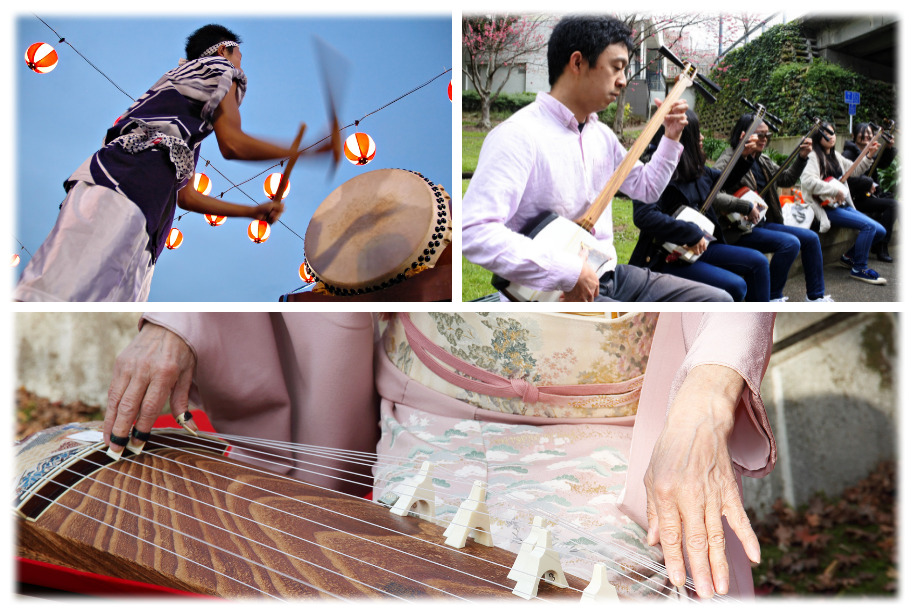 The music of Obon is often traditional songs or music played by musicians on various instruments. You may hear a flute, shamisen, koto, or even a taiko drum extravaganza! The music, lanterns, food, and dancing are perfect ways to invite the ancestors to come into town and join their relatives for the Obon celebration.

Once the festivities are over in Japan, the monks in Kyoto, traditionally light many small bonfires on the side of the local mountain. These fires are in the shape of certain words, spelled out in Japanese Kanji. This helps guide the ancestor’s spirits back to the spirit world. This is known as the Gozan no Okuribi, the culmination of the Obon festival.

Another version of Gozan no Okuribi that you will see in Hawai’i is the lighting and floating of paper lanterns out onto the water, guiding the ancestors back. 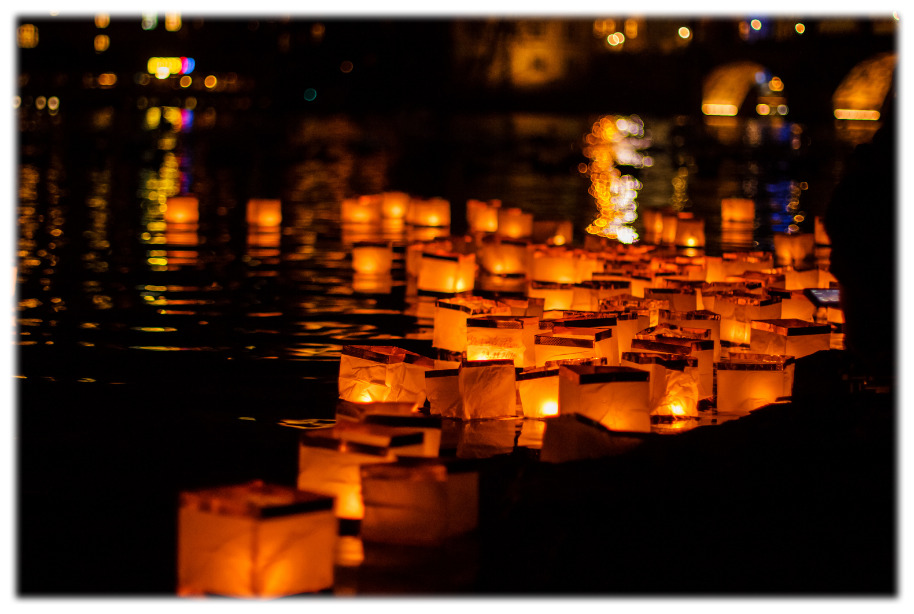 So, when coming to Hawai’i in the summer months, listen for the lilting flutes and taiko drums. When you see strings of lanterns glowing against the night sky, you will know it is Obon Season. And, remember, Bon Dances will be happening soon at the Japanese Buddhist Temples all across the Islands. They are celebrating the many family reunions of the living and spirit world family members.

It is a happy, joyous occasion – jump in and dance. Copy the movements of others and have some fun!