Feast Your Eyes! Look at the Favorite Ono Grindz of Hawai’i 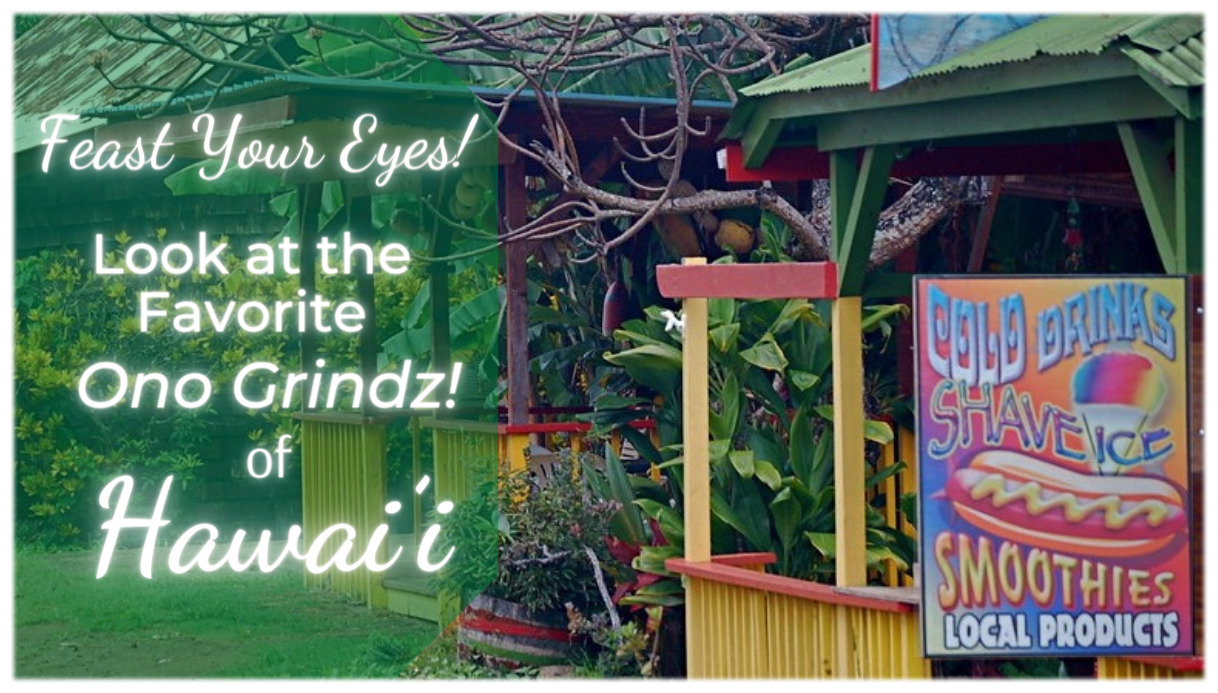 The people who live in Hawai’i tend to live an active lifestyle centered around being outside.

As soon as their work is pau*, the outdoors calls. Things like surfing (body, board, wind, kite), SUP (stand-up paddling), paddling (canoe, kayak), snorkeling, swimming, running on the beach, or hiking to a waterfall with a freshwater pool. There are all types of hunger-producing activities. And when their day is done, and it’s time to eat, they go straight for several classic Hawaiian dishes they will simply describe as Ono Grindz*!

Everyone has their favorite Ono Grindz. Today, we will visit a few of the distinctive foods which everyone here on the islands loves.  A collection of yummy foods brought from the many various cultures and nationalities that merged together into the perfect combinations we taste today. Combinations that are now universally accepted as brok da mout* worthy!

If you want to be a prizewinner at your next gathering, you must show up with a Family Size tray of poke (pronounced po-kay). In Hawai’i, some people will tell you that poke isn’t just one of the island’s most famous and favorite dishes, it’s A Way of Life!

Make sure you have some of the three favorites: 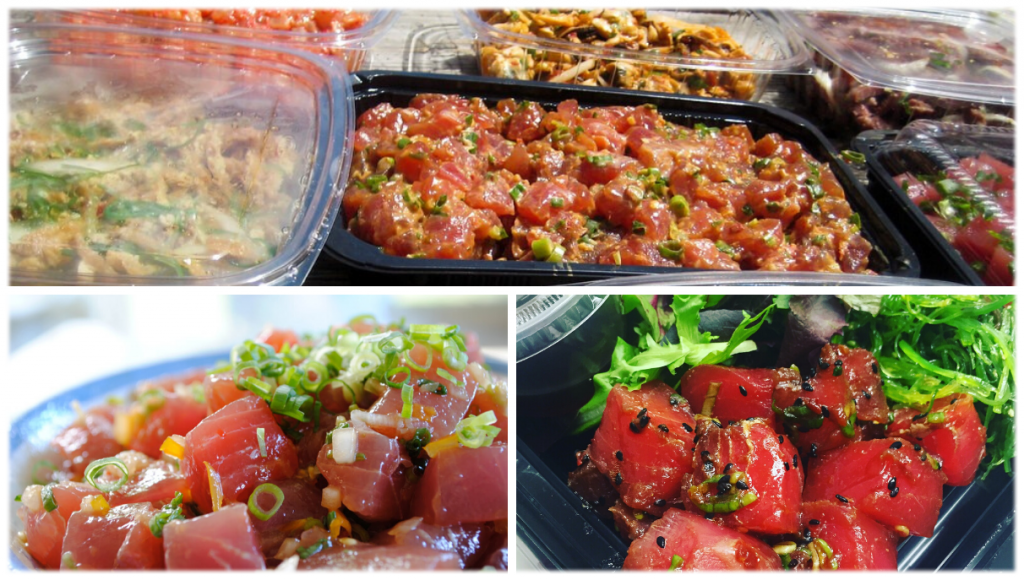 You will find these front runners anywhere there is poke available and they will be the first tray to be empty after the lunch rush. Another of the latest favorites in Hawai’i is the Poke Bowl. You choose what type of poke you want to go on top of a scoop (or two) of hot rice. Onolicious*!

The array of flavors and combinations increases continuously. Combinations for poke are virtually endless, as long as seafood is involved – whether it’s he’e*, ono*, squid, mussels, crab or salmon, and more. The possible preparations can make it even better, depending on your mood and creativity. Eating it while drinking a beer is an old standard. But wait! What about searing some poke for Taco Tuesdays? Sort of sacrilegious, but once again, brok da mout!

The Bento (ben-toe), also known as the Plate Lunch, follows the tradition of all cultures, where the noon-time meal is made up of several favorites all on one plate. Usually, one main plus three sides. Due to the cultural and gastronomic melting pot of Hawai’i, you can find a blending of choice foods from Japan, China, the Philippines, Korea, and Portugal. Even traditional Hawaiian Lū’au is an option for a plate lunch! Now that is WAY too many choices! 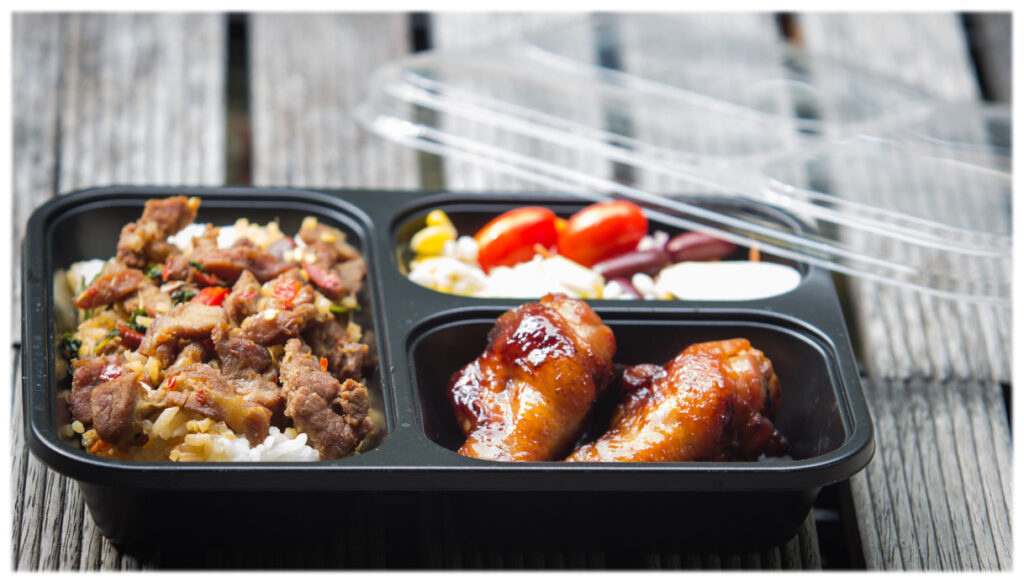 The History of Plate Lunch

In the 1880s, the plate lunch began as a “Box Lunch.” It was the midday meal for immigrant workers in the booming pineapple and sugar plantations all over Hawai’i. The field workers would bring their hearty noon-time meals to eat together on their lunchtime break. The meal was usually in a box that was filled with rice as a side, plus the leftover meats from the previous night’s dinner.

And then, in the 1930s, lunch wagons began to pop up near the break areas and cater to these hard-working laborers. The lunch wagons changed the boxes to paper plates, with the modern invention of divided sections.

Alas, the Plate Lunch was born!

The plantation era ended by the mid-1950s.  By then, the plate lunch was cemented into the hearts of the local culture. It has remained a staple on all the islands since.

One of the classic providers of this local staple is the L&L Drive Inn, which originated in Honolulu. L & L Drive Inn has since expanded to locations in over six states on the mainland*.

It would be a glaring oversight, not to mention another all-time favorite – the Loco Moco. Everyone needs to know about this influential and iconic creation. The Loco Moco is found everywhere, from tiny Hole-In-The-Wall places to Five Star, high-end restaurants.

You can have Loco Moco for breakfast, lunch, or dinner!

Typically, it consists of a bed of white rice topped with a hamburger patty and a fried egg and smothered in rich, brown gravy! Again, there is an endless array of combinations and styles. If you double the patty and eggs, it is called a Heart Attack Moco to (here we go again) one called the Brok-da-Mout Moco! 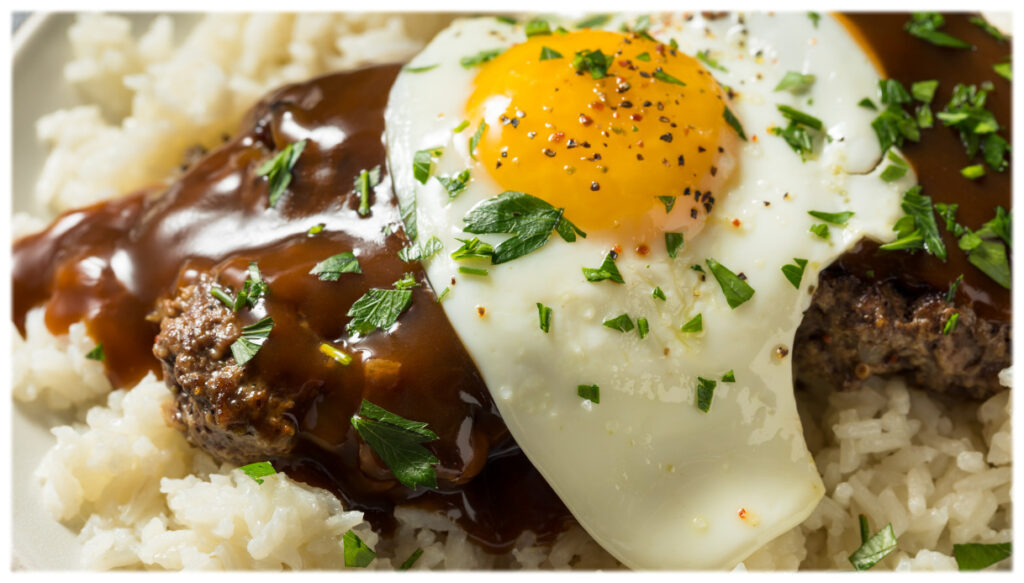 Loco Moco is for enthusiastic eaters. They’re known to cause a kanak attack*, which is pidgin for eating so much you need a nap. To get the full flavor experience, break the eggs to ensure you get a little of everything in each bite.

Café 100 in Hilo is often credited with inventing the loco moco. The diner, which opened in 1946, features 30 types of this iconic dish. Originally the price was only $3.50 and is still one of the most popular.

Before we move on to the subject of how to choose quick, “local style” snacks, our last mention will be ANYTHING NOODLES.  Once again, there are three favorites:

Because of the considerable Asian influence in Hawai’i since the middle of the 20th century, noodle dishes have become a staple in island dining. At any gathering, large or small, you will see at least one of these noodle dishes next to a large pot of white rice. 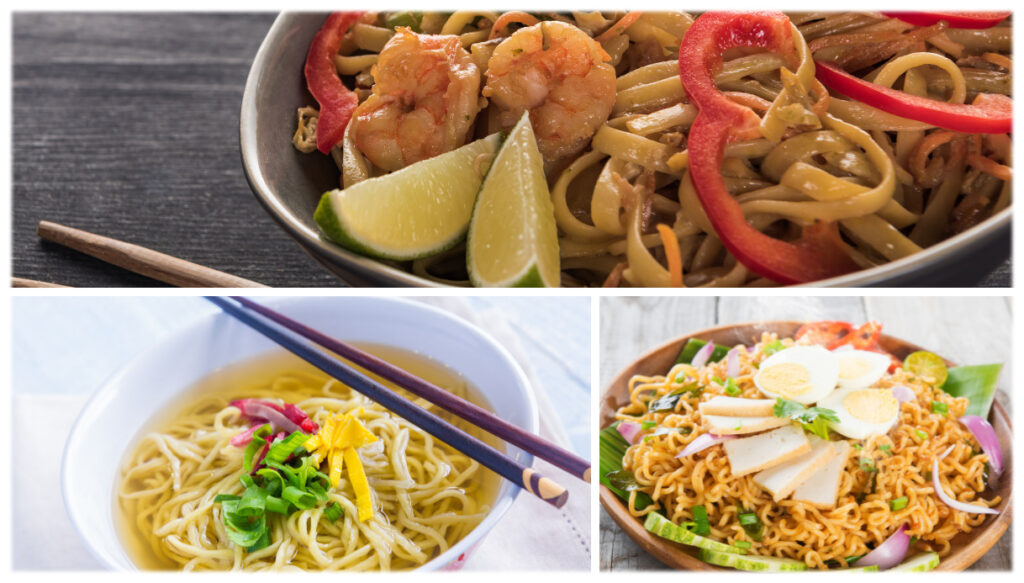 And now, on to our Top Three classic delicacies in the “grab and go” category, delicious snacks for visitors and locals alike.

Spam Musubi (spam moo-soo-bee) – Spam Musubi had its birth in Hawai’i during World War II. Because of the high-calorie content (1080 calories per can) and the long shelf life (three years), Spam dishes were the perfect rations for troops everywhere.

After the war, a surplus of Spam filtered out to the civilians. And then, the Japanese snack called onigiri* was paired with Spam to create the ubiquitous snack we now call Spam Musubi. Nowadays, you can find Spam Musubi almost everywhere, including Gas Stations. The Hawaiian Power Bar! 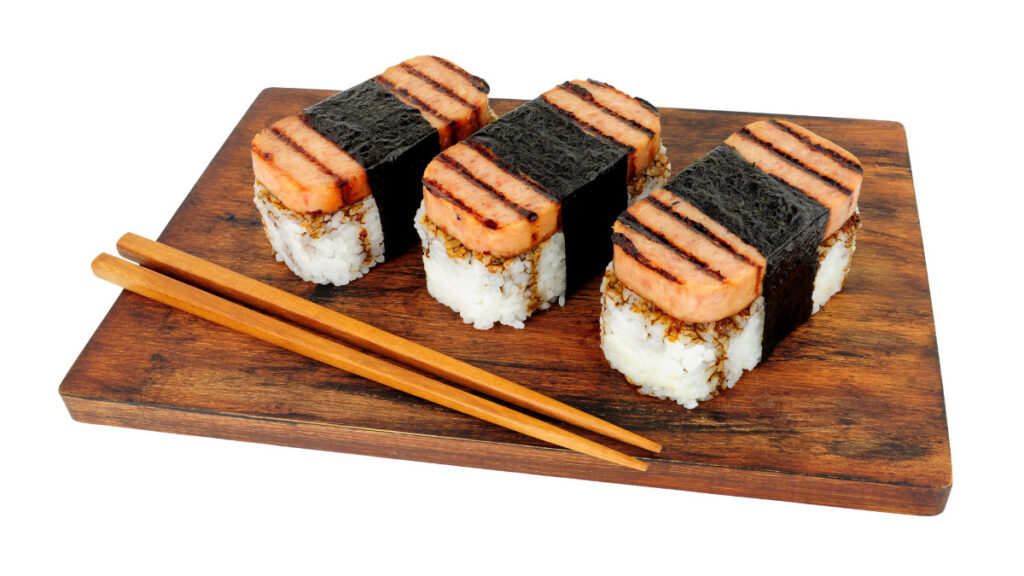 Hawaiian Shave Ice – Unlike its sister, the snow cone, which is made with crushed ice, Hawaiian Shave Ice is made with just that: shaved ice. So much better! A large block of ice is shaved to create white ice mixed with small water particles. It is the consistency of snow, fine and fluffy.  This texture holds the flavors of the syrup so that each bite is onolicious.

Shave ice has all the classic flavors, but we encourage you to try tropical fruit flavors like guava, lilikoi*, coconut cream, li hing mui*, mango or lychee.  And of course, if you are brave enough to step outside the flavor box, Shave Ice with Red Bean Topping.  It’s delicious! 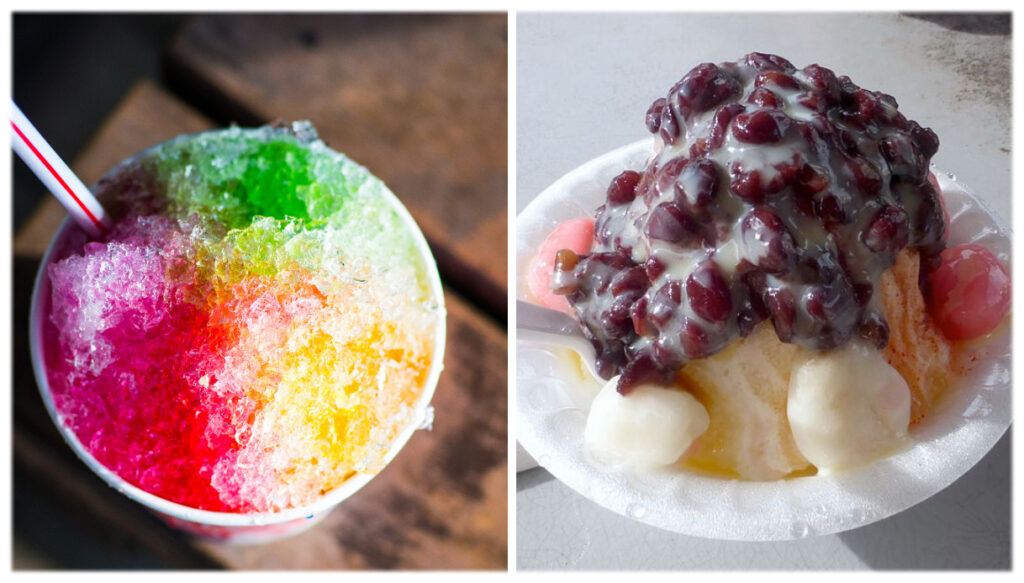 The history of li hing mui and umeboshi* is a whole blog in itself.  In a nutshell, we are talking about dried, salted plums. These plums came to Hawai’i thanks to the Chinese (li hing mui) and the Japanese (umeboshi).  As the snacks evolved, local people began to include other fruits, such as mango and pineapple, in the drying and salting process. Eventually, the process included salty and sweet varieties of dried fruits.

Over time, the salted, dried snacks were all grouped together and called crack seed in Hawai’i.

Now, there is even a dried, salted plum powder that you can put in a smoothie or around the rim of a margarita glass!

You can find crack seed snacks packaged individually in a drug store or market, or you can even pop into a whole store specializing in Crack Seed and pick up an assortment.  Their flavor is very unique, and many have called it addictive. Some people never leave their homes without a bag of crack seed stashed away for a “quick fix!” 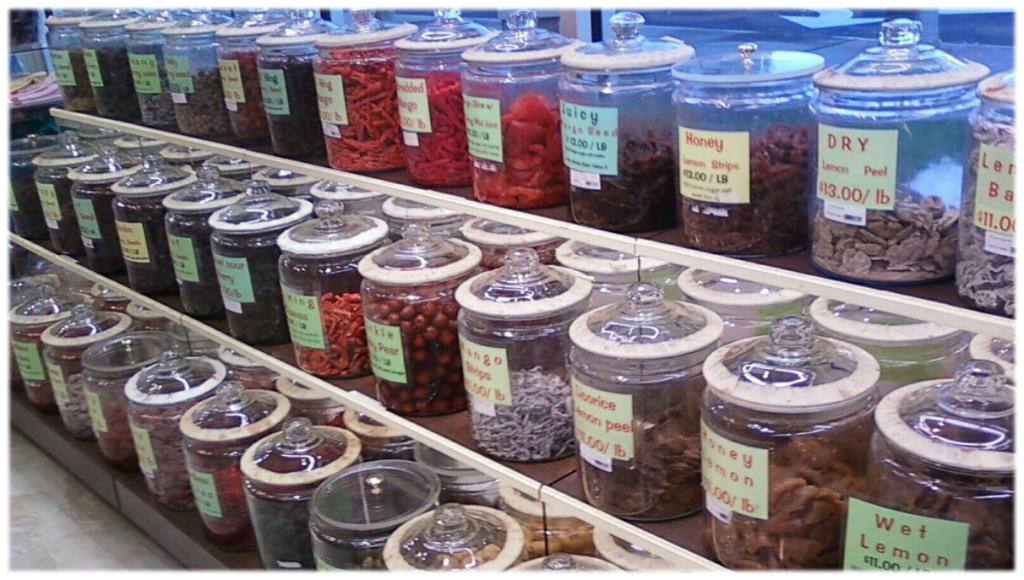 We’ve had our Loco Moco breakfast, our Plate Lunch, and a few snacks along the way. What shall we have for dinner? Maybe a little poke and Dry Mein?

Be sure you try all these unique flavors and textures on your next visit and discover the Hawaiian “Foodie Paradise!” You won’t regret it!

TAKE IT ON THE ROAD!

When the people born and raised here in Hawai’i leave home, like anyone, they will miss their local delights.

When there is no nearby source for Ono Grindz, islanders away from home depend on care packages. The package is going to have many of the non-perishable delicacies mentioned in this blog. Or, when relatives come to visit their Hawaiian family or friends on the mainland, they will bring some of the fresh goodies in their suitcases (especially Spam Musubi).

Along with the fresh items will be a gorgeous, fragrant lei*. But most importantly, they will bring their Aloha. And, that is the best food there is!

Brok da Mout – So good you can’t speak, your mouth is broken

Kukui – a tree, also known as candlenut, because the oil from the nuts was used to light the way

Mainland – Island reference to the North America, particularly the USA

Onigiri – Japanese snack where rice is compacted and wrapped in nori, a black seaweed paper

Ono – delicious -OR- Ono – a fish called wahoo, related to the king mackerel

Ono Grindz – delicious food – Ono is delicious; to “grind” – to eat. “Grindz” what you are eating, or grinding in your mouth