The Sound of the Past, Bringing in the Future 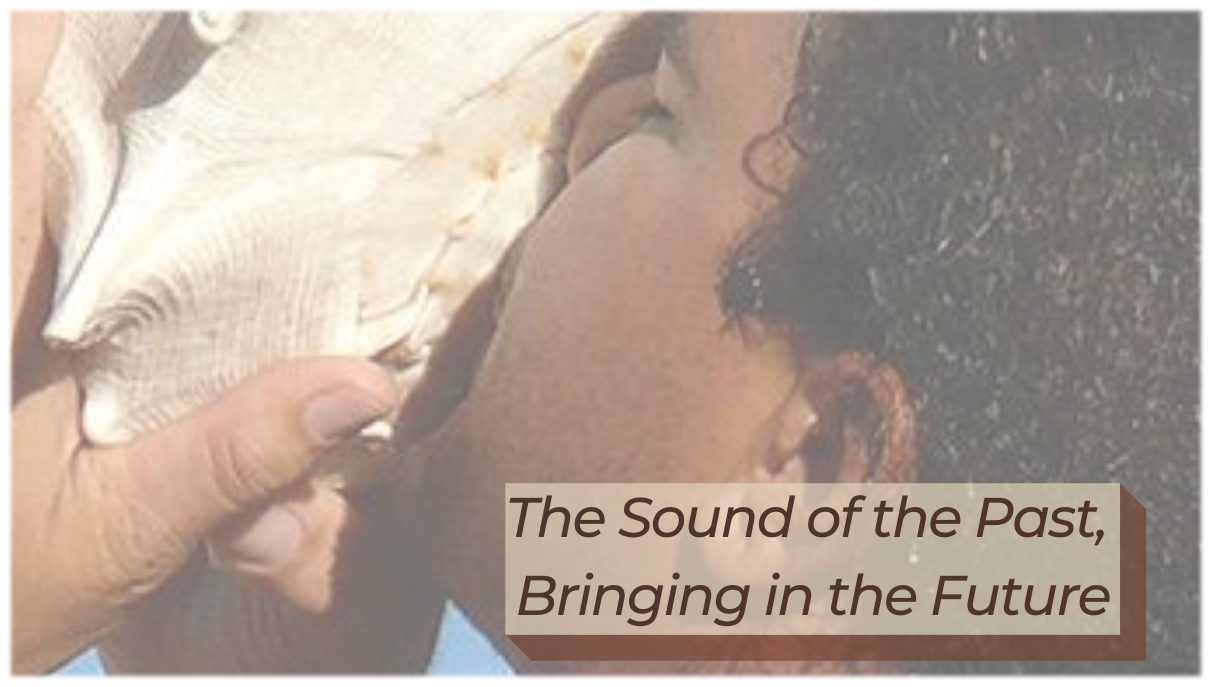 For countless generations, the sound of the pū* would broadcast the arrival of Ali’i*, the beginning of protocols, the coming of canoes, and the setting or rising of the sun. It was even used to call Ke Akua*!

In more modern times, it calls a gathering to attention at the beginning of an event, blesses a home, or begins a wedding ceremony.

The use of the pū is an ancient custom. It sends out a sound that has echoes from the past. It is a fluid marker of essential moments, a thread that is woven throughout the lives of those who grew up with its haunting and powerful sound.

With a single, expressive note…

…it connects all the joys and sorrows from yesterday to today, calling forth the past, present, and future. It can serve as the trumpets announcing the arrival of the king or be a type of spiritual silence in one forlorn note.  It summons a time of respect and significance for people far and wide across the planet. 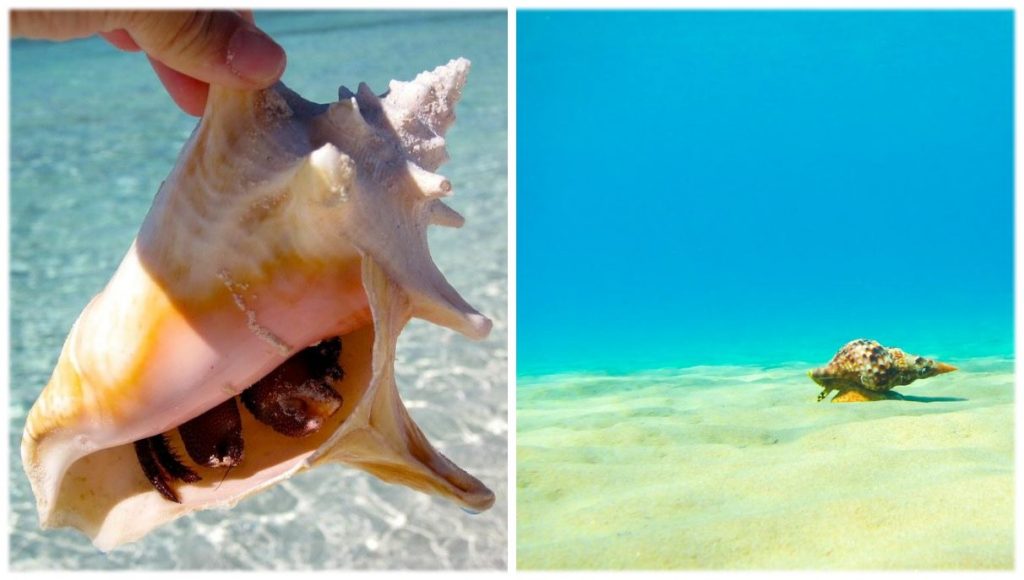 The sound of the pū is heard all across the thousands of Pacific Islands.  You can hear it anywhere the large snail shells called Triton or the conch shells are found.

The act of Blowing Shells has different names across the world:

Around 300 BC, in the Greco-Roman era, the large conch shell was named after Triton, the fish-tailed, Mer-man, Demi-God of the Sea. Triton, who was the Son of the main God of the Sea, Poseidon, used to blow the conch to calm the waves.

In Hawai’i, there is a strict protocol that comes with the honor of blowing the pū. 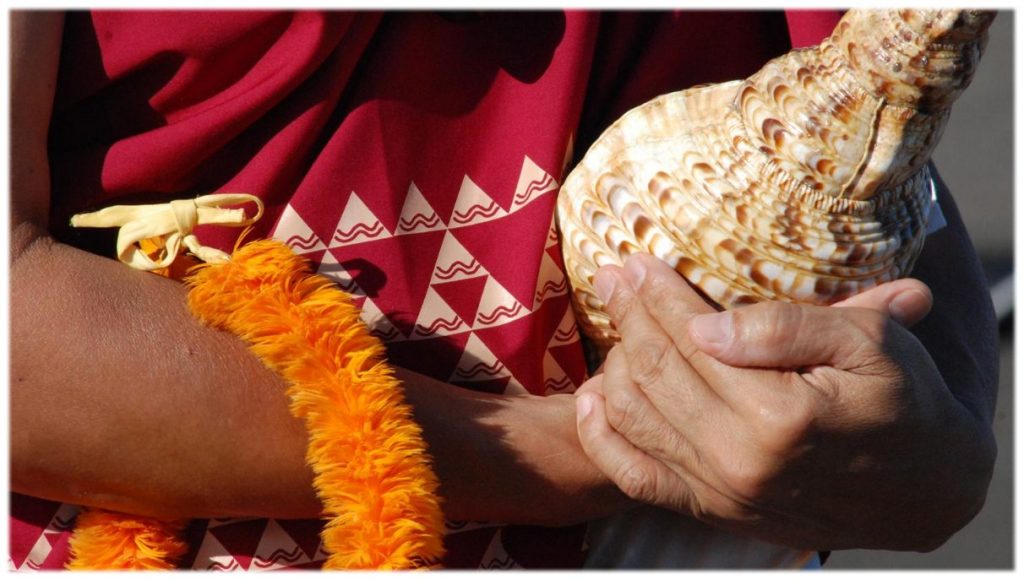 For 51 years, every day, you could hear the sound of the pū at sunset at the Ilikai Hotel in Waikīkī*.

Babe has been seen and heard by thousands throughout the years. His reach goes far beyond his nightly sunset ritual, which included lighting the torches fronting the water as night fell.

A poised, regal figure, wearing the traditional malo* and kīhei*,  Babe Bell has been there, whenever blowing of the pū was needed. 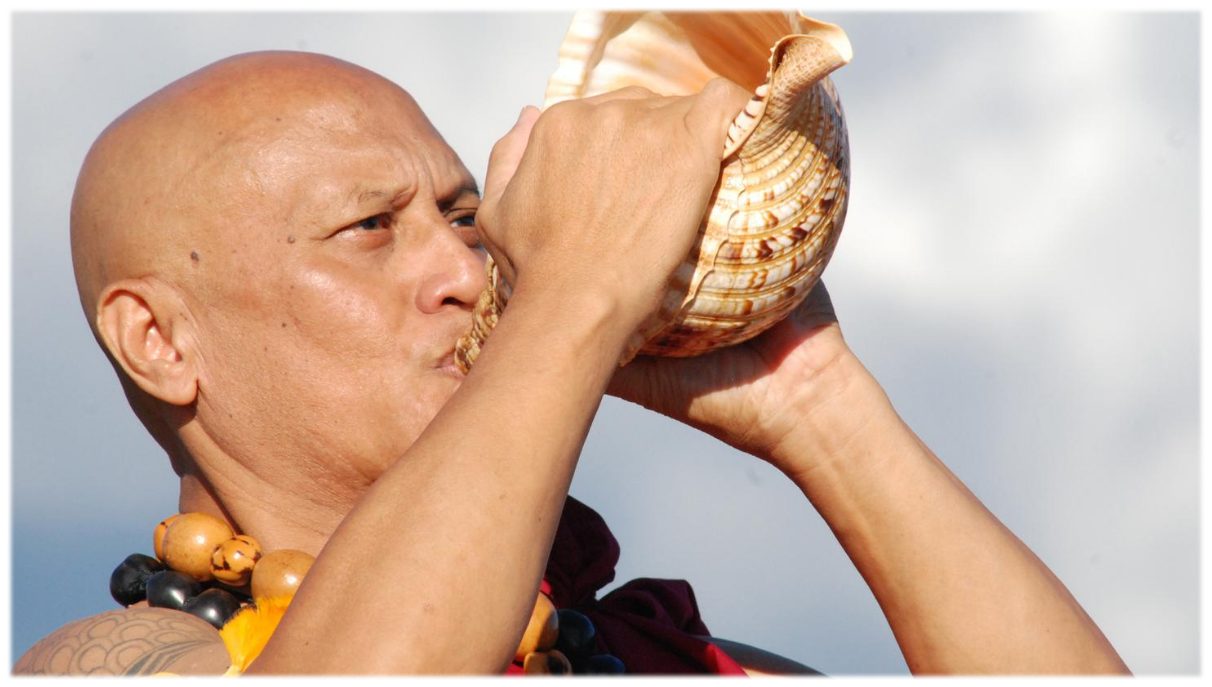 He has been at ceremonies and events at ‘Iolani Palace* or with hālau hula*. He was there for the departures and arrivals of the great, sea-faring Hawaiian canoe, the Hokule’a, before and after her trips sailing around the world.

His blowing of the conch was the greeting heard by the Emperor and Empress Akihito of Japan, who visited Hawai‘i in 2009. He blew a mournful pū during the traditional Hawaiian send-off to Hawaii’s beloved Israel Kamakawiwo‘ole after the singer died in 1997. After the blowing of the conch, 100s of paddlers and canoes entered the sea to honor Braddah Iz.

These are the places and events, throughout the years that the legendary Babe Bell, skillfully shared his mana*.

Next time you are here in the islands…

…remember the eons of history embedded in the simple act of blowing the conch. The centuries of people just like you, living on these beautiful lands, who would blow the pū at sunset for all the many reasons we have shared. 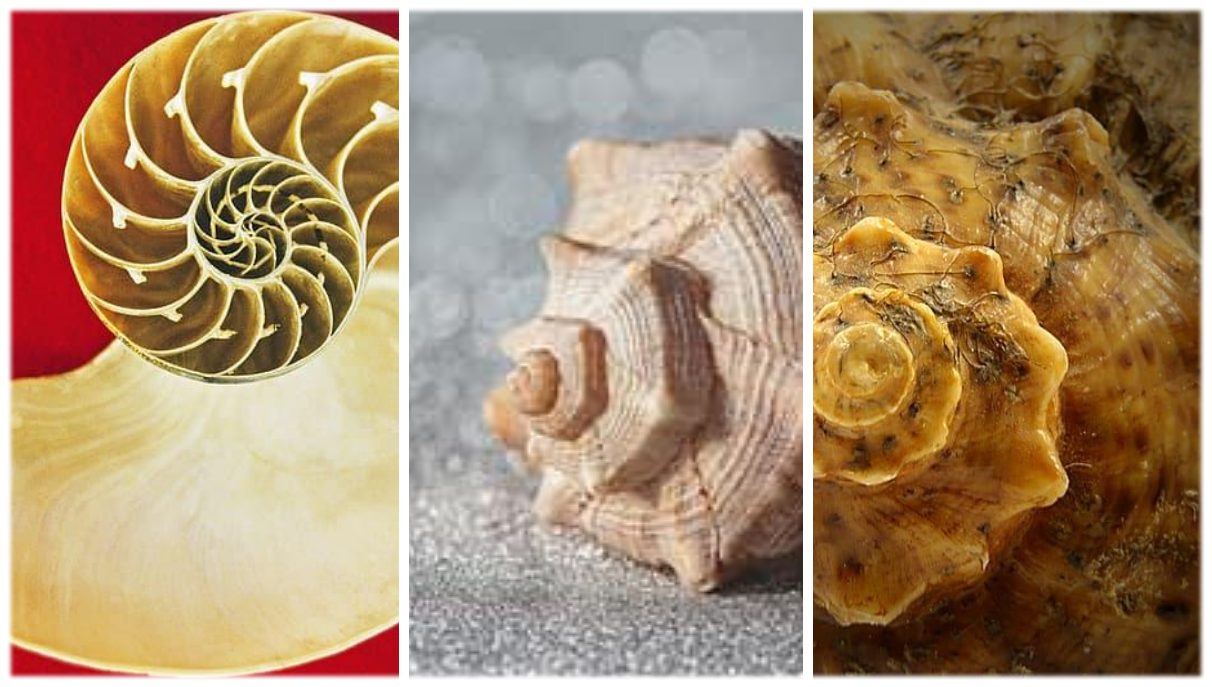 Perhaps you’re at the beach or your favorite spot for sunset cocktails, when torch lighting begins, and you hear the sound of the pū.

Maybe you’re walking along the shoreline and happen across a beach wedding where the bride is called forth with the pū.

Or, on a more somber note, you come across a memorial service and scattering of a loved one’s ashes into the sea from the Hawaiian canoes. You hear the pū as it beckons the ancestors’ spirits to bring their loved one home. 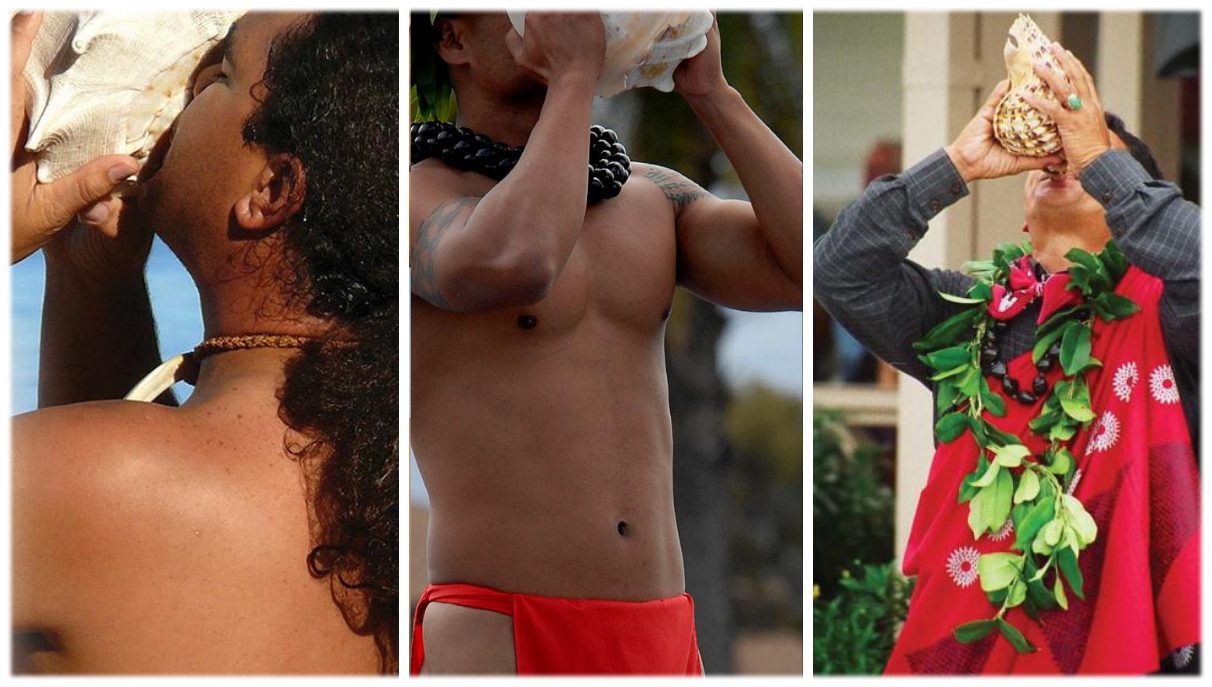 Each of these ceremonies begins with the blowing of the pū. Whatever the occasion, allow yourself a moment of silence and reflection to appreciate being exactly where you are in this special place.

Ilikai – horizon, surface of the sea

‘Iolani Palace – the ONLY Royal palace in the USA, ʻIolani Palace was the royal residence of the rulers of the Kingdom of Hawaii.

Mana – to have or occupy the position of power, divine power, voice of authority