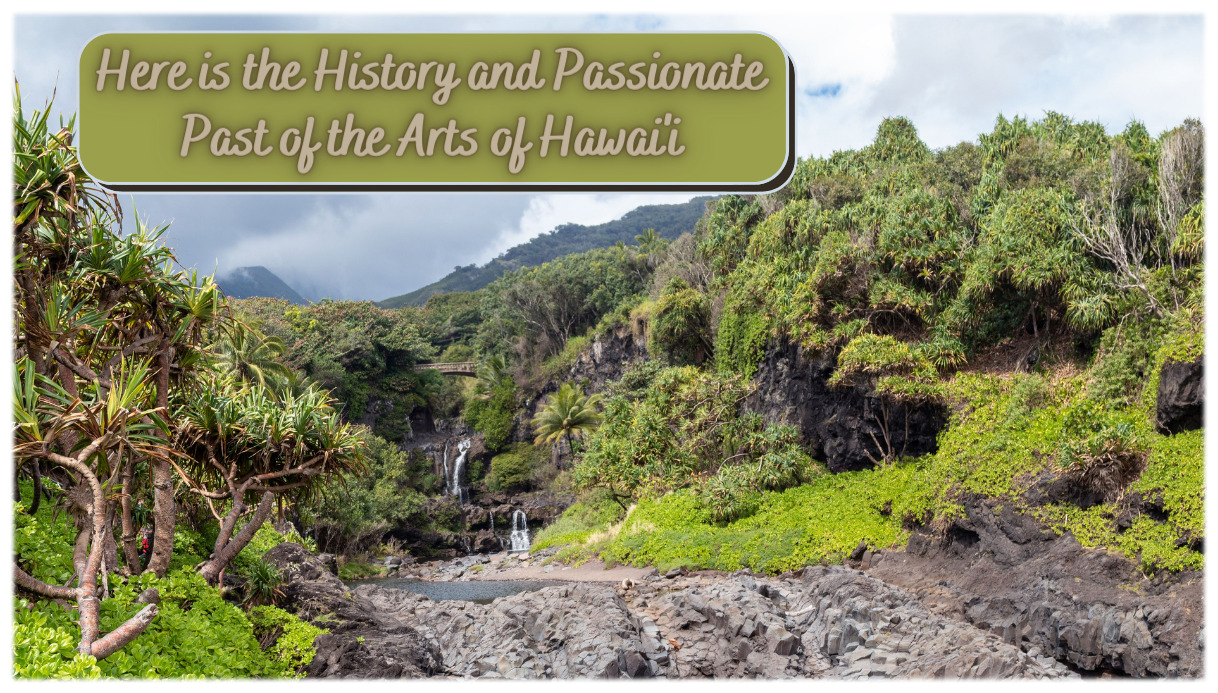 Hawaiian Arts is a vast subject, rich and varied, with intriguing stories and history reaching back almost 2000 years.

That was when the nomadic Polynesians finally arrived at their last stop in their Pacific exploration and migration, the Hawaiian Islands.

This journey covered over 16 MILLION square miles of open ocean, 137 islands, and took around 800 years. And, it was all done on ocean-going canoes using traditional navigation methods, not utilizing any instruments. You can learn more about this and Hawaii’s double-hulled ocean-going vessel, Hōkūleʻa, here.

The Polynesians settled on every inhabitable island.

The centuries up to 1778, when the western explorer Captain Cook first arrived, were the first of three stages of Hawaiian Arts, the pre-contact era. During this time, there were no metals or woven cloth. So, most Hawaiian Arts consisted of woodworking, feather work, bark cloth making, weaving, carving petroglyphs, and giving tattoos. Here, you can discover more about Hawaiian Tattoos.

Once western ideas and materials were influenced on the islands, a few native craftsmen continued to produce traditional Hawaiian Arts. These craftsmen who carried on creating art in the ancient ways are the primary reason these old techniques and customs didn’t completely disappear.

The second stage of Hawaiian Arts began after 1778, when the ships from outside of Polynesia, the Westerners, arrived in Hawai’i. After the discovery of Hawai’i, people started visiting the islands. Among these visitors were many professional and amateur artists. They brought their supplies and began documenting these beautiful islands, the people, and the customs. Many were hired for just this exact task. Artistic visitors started arriving in the early 1800s and have continued coming to this day.

Louis Choris, a French painter, was one of the earliest visitors. He was employed as a sketch artist for expedition research. Here is his painting of Honolulu Harbor from 1816. 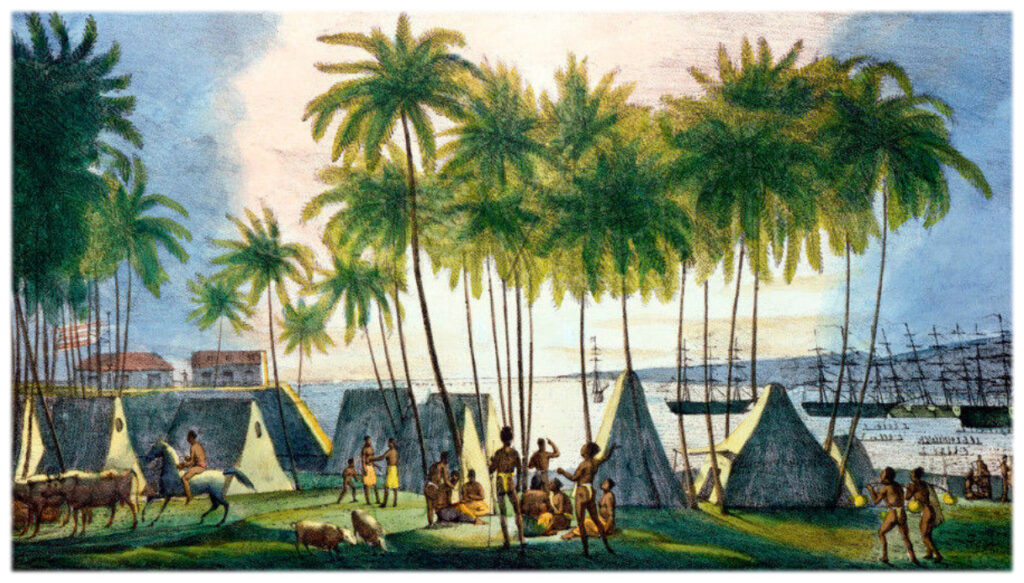 This blending of arts is quite striking! One way to understand this blending is to read about the introduction of Quilting in Hawai’i.

Today, we will share some knowledge about the Arts of old, the pre-contact art, as we like to call it. Imagine a Hawai’i before any western or other outside influence. People created beauty using local, natural supplies while sitting outside their grass hut near the sea. These artists would be weaving or carving while fishermen brought in the day’s catch.  You could see surfers as they played in the waves, and children were playing their made-up games. 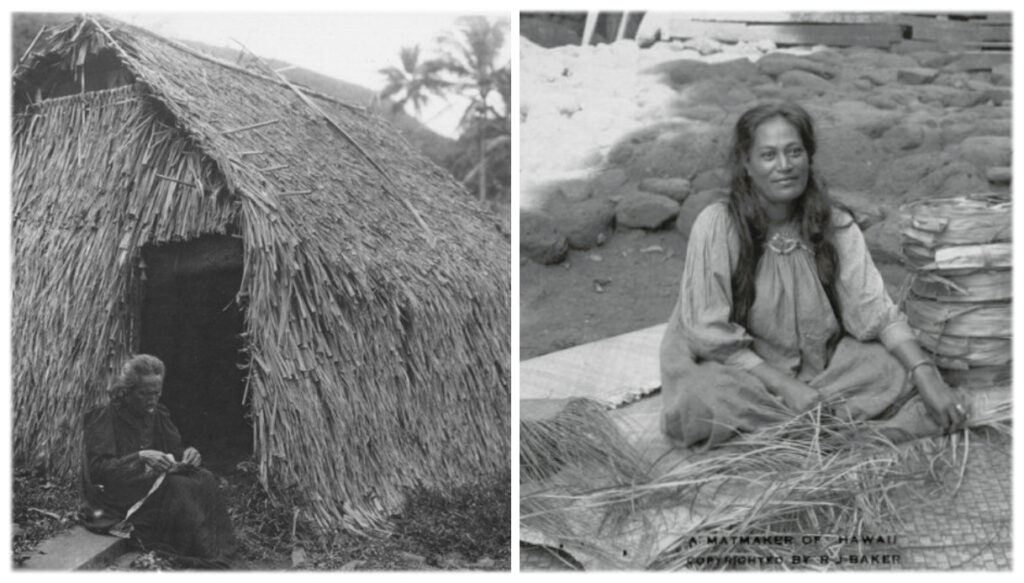 The Ancient Art of Woodcarving

Canoes and Ki’i were the 2 significant forms of wood carving.

Ki’i are symbolic statues representing akua, the many Hawaiian deities, Gods, or cherished ancestors. They were the talisman of the Hawaiian religion and were traditionally carved by a particular class of priests who were carvers. Hence, they were called kāhuna kālai ki’i. 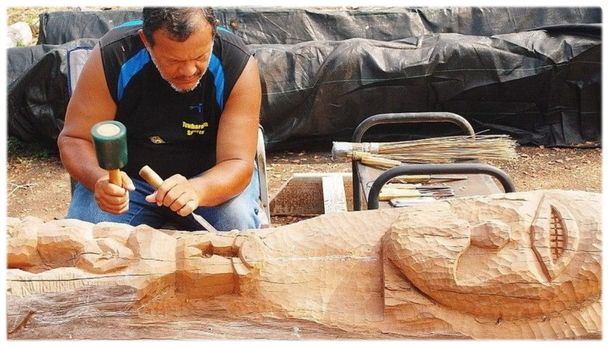 Although they were primarily carved from wood, they were occasionally decorated with feathers, bones, teeth, sea urchin spines, or other materials. Sometimes these artifacts were also carved from stone.

Canoes of all sizes were carved from wood. Finding the most colossal Koa tree in the forest meant a future canoe of immense value. Canoes were used for the transportation of people and goods. Warring canoes were often double-hulled, two massive logs joined together to be able to bring more warriors to the battlefields.

The Ancient Art of Weaving

Every family had weavers who turned the dried Hala leaves into a table or floor mats, baskets, pillows, mattresses, fans, clothing, thatching, and sails. 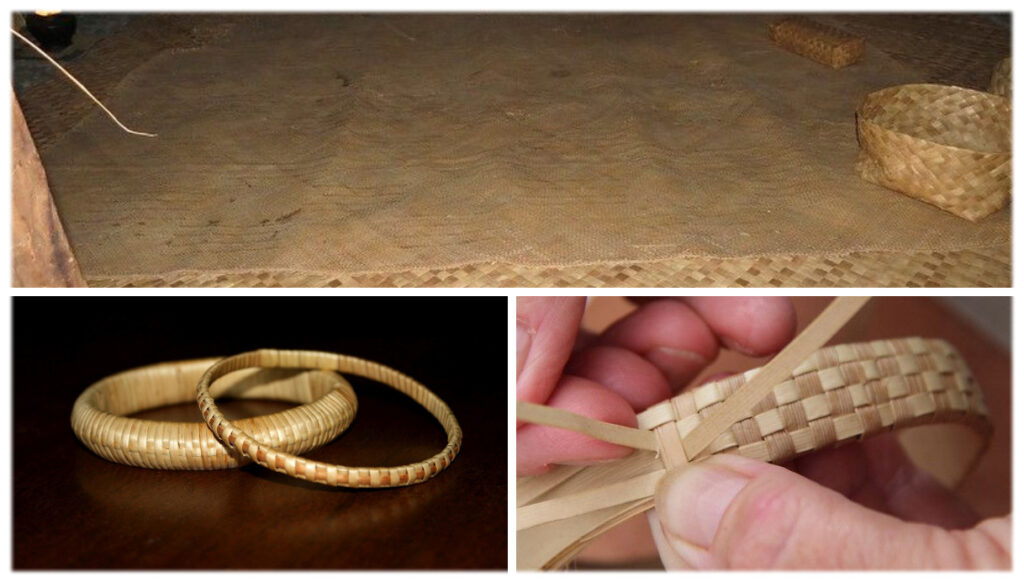 The leaves were collected, already dry from the ground, or pulled off the tree if they had not fallen yet. It takes time to process the leaves and make them soft and pliable for weaving. There are spikes on the edges of the leaves and often down the middle spine. Each leaf must be stripped of the spikes, cleaned, and softened before weaving can begin.

The process of weaving extended to other plants and grasses. The smaller the grass, the softer the mat for sleeping.

The Ali’i (Kings, Queens, Chiefs, and Chiefesses) would always have the softest sleeping mats. Weavers to the Ali’i would weave for a time, and then someone would come and take over for them. The new weaver would always take out some rows before they started. This was done to remove any bad thoughts or energy the last weaver may have left behind in the piece at the end of their work. 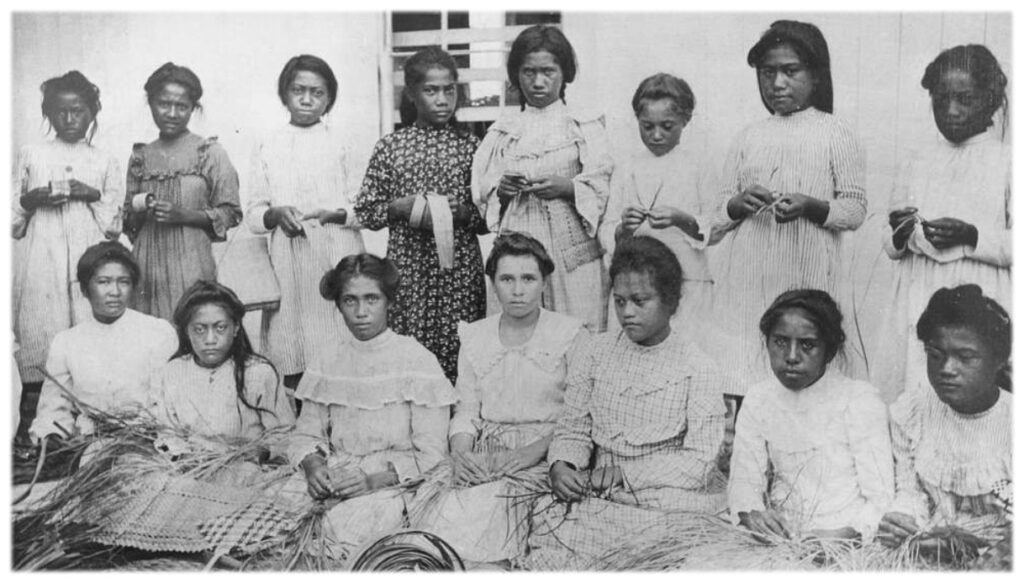 Barkcloth, or Kapa, is made from the inner bark of a mulberry tree.

A story says the tapa made in Hawai’i was, and still is, the most technically sophisticated, aesthetically diverse tapa in the pacific. It is not surprising, as many varieties of Mulberry trees were brought to Hawai’i, increasing color value and textures.

The inside bark is stripped out and soaked and pounded or beaten. This process is repeated until the fibers are slowly blended together, and a fine cloth ensues. 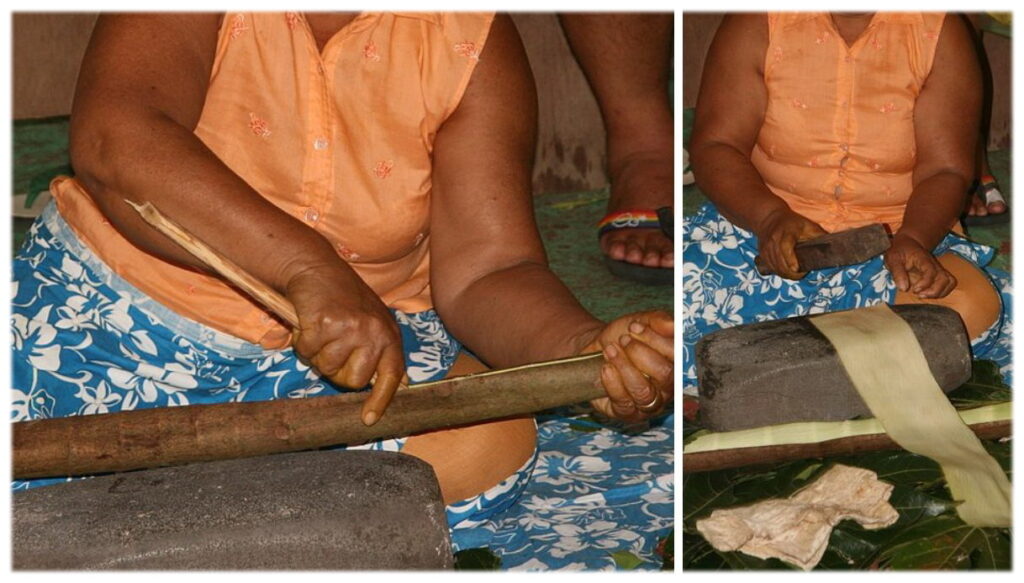 Coverings, loincloths, skirts, and adornments were made.

“Those who knew how to make coverings and loincloths, skirts and adornments and all, made the wearers look dignified and proud and distinguished.” – Samuel Kamakau, Hawaiian historian, 1870

When the early missionary wives arrived, they thought the Hawaiians wore a fine cotton cloth. They were amazed it was pounded from a plant.

Many Hawaiian Arts came close to being lost after two hundred years of upheaval. The native culture was overwhelmed by the many new and completely different cultures introduced to Hawai’i over those two centuries.

Today, some experts have researched, learned, and brought back the old ways and have gone to great lengths to preserve these ancient styles and customs. In the traditional Hawaiian way, these things are now kept for generations to come.

It is a way that Hawaiians can reconnect with their culture and customs of the past that were nearly forgotten and then pass them far into the future.

Seeing and even participating in these arts and their legacy is a gift. It is something important to Hawai’i and also for the world.