Tattooing – A Gift to the World from Hawai’i and Polynesia 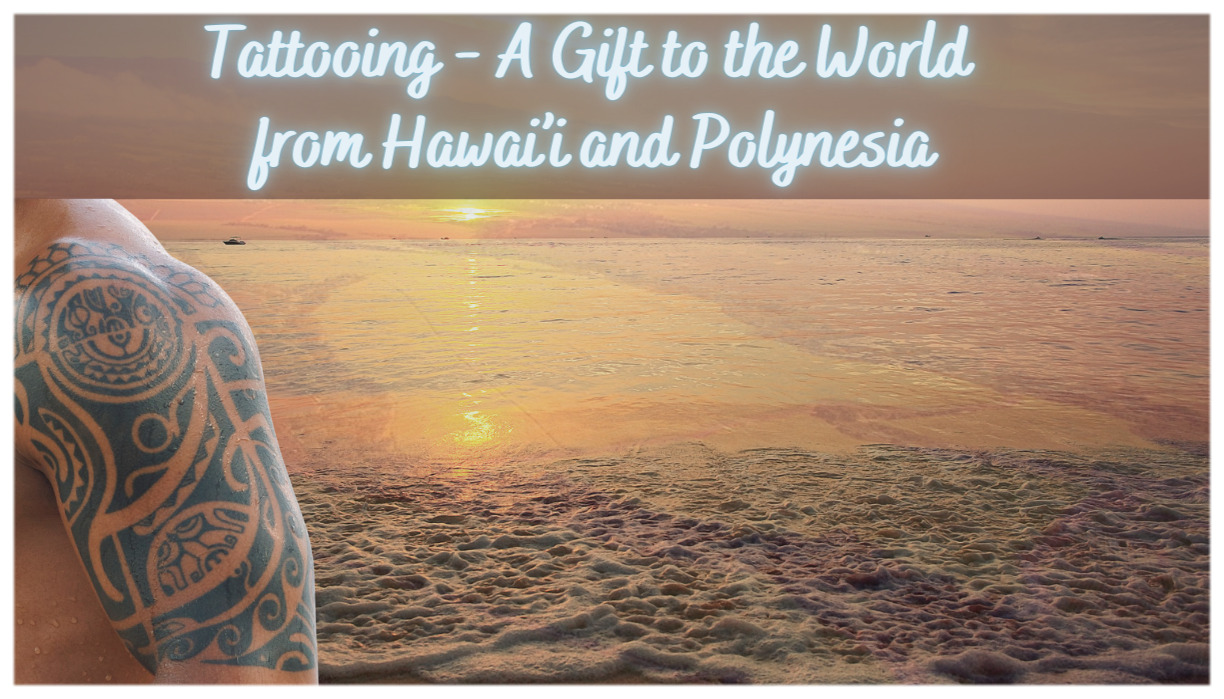 When I tell someone that the art and practice of Tattooing first originated in Polynesia and Hawai’i, people do not believe me.

However, it is true. The art form of Tattooing was utterly unknown in the western world before Captain Cook’s first voyages through Polynesia and Hawai’i.

Even the word, Tattoo, is one of a few words that originated in Polynesia and Hawai’i and is now used worldwide. It is derived from the word tātau in Tahitian and kākau in Hawaiian.

It means marking the skin with color.

Traditionally, tattoos were made from the pa’u, the ink of ground up soot from the kukui or candlenut mixed with sugar cane juice. 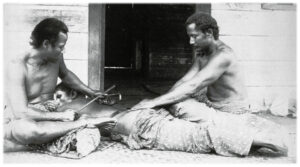 In ancient Hawai’i, tattoos were like the Coat of Arms Western families used to identify themselves.

Specific tattoo designs were known to represent certain families or groups. Others sometimes designated social status or occupations. The designs were not intended to be beautiful works of art like many are today. Instead, they were more about telling an individual’s life story or used to guard a person’s health or spiritual well-being.

Nowadays, the practice of traditional Hawaiian Tattooing illuminates a connection of people to a meaningful place and to each other. The traditional Tattoo is a profoundly symbolic representation of Hawaiian history and culture and of the individual’s own history.

It shows the pride and understanding of the ancient Polynesians’ sacred traditions once practiced by ancient Hawaiians and their ancestors.

Traditional Hawaiian tattoos in the past were applied under strict religious rules. Thus, it was a religious ceremony with the tattoo designs holding deep, multi-layered kaona, or hidden meaning and power. 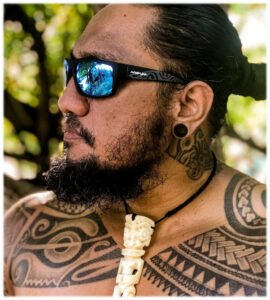 Since the Hawaiian Renaissance of the 1970s and the resulting pride in Hawaiian culture, traditional Hawaiian tattoo designs are becoming increasingly common.

In the days before Western contact, there were many tales of Hawaiian warriors having half their bodies covered from head to toe with a solid black tattoo, the kākau pa’ele. Since the ink was made from the soot of burned kukui, black was really the only color available.

According to the historian Samuel Kamakau, the solid black Tattooing, also called pahupahu, may have originated from one of the early settlers of Hawai’i. These were the people who came from the Marquesas Islands. This was before the Tahitian settlers arrived. 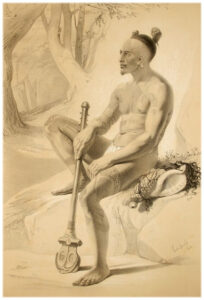 In the Marquesas Islands, the solid black kākau was used as a disguise for the warriors there. This practice was continued by their descendants, the Hawaiian warriors. It was hoped that the solid black, making them look half burnt or covered in ink, would intimidate their foes.

Since the ancient way of applying the ink was done by slicing the skin open and pouring in ink, undoubtedly, they were more intimidating to be able to endure such pain on an entire half of their bodies!

It is still possible to have a traditional Hawaiian tattoo done with the ancient kākau technique if someone wants that done.

This ancient technique was revived along with other age-old skills and art forms during the Second Hawaiian Renaissance of the 1970s.

There is a Hawai’i-based tattooist named Keone Nunes.  He uses tools and techniques just like the ancients did. His implements are made from solid wood and animal tusks. And he hand-taps his tools to tattoo the skin.

Here is what Keone Nunes says about his work:

He begins the tattoo process with an interview with each of his clients.

“To me, it’s essential for people to have the right idea of why they want to get the work done or what motivates them to have it done in this fashion.” He says,  “If they’re Hawaiian, I would like them to have their genealogy ready. Certain families have specific designs. Some clan designs were not just regulated to blood relationships but to relationships in chiefdoms and things of that nature.”

To protect the well-being of the person receiving the Tattoo, or kākau, Nunes follows a lengthy cultural protocol, he will:

Nunes also says, “Prayers are generally for the well-being of the person getting the work done.

It’s like experiencing a rebirth during the ancient Hawaiian Tattooing process. When a person is born, that whole process is dangerous for the individual and the mother. So because of that danger, those chants and prayers are to give that person strength to go through that process of rebirth and come out stronger.”

The unexpected part? Doing the kākau by hand is usually twice as fast as using the machine! For example, Nunes recounted he has completed a hip to ankle tattoo in 45 minutes. 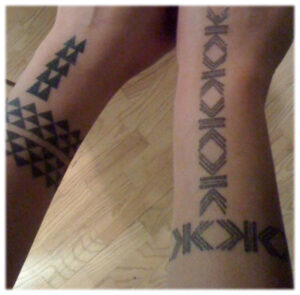 According to legend, some tattoos can protect you in the real world. Publisher Lorin Thurston, in 1923, told of seeing a woman with a row of triangular dots around her ankle. She told him it was a charm to protect her against sharks.

This story comes from a Hawaiian legend about a woman bitten by her ‘aumakua – a shark. (The ‘aumakua is a spirit creature who is supposed to protect us!). The woman cried out to the shark that he was supposed to protect her. The shark let her go and replied, I will not make that mistake again, for I will see the marks on your ankle.

So, go ahead, and get some of the traditional Hawaiian tattoo designs.

Choose any of the squares, triangles, and crescents. You can even get a tattoo of your own personal ‘aumakua.

Of course, having that row of triangular dots around your ankle can’t hurt when you swim in the ocean!