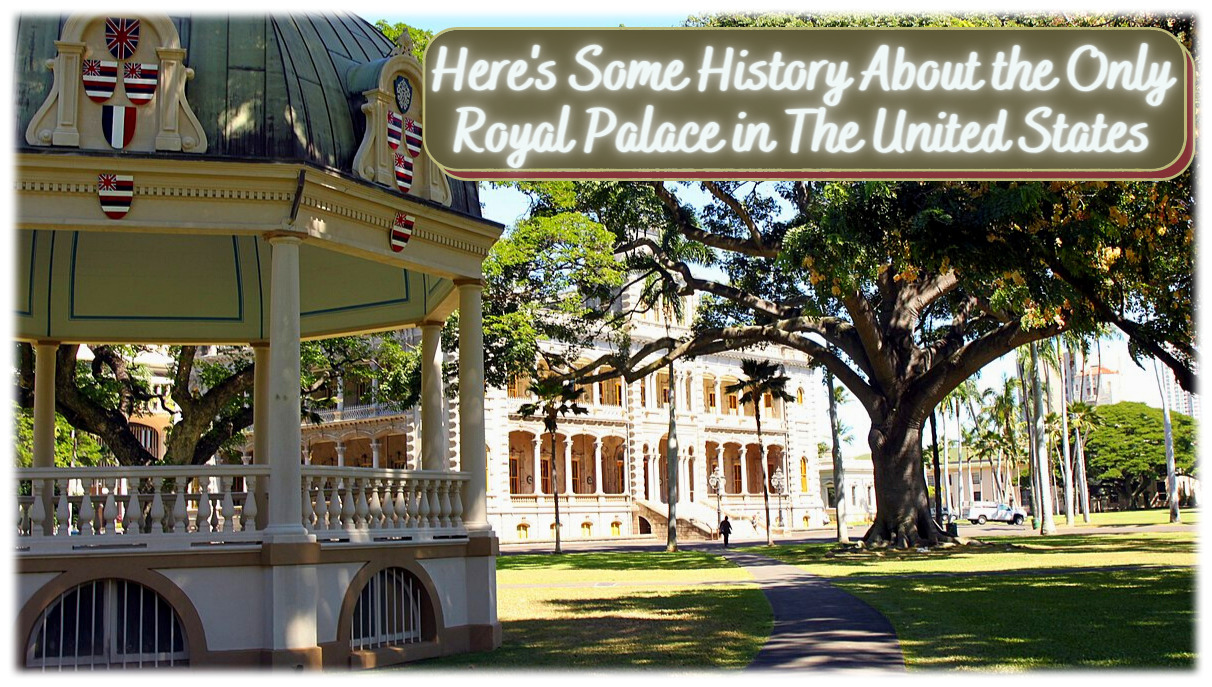 Castles and Palaces are the dreams of children.

Children’s bedtime stories are filled with Princes and Princesses, Kings and Queens. Walt Disney knew the importance of these dreams when he created the iconic Sleeping Beauty’s Castle. It is the epitome of branding success. It is recognized by people worldwide. 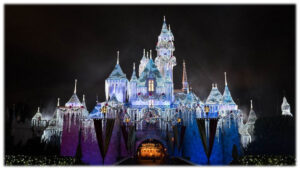 In today’s blog, we tell you about the place where real Kings and Queens walked the grounds of an authentic Royal Palace, The Iolani Palace in Honolulu, Hawai’i.

Iolani Palace is the only REAL Royal Palace on American soil that was once an official Royal Residence.

This Palace was also built on a dream similar to childhood dreams. It was made from a king’s noble vision, which the Hawaiian Monarchy had. This vision was to create a magnificent palace that would symbolize the glory, strength, and The Hawaiian Kingdom’s place among other nations in the international community of nations. In addition, it would raise the self-esteem of the Hawaiian people and show that Hawai’i was independent. 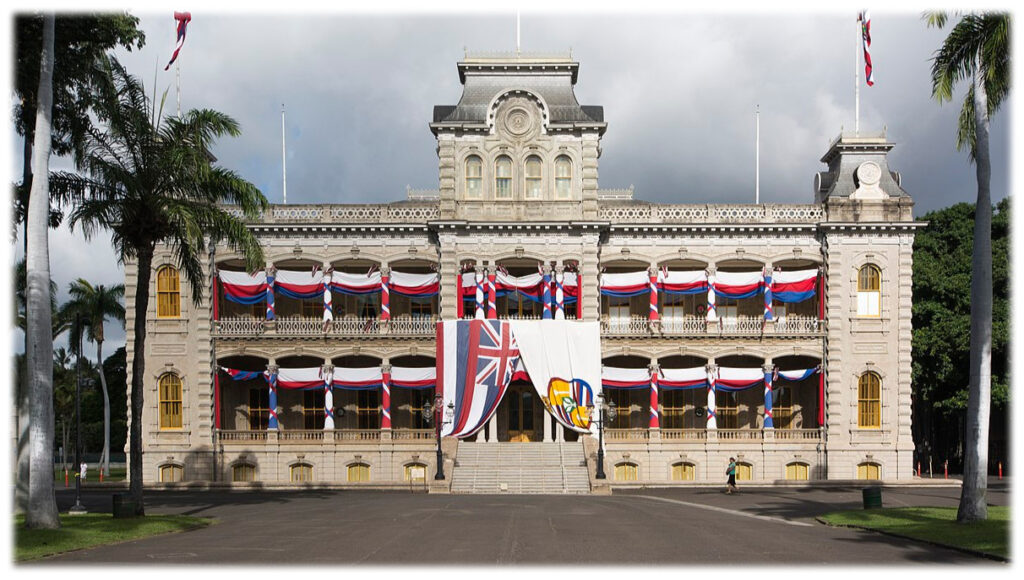 It was built when the Kingdom of Hawai’i was at a critical crossroads. The fledgling nation was emerging from decades of turbulence  at the same time it was adapting to Western influence and ideas. The challenge was creating a  hybrid; a nation of ancient Hawaiian traditions and values merged with Western ideas and technology.

The Kingdom was trying to find its footing in the Modern World.

Iolani Palace’s construction began with the placing of the cornerstone on December 31, 1879, by the penultimate King of Hawai’i, King David La’amea Kalākaua. The ceremonial placing of the stone took place with full Masonic Rites since King Kalākaua was a 33rd-degree Scottish Rite Mason and Knight Templar.

The construction was completed 3 years later, in 1882.

Starting in 1882, the Palace was the official residence of the Hawaiian monarchs. King Kalākaua, and his wife, Queen Kapi’olani, walked the halls and ruled the Hawaiian Kingdom from inside Hawaii’s lavish Royal Palace. They were joined often by his sister, Queen Lili’uokalani, who led in Kalākaua’s place during his travels and would succeed him to the throne.

They entertained often and lavishly. 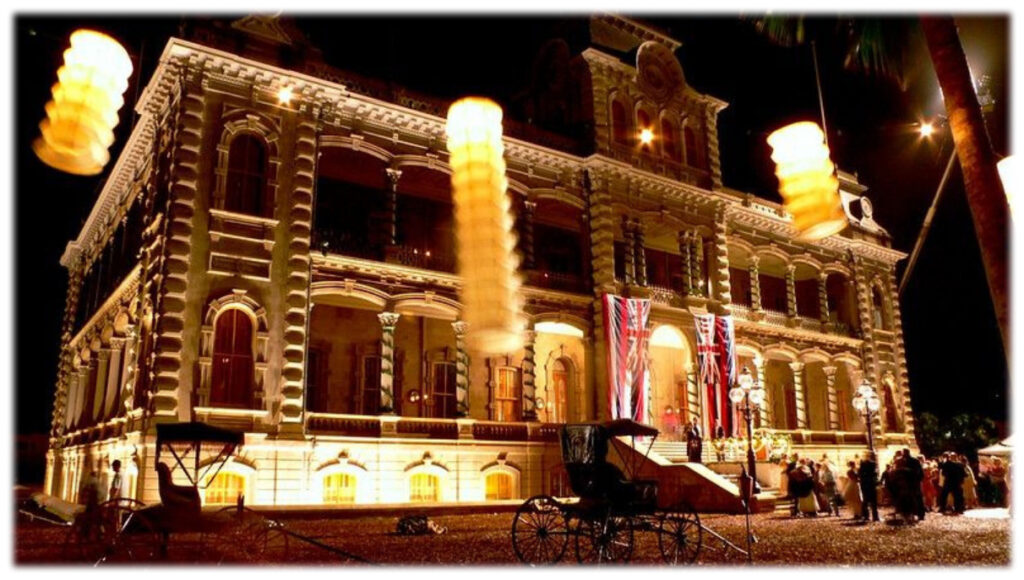 The Monarchs received dignitaries and luminaries from around the world and held official functions in grand style in the new building. The Palace echoes to this day of the beautiful memories of grand balls and hula performances held for the esteemed guests of the new nation.

The location for the Palace was chosen with great care.

The land the Palace was built upon was a significant place. It is believed to have been a heiau (place of worship) since ancient times.

Hawaiian people give great reverence to ancestral connection and mana. The Hawaiians believe mana is spiritual energy and healing power and can exist in places, objects, and persons. And, the choice for the new Palace involved the mana of the location.

They believed mana could be inherited through lineage or acquired through incredible feats, skill, artistry, talents, and gifts, cultivated through education and training. Therefore, the site of the future Palace was considered perfect. It reflected the mana from the ancient heiau that once stood there. Plus, it contained the mana from five Hawaiian Kings who had lived on this same land previously.

These five kings had established their official residence at the Palace site in a spacious home built in 1845 for King Kamehameha III. But, like the heiau before it, the royal residence was demolished in 1874. 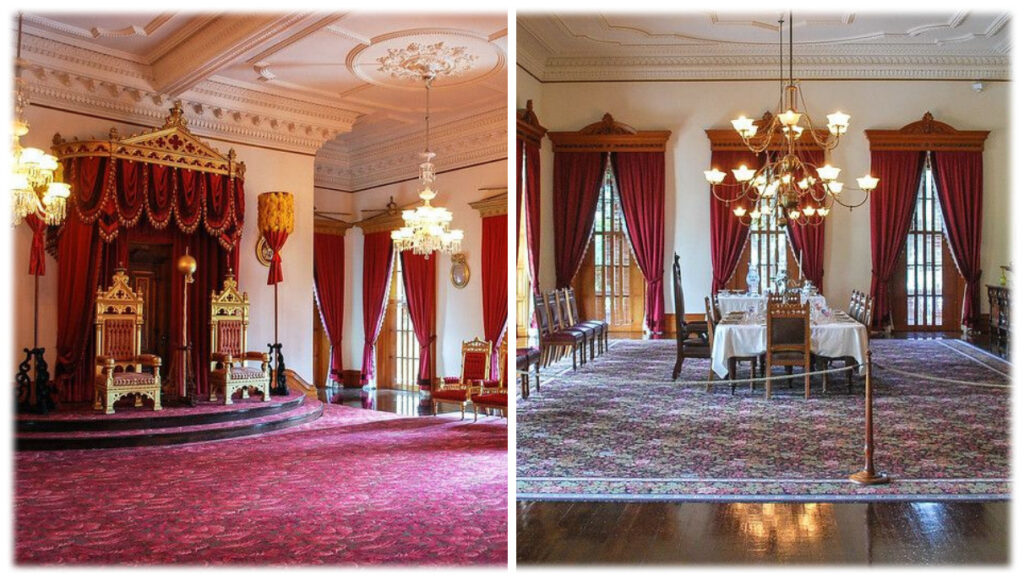 A grand Palace to reflect the grandeur of the Hawaiian Kingdom.

Iolani Palace was ahead of its time. It was equipped with the most up-to-date technology and amenities. Although it was first built with gaslighting, by 1882, it was outfitted with electric lights. This installation was completed before The White House, or Buckingham Palace, had electricity!

The interior of the Palace was finished with fine, gorgeous, Hawaiian woods. Woods with lots of vibrant character such as Kamani, Koa, Kou, and O’hia, along with American walnut and Oregon white cedar. 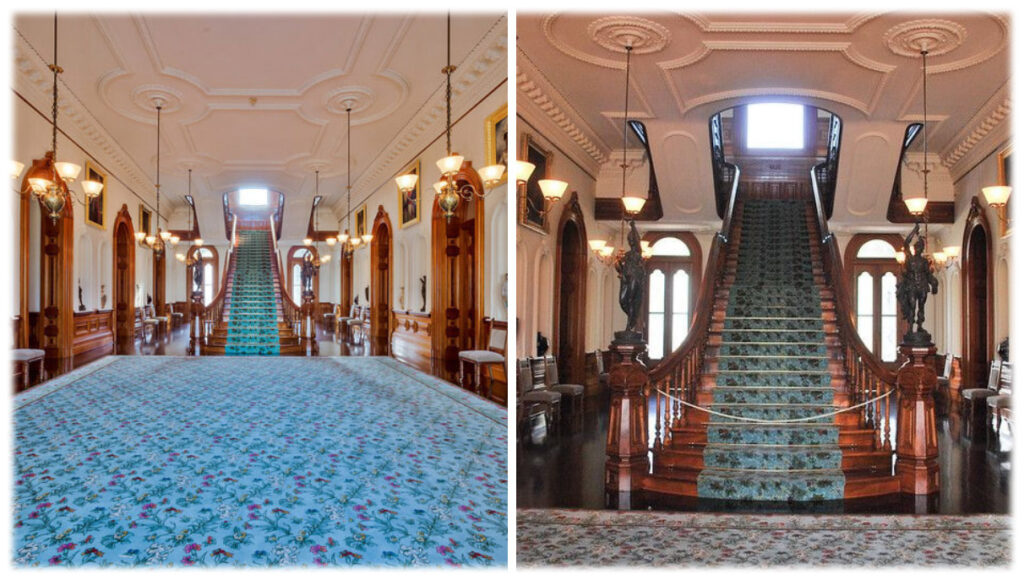 The Grand Hall is the entire width of the Palace, and the focal point is a large staircase made of Hawaiian Koa wood. This staircase leads to the private family suites on the second floor. Along both walls of the Grand Hall are ten portraits of Hawaiian kings and queens. They are hung in niches decorated with valuable pieces from England, India, Japan, and France that were gifted to the King and Queen.

Initially, an eight-foot-high coral block wall with wooden gates enclosed the Palace area. Then, in 1892, the new wrought iron fence was installed. 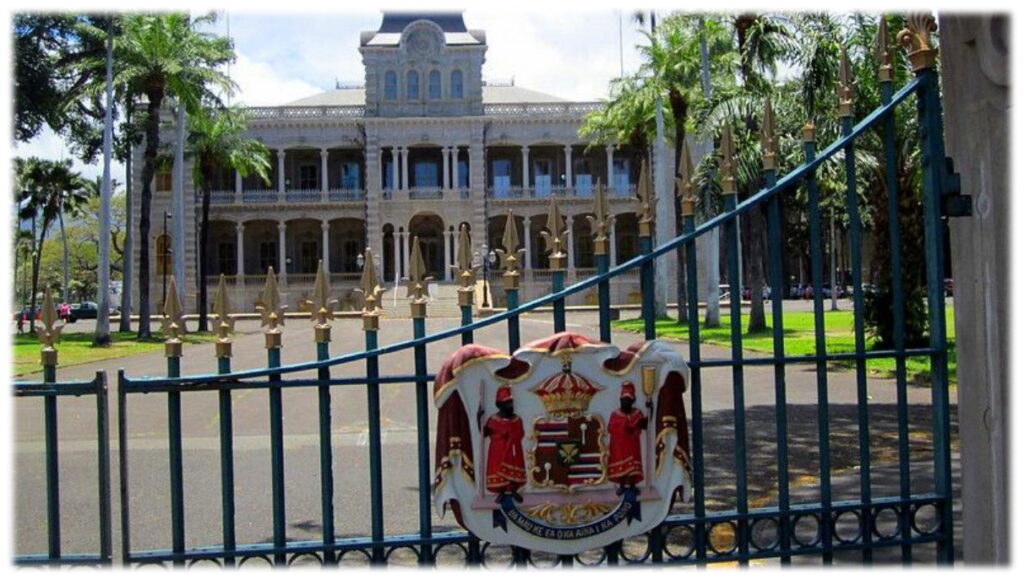 The Palace grounds have four principal gates that display the Coat of Arms of the Hawaiian Kingdom. Each gate has a unique name and purpose:

In 1893, eleven years after the Palace was completed, the Hawaiian Monarchy was overthrown.

This was just 2 years after the death of King Kalākaua. Once a Royal Palace, the building was taken over by the new territorial government. It became the government headquarters for the Provisional Government and, eventually, for the State of Hawai’i.

The grounds were paved, and the rooms were divided to create offices. Thousands of treasures – furniture and artifacts – were auctioned off or given away. Personal belongings were returned to the royal families. 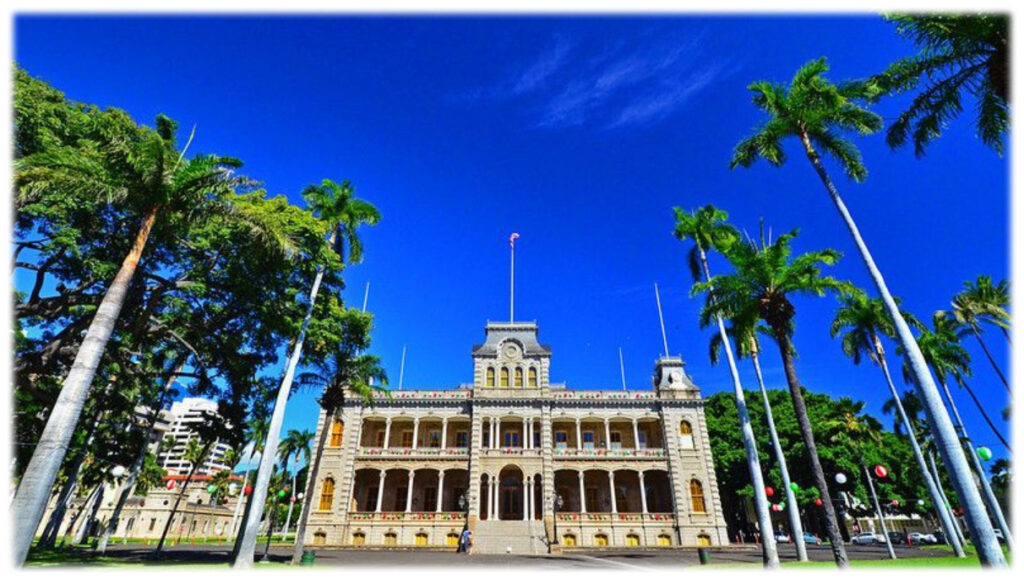 In 1960, the government offices moved to the new State Capitol Building across the street. Then, finally, the mistreated, yet still divine, Iolani Palace was ready to be restored.

Reproduction of original finishes and fabrics were created to restore the Palace rooms back to the glory of the monarchy era. Insect-eaten wood on the beautiful koa banisters were replaced, and the search for missing artifacts began.

Over 5000 pieces have been recovered from different parts of the world. For example, a table was found in the Governor’s mansion in Iowa, and in Australia, glassware was located. Even a chair was found in a local thrift store.

Two original Royal paintings that hung in the Grand Hall were found in Ireland.

Although 5000 pieces have been recovered, the quest to find original Palace furnishings and artifacts will continue until Iolani Palace is restored fully to its former grandeur.

This story has a fairy tale, partially happy, ending. The Friends of Iolani Palace who oversee this restoration project say:

“Every time (an object) comes home to Iolani Palace, it’s a way of healing some of what happened in the past” (referring to the overthrow of the monarchy).

If you find yourself in Honolulu, even for a day, the tour of Iolani Palace will be something you will never forget. To walk up the grand staircase as Kings, Queens, Princes, and Princesses once did, is to return to our childhood dreams.

Only this time, they have come to life.