Hōkūleʻa – Taking Care of the Earth 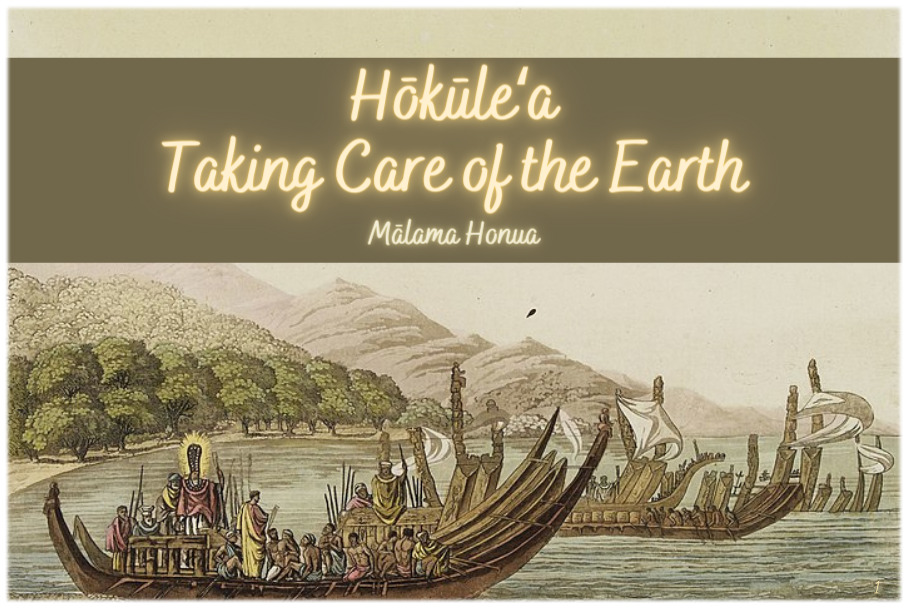 The Hōkūleʻa Epic Voyage –  Mālama Honua: To Care For Our Earth

The idea for this epic voyage began with a very unusual phone call. Nainoa Thompson, aboard  Hōkūleʻa, spoke via satellite phone to Lacy Veach who was aboard the Space Shuttle Columbia.

Nainoa, aboard Hōkūleʻa, was sailing from Rarotonga to Honolulu and Lacy was orbiting the earth in the 1992 Colombia mission. Both Hawaiian, they shared a strong bond.

In the moment of that conversation, both men could see the world from an immense vantage point.  Both saw how the planet and everything on it needed help. Veach could see Island Earth dwarfed by the vastness of space while Thompson could see the Earth from her oceans’ vast spaces. 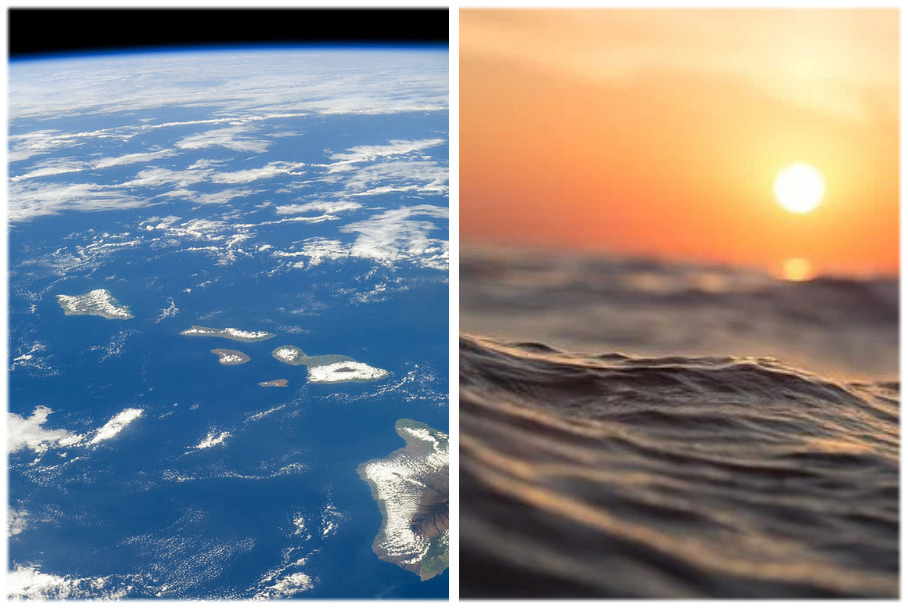 Both saw extensive swaths of environmental damage and destruction. They both recognized the collision course Earth was on with her current unsustainable lifestyle.

An idea was born.

They spoke of sailing around the world to share the Hawaiian values and practices of sustainability, the methods that have enabled the Hawaiians to be excellent stewards of the land and sea.

For many centuries Hawaiians had refined a model of sustainability even before arriving and settling these islands.

Original Polynesian practices and, later on, Hawaiian practices, had allowed for a long term vibrant, healthy environment. The Hawaiian philosophy was to always plan for 100 generations into the future.

What would the future generations need? What can we do to provide that?

The phone call from double-hulled canoe to Space Shuttle started the ball rolling. The idea was to create a voyage to help educate people on Hawaiian and Polynesian environmental ideals. It was a massive project.  The goal was to share these ideals on the Mālama Honua voyage to help restore the planet’s health. This would require much developing, planning, and refining concepts. 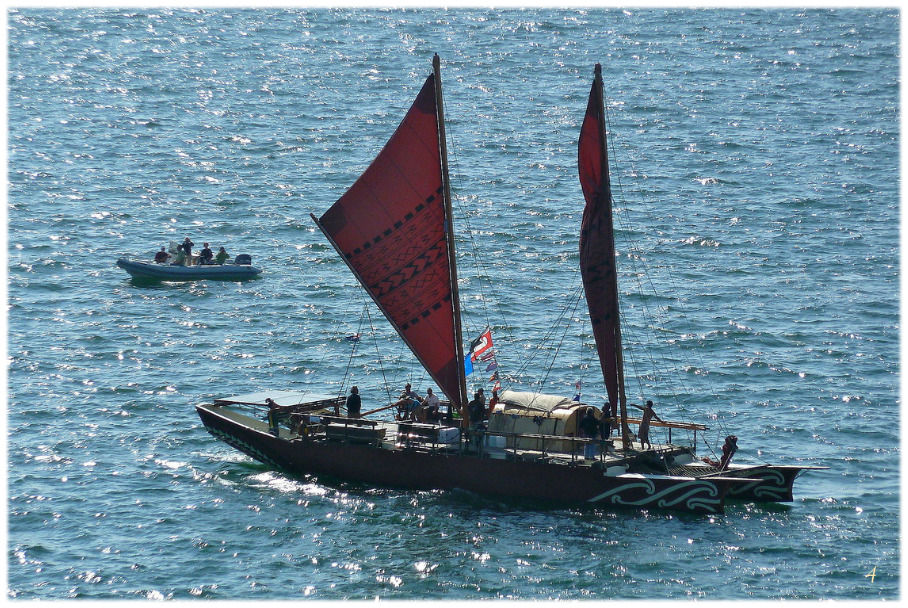 In their preparation, they would need to consider the best places to visit and connect with other cultures to spread this mana’o (knowledge).

From that moment onward, the planning process went into full action. After years of planning, Mālama Honua would eventually last 3 years, and cover 47,000 nautical miles.

There were many facets to bringing this ambitious goal to fruition:

There were literally thousands of details to plan and put into place.

In 2007, on the voyage to Micronesia and Japan, the crew realized how successful Hōkūle‘a was in bridging cultural boundaries.  They continuously met people who were inspired and filled with hope from Hōkūleʻa. This experience reinvigorated the planning and implementation process of the Mālama Honua.

They were witnessing the dream of Mālama Honua coming true with their own eyes.

Between that momentous phone call from the ocean into space and the launching of the Mālama Honua in 2014, another ship began to take shape in Aotearoa!

This ship would become Hōkūleʻa’s Sister –  named after her sister star. 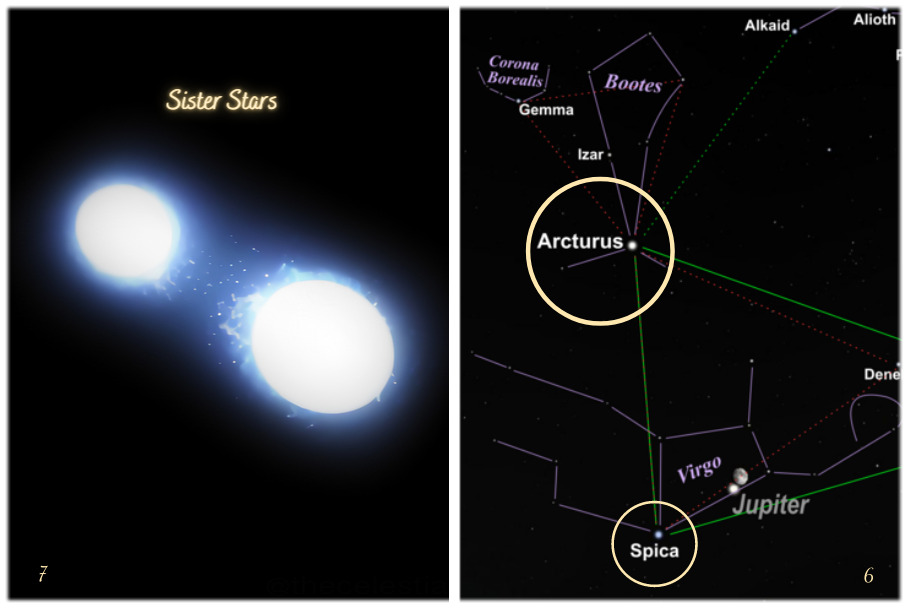 Hōkūleʻa is Arcturus and Hikianalia is Spica

Hōkūleʻa and her sister star, Hikianalia

Both break the horizon at the same moment over Hawai’i

Hikianalia was a traditional double-hulled Polynesian ocean-going ship. Built specifically for the Mālama Honua voyage, her crew would consist of many different Pacific Islanders.

It would be two years before she would meet her sister, Hōkūleʻa. Like the two namesake stars rising in tandem from deep space, Hikianalia was destined to be the Companion and Escort Vessel of Hōkūle‘a!

At her birth ceremony and blessing, when she first touched the sea, Hikianalia’s captain, Bruce Blankenfeld spoke eloquently:

“The Maori spoke to the ancestors of the land. The Maori youth sang beautifully of Hawaiʻi, pouring out their hearts, with hands quivering like the wind blowing through the silver fern. This is to honor the ancestors.”

Kaniela Akaka closed the ceremony by blessing Hikianalia and said:

“She is a bridge between Hawaiian and Maori cousins.”

For all Polynesians and those who love Polynesian Cultures, this was a momentous occasion.

The beginning of a new era.

The explorers and settlers who had left Polynesia’s southern islands hundreds of years before, had reunited with their long-separated cousins!

Hikianalia is now used as a floating classroom blending ancient wisdom with modern solutions. She specializes in the scientific exploration of marine resources and in the training of the next generations of voyagers.

Young marine scientists in the making are part of the crew and spend much of their time onboard conducting research. Many are still teenagers as that is Hōkūleʻa’s focus – the youth from the next generation. 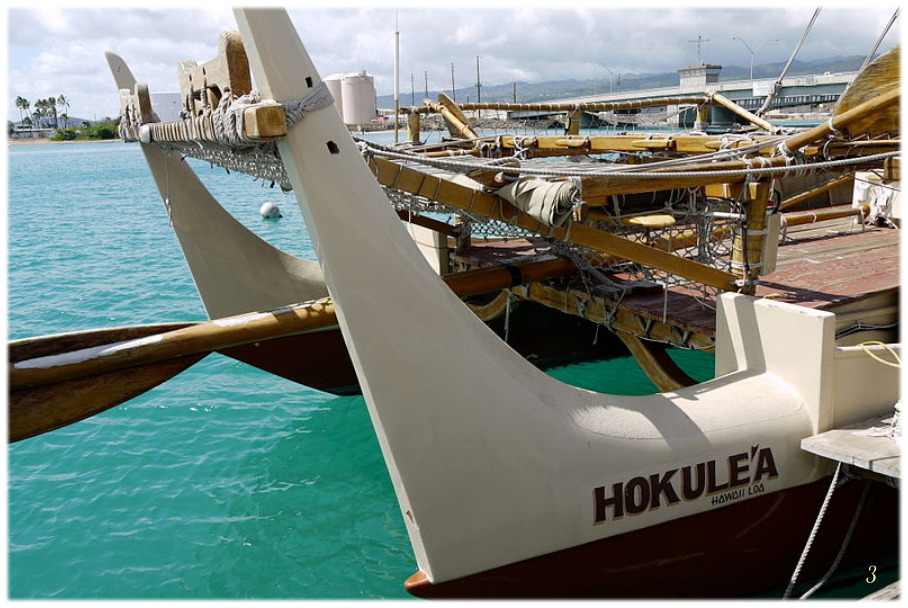 A few of the things they study:

They literally gather information to preserve life in the oceans and on land for the next 100 generations!

Above that, values and behavior of sustainable coexistence are practiced on the deck of the double-hulled canoe. Fellow crew members’ ways of relating are shared as models for how we can live sustainably on islands or anywhere in the world.

Nā Waiwai Aloha are Hawaiian Values.  You can read more about them: HERE

Hikianalia brings the ancient ways into the future.

Hikianalia combines the latest ecological technology side by side with the heritage of the ancient voyaging tradition. There is a 100% ZERO carbon footprint.  Each of her hulls contains an electric motor powered by onboard photovoltaic panels. These panels convert sunlight to electric propulsive energy.

Her design fully supports the Mālama Honua mission of sustainability while harnessing technology to support this cause.

The Mālama Honua voyage began with a Hawaiian navigator in the South Pacific speaking to a Hawaiian crew member of the Columbia Space Shuttle in 1992, while she orbited the earth.

They talked about a sea voyage to bring the message of Hawaiian values of sustainability to people world-wide.

22 years later, they set off in May of 2014 from Hawai’i, with the escort Sister ship, Hikianalia, and circumnavigated the planet to 85 ports. 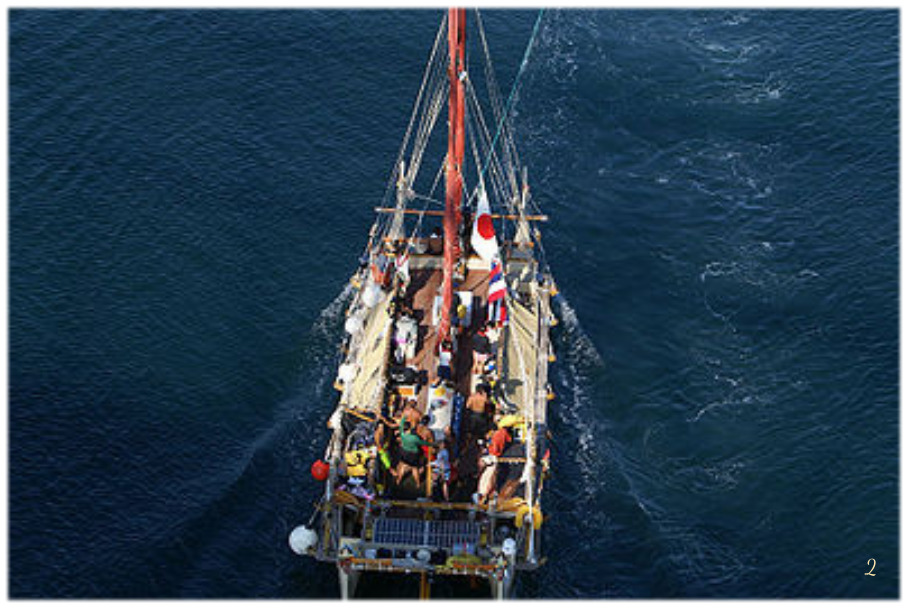 They focused on teaching and inspiring the youth.  Classes were designed to teach the spreading of Hawaiian philosophy.  This is summed up in this one phrase:

The sound of a Golden Rule.

It has worked for large populations of Hawaiians for centuries. Perhaps it’s time to listen.

PS – Hōkūleʻa and Hikianalia have plans for a voyage to start in 2022, so stay tuned.