How Hawaii’s Anthurium Became Its Most Popular Bouquet Flower! 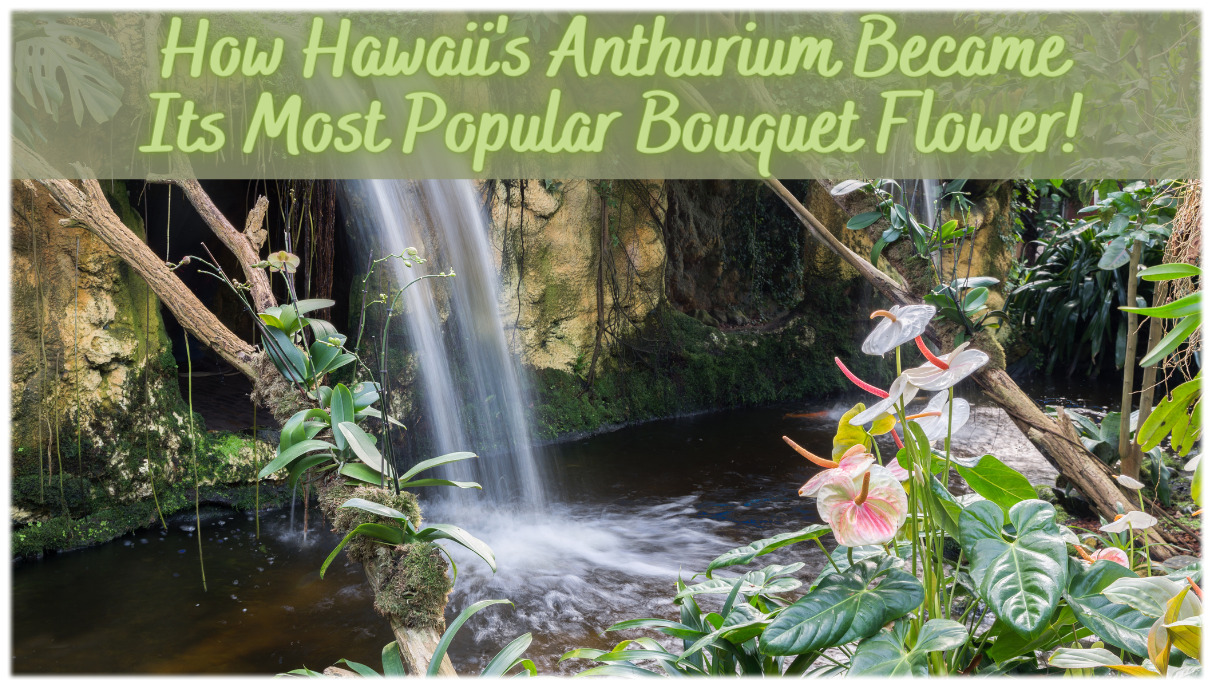 From this day since they were first introduced people ask if they are real. 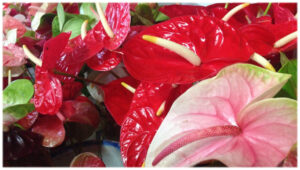 These stunning flowers were brought to Hawai’i from London in 1889 by Samuel Damon. Their cultivation and propagation went well until the 1970s when a fungal disease first appeared. This pest spread so fast it was able to destroy 50% to 100% of many of the anthurium farms.

So, like many exotic plants grown commercially in Hawai’i, a system for preventing this scourge was developed.

Sanitation and prevention protocols were developed.  The anthurium had to be treated carefully to not spread this deadly disease and devastate farms across the islands. They had to be grown in separate pots so that any threat of disease could be removed quickly and not spread. 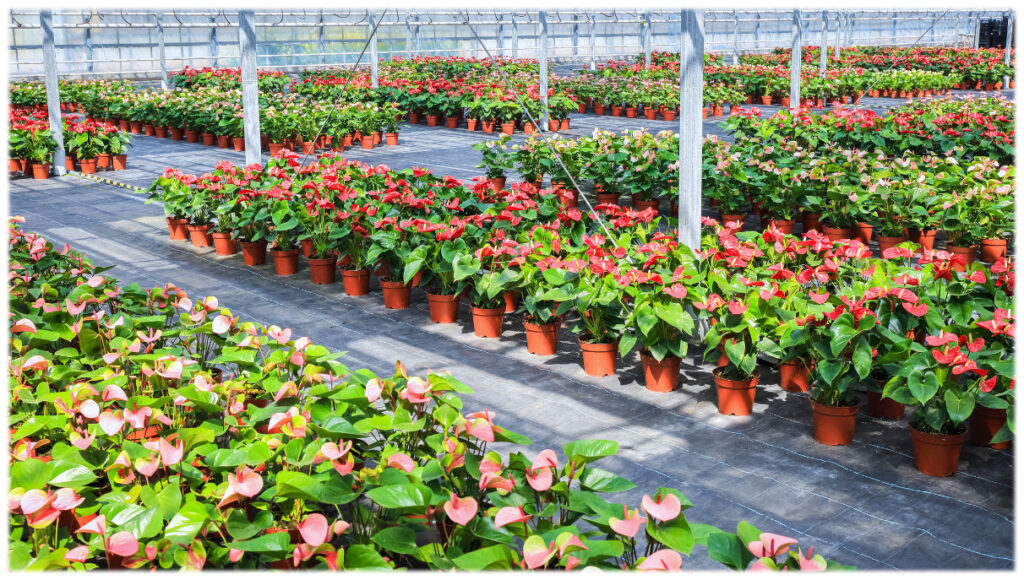 Many of the rare and uncommon introduced flora of Hawai’i, like anthuriums, are native to the hot, steamy jungles of Central and South America.

These plants were no doubt very different plants before all the hybridization of modern times. They grew with little notice for hundreds of centuries before the ever inquisitive Western explorers found them and brought them back to their native countries.

One day in 1876, one of these inquisitive explorers spotted this beautiful and unusual flower on a plant expedition to Colombia. His name was Edouard Andre and he quickly sent this beautiful plant with the exquisite flower to Europe.

After a stop in Belgium, the anthurium landed at Kew Royal Botanical Gardens in London, England.

And then, Samuel Damon brought the anthurium to Hawai’i from England.

He planted this unusual plant with an extraordinary flower on his large estate in Moanalua on O’ahu.

From Moanalua, the plants were slowly distributed to other growers.

When Hawai’i became the 50th state in 1959, there were nearly 365 farms cultivating anthuriums statewide.

They continued to grow in popularity. By 1970, there was a worldwide demand for the anthurium. Across the Hawaiian Islands, growers increased the size of their farms.

The cut flower production peaked in 1980 with over 2.5 million dozen stems.

This was still not enough to meet demand.

Today, the multifaceted anthurium, with her many different varieties, has become the most important cut flower in the Hawaiian floriculture industry.

It is hard to imagine that one little red flower could create a whole industry.

Let’s look at how the different anthuriums came to be:

The year was 1936. It was a breakthrough year for Hawaii’s anthurium flower industry. Until that time, they were only cultivated by backyard, hobby gardeners. A small amount of flower sales was beginning to happen, but only locally, within Hawai’i. 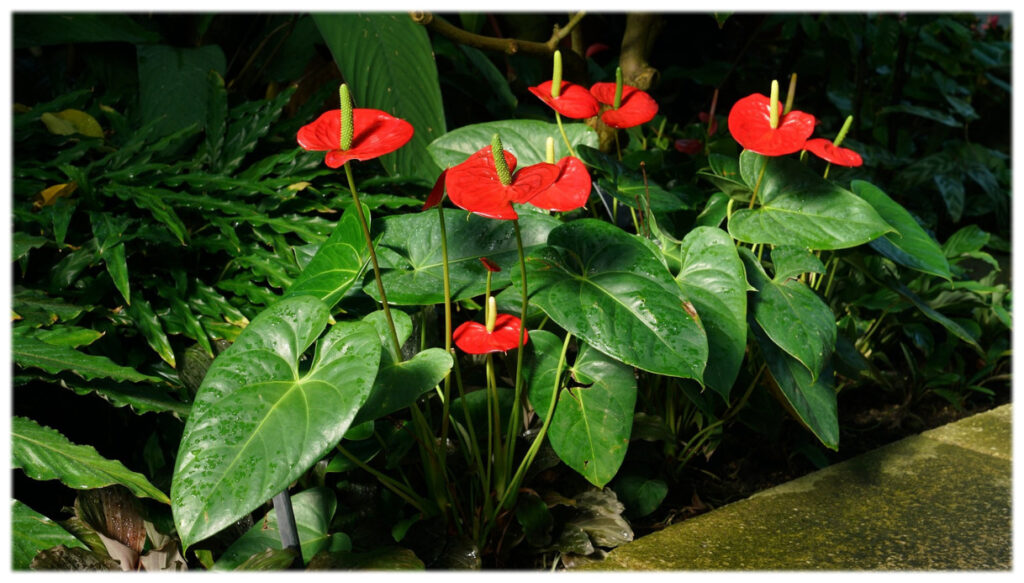 That year, a red anthurium was developed in a garden in Hilo on the Big Island.  This flower became known as the Ozaki. The Ozaki went on to become one of the best selling varieties of anthurium from Hawai’i.

The red Ozaki anthurium bouquets have stayed popular for many years, even after other colors emerged.

Ten years later, in 1946, a beautiful orange anthurium was discovered. Some say that it has a striking resemblance and color to the original anthurium that was discovered by Edouard Andre in South America. 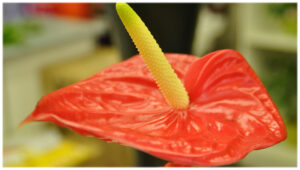 By 1950, the University of Hawai’i launched an anthurium research program. This program made a significant impact on the expansion of the anthurium industry across the state.

The rest is anthurium history.

As each new flower was developed and revealed, they were named, and sometimes patented.

Let’s take a look at some of these lovely flowers – their names, and a bit of their history.

Ozaki, as we mentioned above, is the red anthurium. The one that skyrocketed to popularity in 1936.  For many years, the Ozaki was the best selling variety from Hawai’i. It was also the flower that almost single-handedly created Hawaii’s Anthurium Flower Industry.

The Nitta, a beautiful orange anthurium seen above, was discovered in 1946. It came from the garden of Asako Nitta on the Big Island. 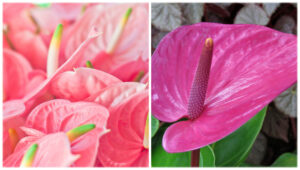 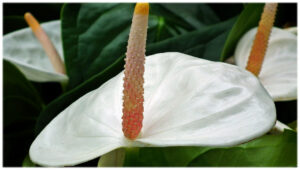 The University of Hawai’i released the Mauna Kea anthurium in 1977. It has a large white and green flower and is the first of many obake anthurium varieties. 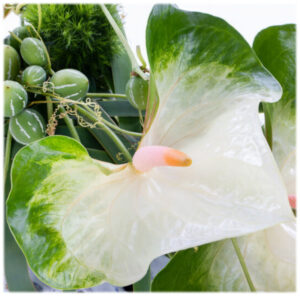 The obake are large, variegated flowers with a wavy surface. This gives them a different appearance and an otherworldly or ghostly feel.

Hence the name, Obake, which can also mean Ghost in Japanese. They look much differently than the more common solid red, green and pink anthuriums.

The first patented anthurium, the red speckled Starlight, was released in 1988. Developed by Calvin Hayashi, it produces red flowers that are mottled with white specks. 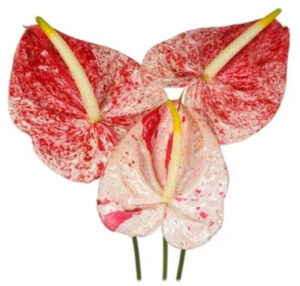 At the same time a dazzling green anthurium was released by Hayashi called the Midori. 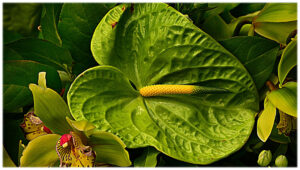 Kalapana Anthurium was named after the Big Island’s awe-inspiring black sand beach that was lost to a lava flow from the Kilauea Volcano.

The Kalapana Anthurium is just as awe-inspiring as the once awesome black sand beach. This Red and green obake was patented in 1993.

Next time you are standing in front of live, multicolored anthuriums, you will know the phenomenal journey this delightful flower has taken to arrive before you. 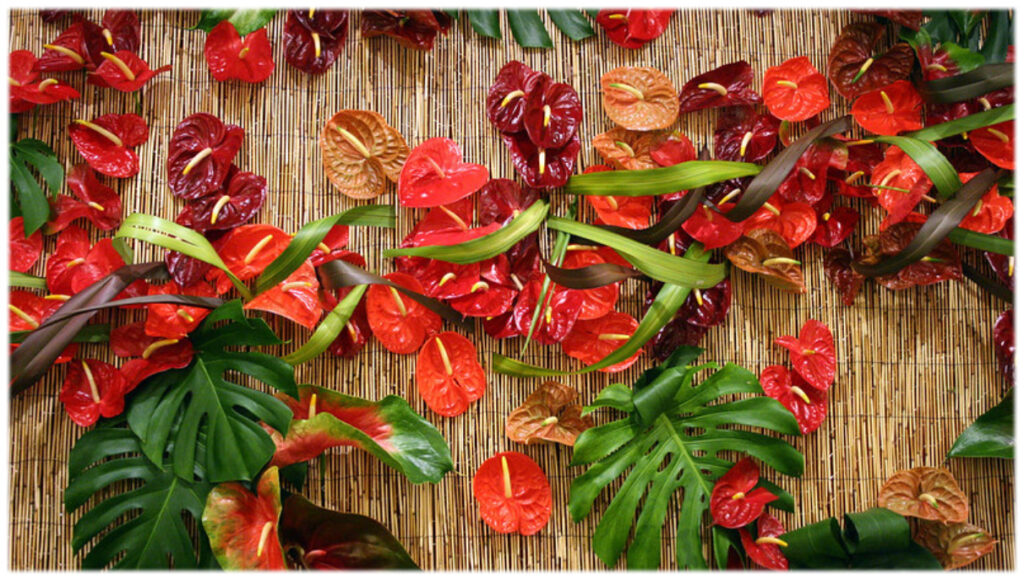 A journey that lasted over 145 years…

…from Colombia, South America to London, England and then, all the way around the world to Hawai’i!

At last it landed in Hawai’i, where it was nurtured and coddled to develop its multicolored variety which pleases all of us today!

Perhaps knowing this story will give this amazing flower a place of prominence and aloha on your table.