We, humans, love our moon.

Our single satellite, circling our lives, changing our tides, even loosening our inhibitions and making us a little “loony!”

We write poems and songs about it, stare at it, and propose under it. We even think about that special someone that may be far away and know that they, too, are looking at the same heavenly object.

Yes, we all love our Moon. We look at the Moon, much like the ancient Hawaiians did centuries ago. With equal fascination, we have a comparable sense of awe, and the unique comfort that we find in her constant presence in our life.

Of course, the ancient Hawaiians had much more time (and darkness) to contemplate the Moon. They could observe the simultaneous ebbs and flows of the entire island ecosystem to her changing phases.

No doubt, they carried eons of cultural knowledge already with them about the Moon’s phases, when they originally traveled north to Hawai’i.

How Do We, the Non-Island Folk, See the Moon?

The Moon rises in the east and sets in the west. Sometimes we look for her and, romanticism aside, sometimes we take her for granted.

Way back, we all learned about the moon in school. It waxes and wanes. The Moon is crescent, then full.  And all the other phases of the moon intrigue us, including gibbous.

What? The Moon is gibbous?  The definition of gibbous means crooked, unbalanced, unsymmetrical, things like that. Who dares describe our Moon thus? And why such confusion over the Full Moon?

People are always asking, When is the Full Moon?

NOT the Hawaiians! You can be sure that they knew precisely when the Full Moon was. Well, sort of…. Read on and learn about their unique way of acknowledging a Full Moon. 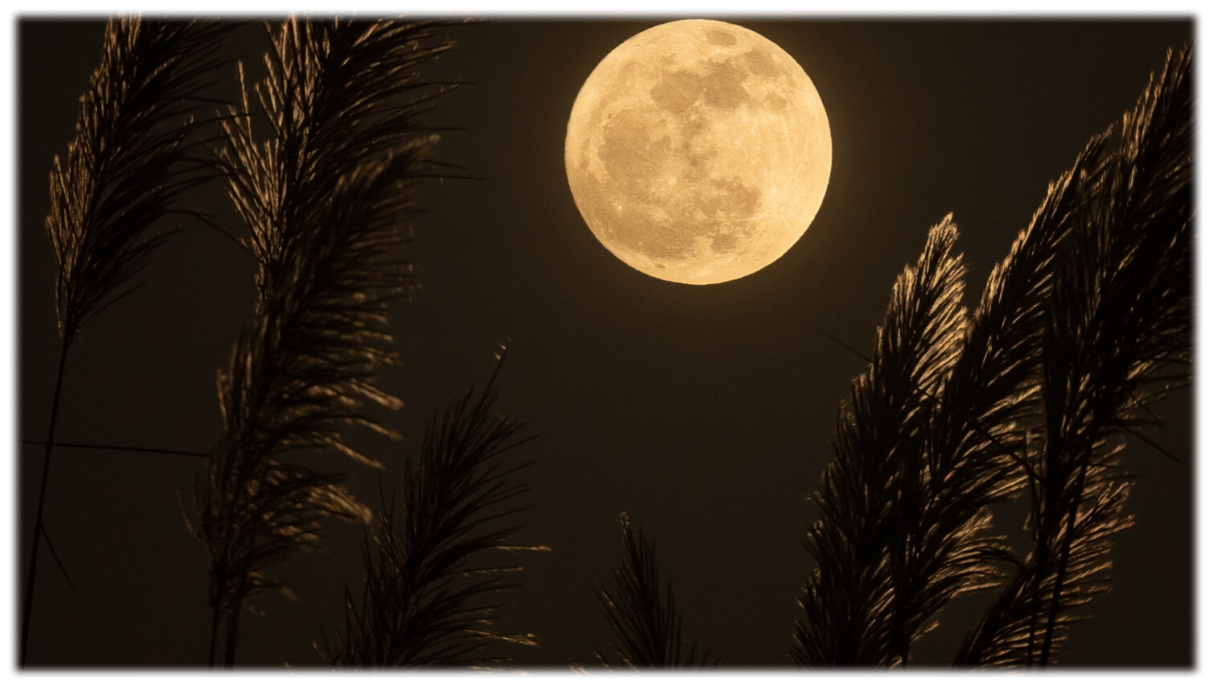 Some History of the Hawaiian Moon Calendar

The Hawaiian word for Moon is Mahina*. It is derived from the name of the Goddess of the Moon. She presides over all other Goddesses. Yes, she is a big deal! To understand the Hawaiian Moon phases and the calendar created by Hawaiians many years ago, we must begin with the Goddess Hina ̒aikamalama*.

Hina is THE strong female force in Hawaiian creation and mythology.

This is indicative of how Hawaiians respected, supported, and revered women, and feminine energy. She is also one of the oldest goddesses in Hawai’i. Hina represents strength and standing up for what you believe. Her partner is Kū*, the God of Strength, War, and Healing. Quite a pair! Women and men, gods and goddesses, held equally important roles.

The Moon is where Hina resides. Hawaiians have prayed, whispered, and admired her in the Moon, night after night since their memory began.

Do you remember the old saying “As Above, So Below”?

That old saying takes on another meaning when we see the phases of the Moon calendar created by these intuitive and acutely aware islanders.  The Hawaiians understood and moved with the Moon and it proved to them that everything is connected. They followed the Moon phases to plant certain crops and to fish in particular ways or at particular times, to prevent overfishing.

They thrived as island people under the guidance of the Moon’s harmony with the rest of nature and existence. As the Moon waxed, it was derived that certain activities would flourish, and as the Moon waned, it was time for restraint, for rest.  It was the Moon’s guidelines and seasons that they became attuned to. 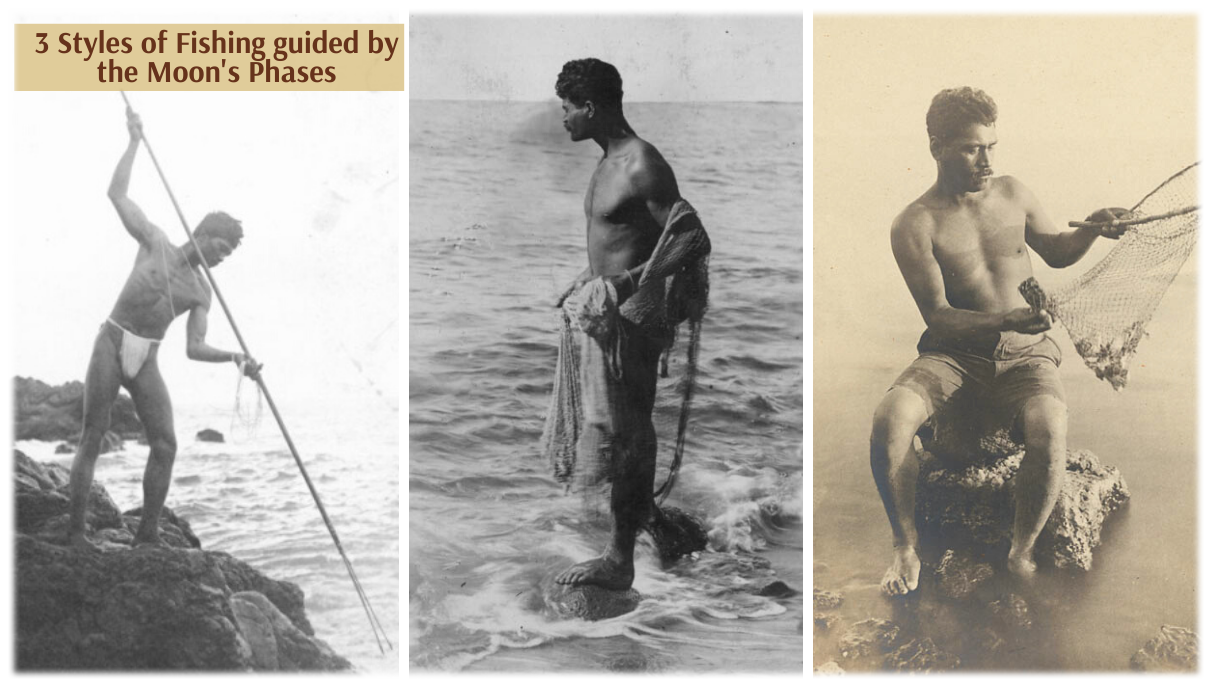 There are 29.5 Moon phases in the Hawaiian Moon calendar. Moving through each of these phases contributed to their lives in a myriad of ways. Their survival linked them to the earth, the sky, and the sea.

They studied the natural rhythms of life, and they structured their lives and the moon calendar to be in harmony with the natural world around them.

Their calendar provided guidelines. It clearly designated the timing of most of their essential activities like planting, fishing, hunting, and life in general, based on the rotation of the Moon around the earth.  Not the earth around the sun.

The Hawaiians were remarkable navigators.  Perhaps some of the best in the world. They had a deep understanding of the ocean, and its currents, and a similar knowledge of the stars and the movement of the Moon, which enabled them to find their way through the vast spaces of the Pacific Ocean without any western instruments.

A-poe-kahiko* (people of old Hawai’i) tracked the Moon through the seasons, months, and days. They would follow the rising and setting of the sun and the traveling of the stars across the heavens.

Each phase of the Moon has a Hawaiian name and some of the things they are associated with are:

Some Phases of the Hawaiian Moon and What They Mean

As we mentioned previously, the Hawaiian Moon calendar has 29.5 phases. These moon phases still continue to guide fishermen to this day. 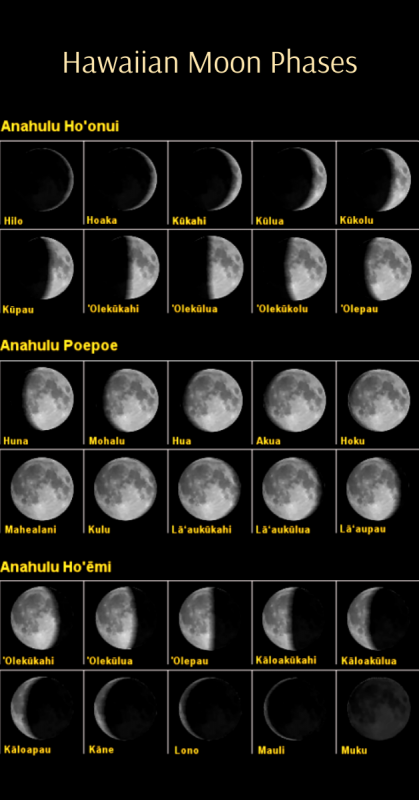 Let’s look at a few examples of these phases of the Moon.  We can see how they support and enhance the Hawaiian people as people of the land and the sea.

It starts with the first Moon or as we call it today, the New Moon. This first Moon is called Hilo*. It’s a time to braid new things into our lives. The darkness builds the anticipation of the moonlight that is on its way. This night Hilo often had men and women spending the night at the seashore, hand-fishing or fishing with their homemade nets, as the tides were low in the evening and the calm nights had little wind to disturb the fish.

During Ho’aka, the second Moon, preparation was made for the 4 Kū Moons* coming next.  It was a time of rising energy. A time to plan and organize for securing the materials necessary for the vital needs of all the people and villages.

During the 4 Kū Moons, fishing and planting were a priority. Staple crops were planted. Fishing was known to be at its best during this time before the rough tides which, would surely come with the next 4 ‘Ole Moons*.

The 4 ‘Ole Moons were a time of reflection.  The 4 FULL Moons will be here soon and that will be a time of extreme energy, performance and action. The time leading up to the 4 Full Moons, was taken to return to self and build inner resources.

We all have our Full Moon experiences. Scary stories. Waking up in the night to see the moon setting over the water, or the most romantic night ever!  How do we know when the full Moon is? Usually, we guess, OR we ask Siri or Alexa!

The Hawaiians did not need to ask anyone. For them, there were 4 FULL Moons.  Great news for us! 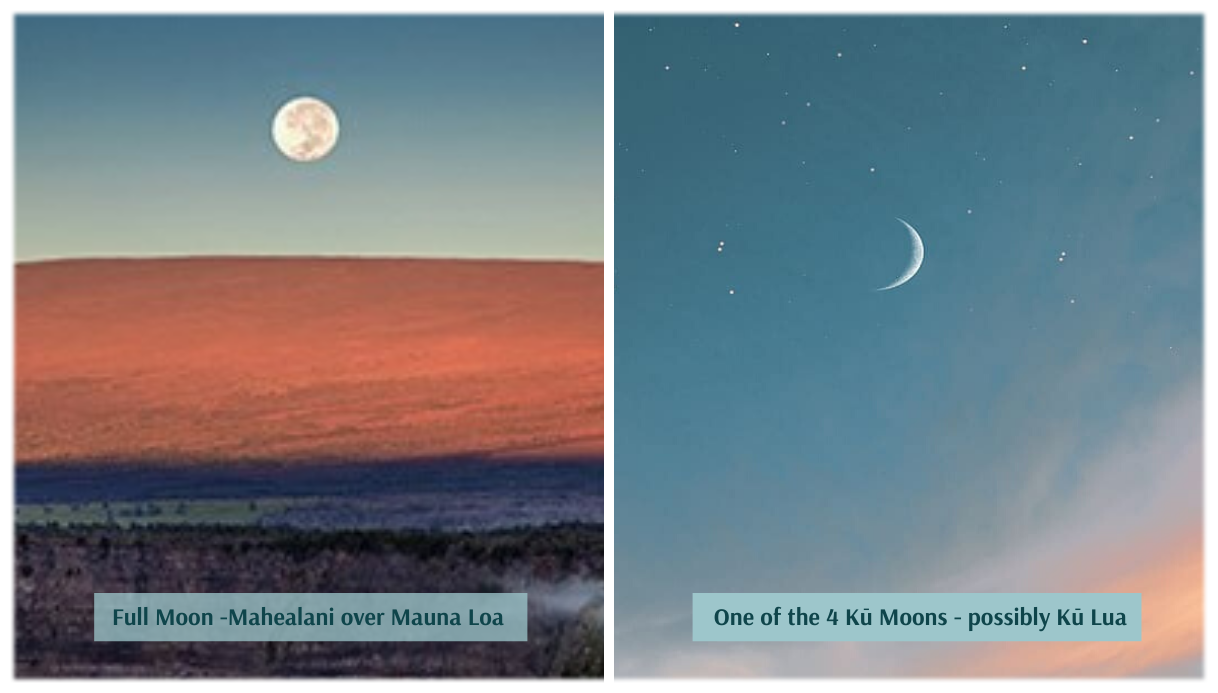 After the Full Moon

The moon cycles were a way of life.  It prepared and readied the people for the next Hawaiian moon cycle.

Of course, it is too much to go through 29.5 Moon cycles, but we know this:

The last day is Muku*.  It means to cut. We can now stop or cut anything from our life that isn’t serving us well.

Today it could be eating too many desserts or releasing a negative experience.

It was not so different back in the days of early island life.  There were many things recorded that showed us just how important it was for these early Hawaiians to have health, happiness, and harmony in their lives and in the lives of their families and villagers. Muku, the last day of the Moon, the day before Hilo meant that they could start fresh.

How Do We Put This All Together for the Western Mind?

For the Hawaiians, without satellites or western instruments, they had to become ultra-sensitive and attuned to the cues offered by nature, to know what was the best time to fish or stop fishing for a particular fish.

They understood sustainability much better than many scientists today. They could figure these complex rhythms out by following things like the Phases of the Moon, the rising and setting of the stars, the direction of the setting sun, and other natural cycles around them. The wisdom was passed down through the generations through stories and chants.

They observed things like the Phases of the Moon with such regularity and intimacy they could tell you without even looking, what phase the Moon was in. Without any scientific instruments, they became the instrument themselves. They merged themselves with the natural world.

We want to encourage you to take some time to look at the moon. On a quiet, cloudless night, breathe in her beauty for a moment. Close your eyes and feel her energy, her presence. You are sharing this moment with not only the first Hawaiians but the ancient peoples all around the globe.

A poe kahiko – the people of old Hawai‘i

Hina ̒aikamalama – Goddess of the Moon, translates as Hina the light

Kū – Kūka’ilimoku –  God of Strength, War and Healing. One of the four Great Gods in Hawaiian Mythology