King Kamehameha the Great – The Unification of the Hawaiian Islands 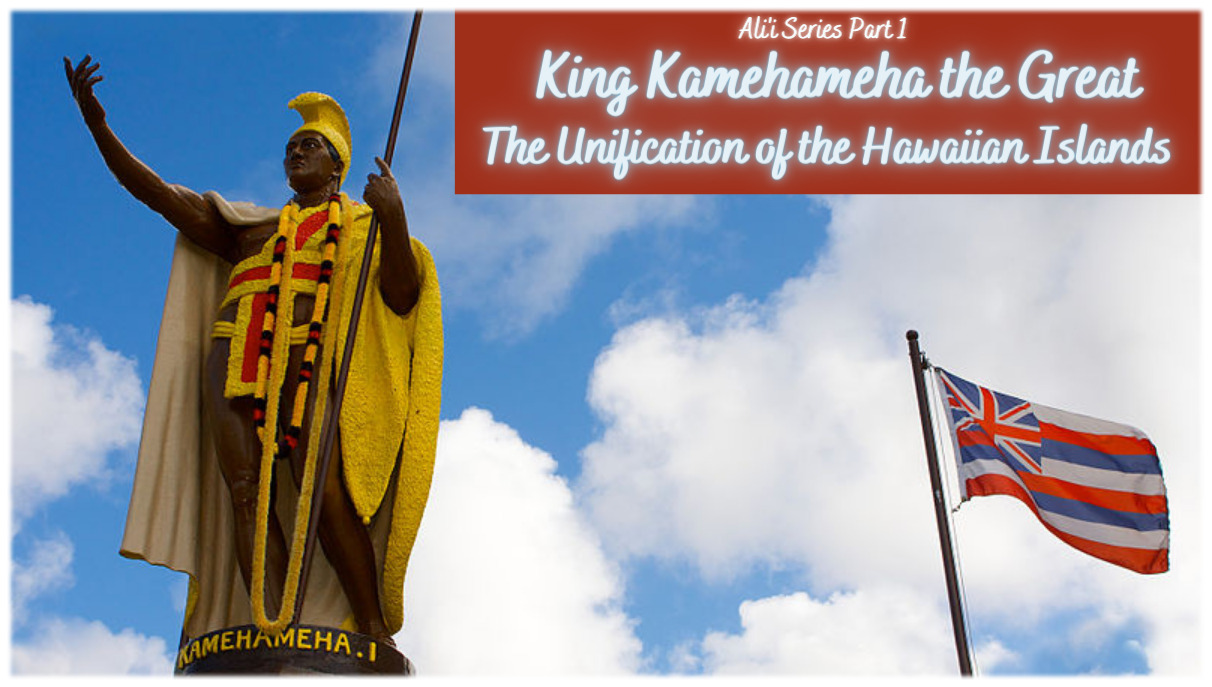 If you have ever visited Hawai’i, you have heard of the legendary King, Kamehameha the Great. He was the one person who was capable of achieving the impossible – uniting the Hawaiian Islands under one rule and one kingdom by 1810.

Kamehameha’s vision was much like that of the United States, to form one nation out of 13 colonies. This was to present a strong, unified front against foreign nations.

Kamehameha the Great did just that. He unified the islands before the same foreign powers could take control of Hawai’i.

This prevented any outside invader from gaining a toehold into complete domination of Hawai’i until January 1893, when the overthrow of the Hawaiian monarchy’s government occurred.

The unification of Hawai’i through warfare and negotiations took the better part of Kamehameha’s adult life. He was born between 1753 and 1761. Some scholars say, according to ancient chants, he may have been born in November 1758. This would make him 20 years old when Captain James Cook* sailed into the Hawaiian waters.

These were momentous times for Hawai’i!

Hawai’i, a remote island chain, had evolved over centuries with no substantial outside contact. Suddenly it was thrust into the era of western powers seeking their fortunes through conquest and colonization. Explorers from Spain, England, France, Portugal, Prussia, and the Netherlands were sailing the Seven Seas looking for ways to enrich their homeland governments and rulers.

These explorers and colonizers opened the door in the Hawaiian islands for the introduction of guns, religion, and disease. This completely transformed every single aspect of Hawaiian life and culture.

As these changes happened, Kamehameha the Great became the most successful of competing chiefs and rulers in using the superior weaponry entering Hawai’i. Moreover, he purchased or seized this artillery from various foreign adversaries.

By 1790 he began using muskets, cannons, and even his own western-built warship to help his armies conquer and rule his most powerful Hawaiian opponents and their fierce fighting forces.

Kamehameha did not become the first ruler of a unified Hawaiian Kingdom, simply relying on western weapons. Instead, his rise to power and dominance was the story of a brilliant planner, mastermind, and alliance builder.

He was a man possessing overwhelming physical prowess and skill at warfare.

His birth fulfilled a prophecy of a great ruler born under a special light in the sky. In 1758, the year he is thought to have been born, Halley’s comet was seen in the night sky over Hawai’i for many nights. 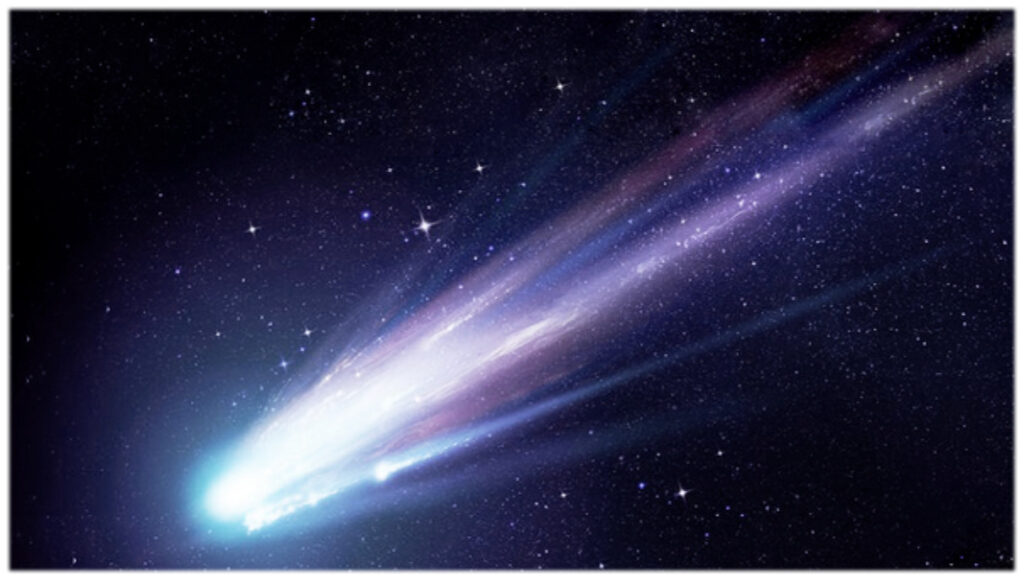 Because of the prophecy and the ubiquitous warring clans and chiefs, he was rushed and hidden in Waipi’o Valley on the Big Island. He came out of hiding around age 5 and was renamed Kamehameha (The Lonely One). 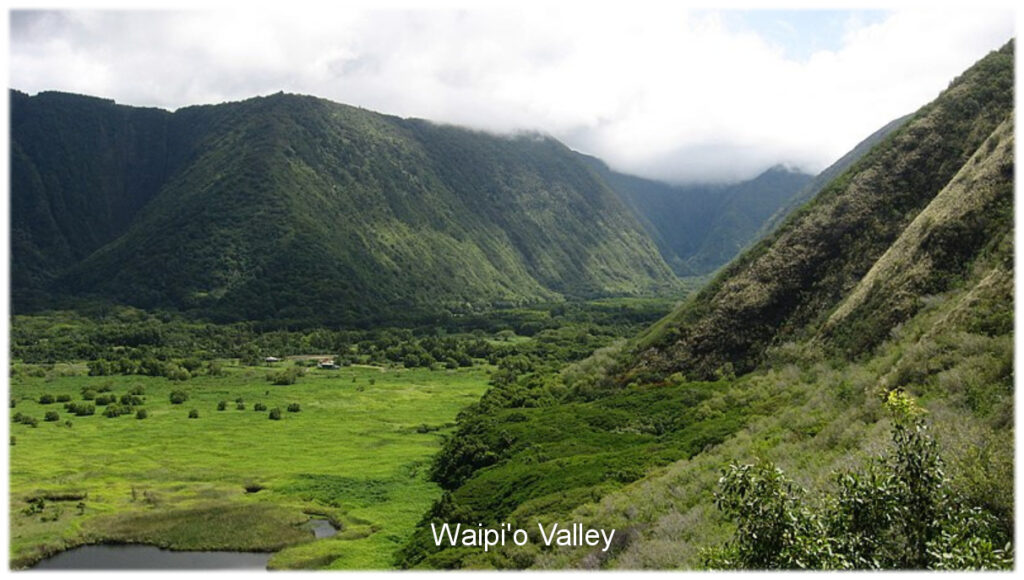 Another prophecy foretold of a great leader who would overturn the Naha Stone. The Naha Stone weighs around 3 tons. Needless to say, his rival enemy chiefs and kings disregarded the prophecy.

AND, Kamehameha the Great fulfilled it by overturning this giant stone. 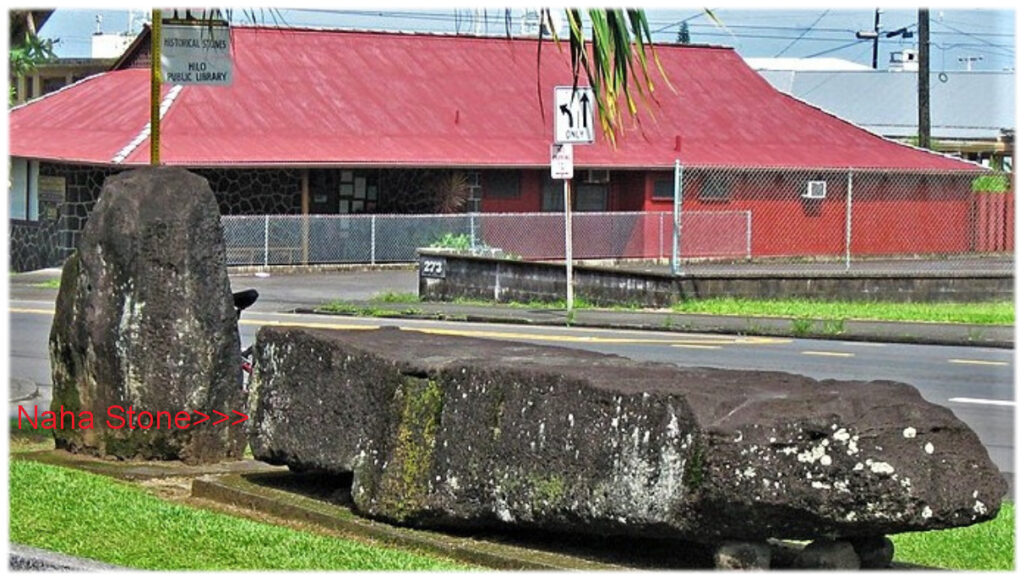 Besides the overturning of the Naha Stone, he was the best at ‘O’o ihe (spear catching game). This was when the warriors threw 7 spears at him. He would catch 3, deflect 3, and leaned away from the other one.

Kamehameha had many allies and mentors, including western opportunists, ready to help his cause in exchange for land. He was trained as a warrior as part of his family training to become an Ali’i (high ranking chief) on the Big Island.

The road to full unification began with Kamehameha’s campaign to be the sole ruler of the Big Island. This endeavor took many years. Finally, in 1782 when one of the Big Island’s kings died, a ceremonial division of lands took place to distribute his holdings.

Kamehameha and his allies saw the land division as unjust. This began a four-year civil war on that island.

An ancient tale of Game of Thrones.

Keoua, the ruling chief of the Big Island at the time, was Kamehameha’s last enemy for control of that island. The rival chief was invited to a large heiau called Pu’ukohola to negotiate peace. He was most likely induced to surrender. After this meeting, the Big Island was entirely under Kamehameha’s rule.

With the Big Island under his rule, he could turn his attention to the other islands, all of them ruled by King Kahekili, the King of Maui, O’ahu, and Kaua’i.

There were many years of war. Sea battles were fought using modern warships with cannons and muskets. In addition, there were foreign Empire Builders on both sides supporting both rulers. During those years, the King of Maui died and was replaced by his son.

… in 1795, Kamehameha was able to assemble 960 war canoes and 10,000 soldiers. He set sail to conquer the under defended and ill-prepared islands of Maui and Moloka’i. These battles were quick and decisive. 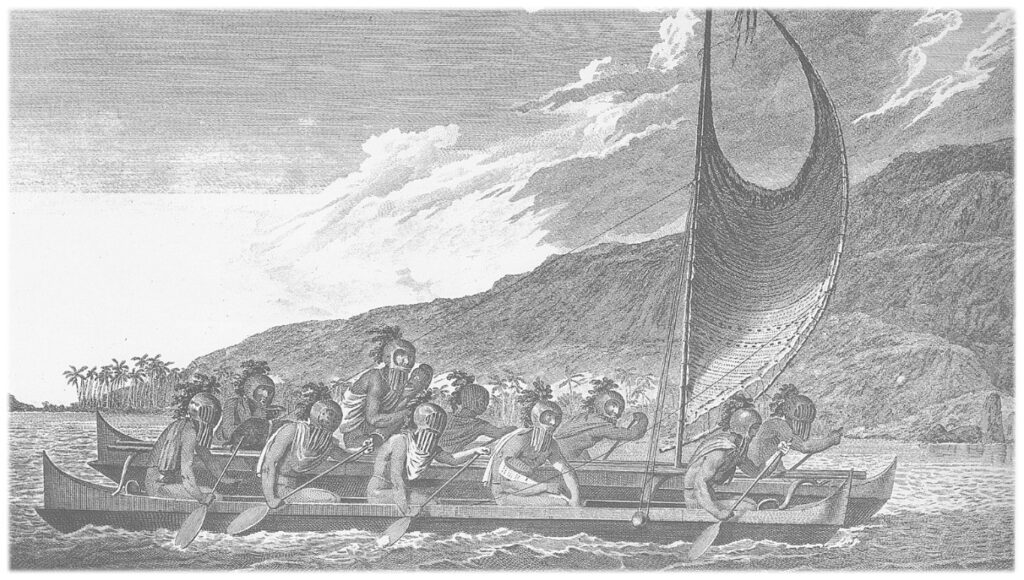 Once Maui and Molokai were subdued, Kamehameha prepared to conquer the island of O’ahu.  This was complicated by one of his allies switching sides to fight against him.

Again, after the long struggle for dominance of O’ahu, there was a final, decisive battle. It was at Nu’uanu Pali mountain ridge high in the mountains of O’ahu. This was the final major battle of Kamehameha’s campaign before conquering and unifying the Islands.

Next, Kamehameha would turn his attention to the last major island – Kaua’i.

The Great ruler faced many defeats and setbacks in the quest for Kaua’i. Everything from bad weather to disease in 1804. It was the time of Typhoid Fever which nearly wiped out his warriors and the Hawaiian People as a whole.

He laid low for several years on O’ahu, following the epidemic. While he was there, he built a vast army, a warship, thousands of war canoes, and a massive supply of western firearms.

Because of his vastly superior firepower and the number of skilled warriors, an American trader convinced the King of Kaua’i to surrender that final island on Kamehameha’s terms.

King Kamehameha became the first sovereign, ruling and uniting all the islands of Hawai’i in 1810.

The former king of Kaua’i continued to rule Kaua’i, but under Kamehameha. 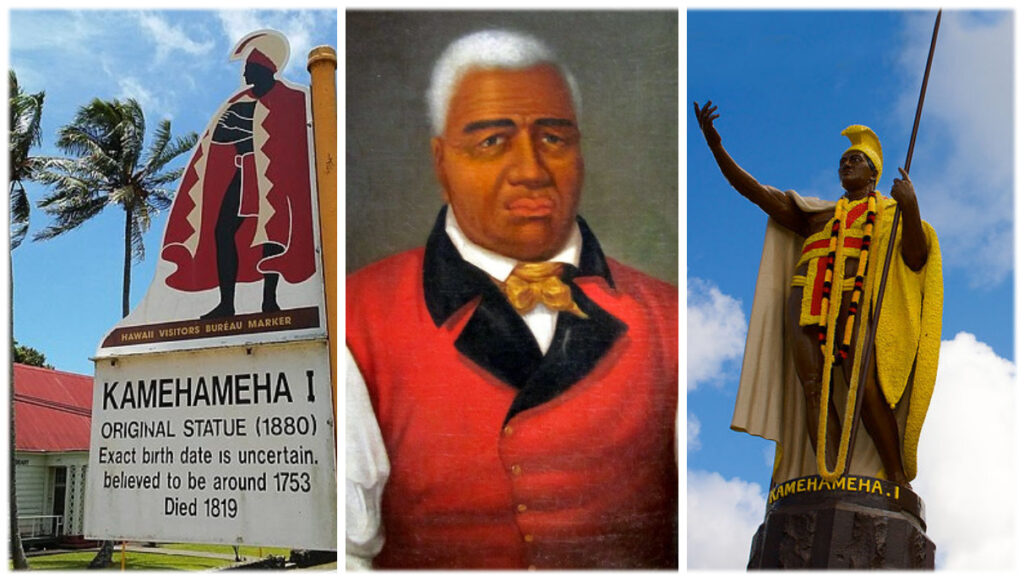 This has been just a glimpse of the many years of warfare and diplomacy under the direction of Kamehameha the Great. Finally, his and his many strong allies’ goal of unifying the islands under one rule became a reality. No matter how many foreign attempts to interfere or usurp the monarchy’s reign, the Kamehameha Monarchy ruled the Hawaiian Islands for 80 years.

That ended on July 12, 1898, when the Joint Resolution** passed the U.S. Congress. The Hawaiian islands were officially annexed by the United States. That, of course, is a story for another blog.

Kamehameha the Great’s undefeatable spirit lives on in the citizens of Hawai’i.

They remember the great ruler and conqueror who brought the Hawaiian people together under one rule and one flag.

His monarchy would live on through 4 more Kamehameha Kings, at which point the islands would begin electing their sovereign. 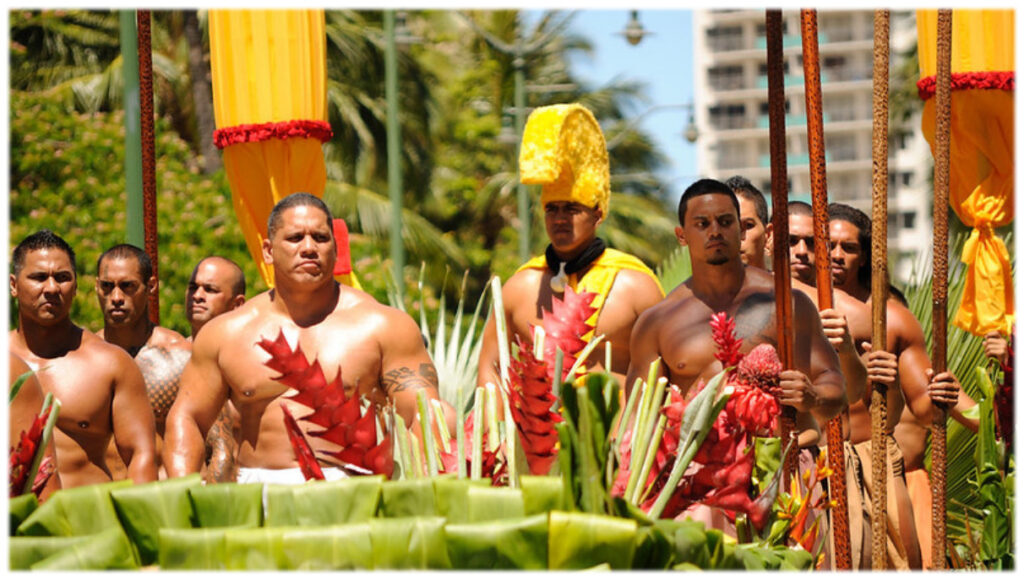 The illegal coup and overthrow of the Kingdom of Hawai’i is another long story, to be told another day. That was a military action that even Kamehameha could not have emerged victorious. But still, the Great Kamehameha will always live on in the hearts of Hawaiian people everywhere. He brought the people into the modern era with a great sense of pride in the unified islands known as Hawai’i.

**The U.S. officially apologized in 1993 with the United States Public Law 103-150, informally known as the Apology Resolution. It was a Joint Resolution of the U.S. Congress adopted in 1993 that:

“acknowledges that the overthrow of the Kingdom of Hawaii occurred with the active participation of agents and citizens of the United States and further acknowledges that the Native Hawaiian people never directly relinquished to the United States their claims to their inherent sovereignty as a people over their national lands, either through the Kingdom of Hawaii or through a plebiscite or referendum”