The early Hawaiians had no knowledge of modern-day science, physics, or prisms.

So just imagine, for a moment, what came into their minds when they saw a Rainbow? Was this a God or Goddess standing before them? Were these radiant colors in the sky an entry into another island, a door into Heaven where their ancestors were? Or was it a warning, a sign that trouble is brewing? As you would expect from the people who created Aloha*, the rainbow was considered a blessing. No doubt, the first voyagers to land in Hawai’i saw the rainbows and knew they were in the land of blessings!

These arcs of glowing multicolored light reach deep into our collective human consciousness and stir memories that touch us deeply. They move us to stop everything and just witness this amazing planet and all its blessings.

Do you remember where or when you first saw a rainbow?

Did you point into the sky and ask, Mama, what’s that?  Or did you first see one in a child’s book that your tutu* was reading to you? Maybe it was in a story you studied in school about a leprechaun and a pot of gold? Or, if you grew up “living with rainbows,” perhaps it was a story about a Rainbow Maiden in Manoa Valley, on the island of Oahu, who was known to dance across the jagged mountain cliffs, painting dazzling colors.

The Hawaiian name for Rainbow is ānuenue*.

One of the State of Hawaii’s nicknames besides “The Aloha State” is “The Rainbow State.” Car license plates have portrayed a rainbow since 1991. 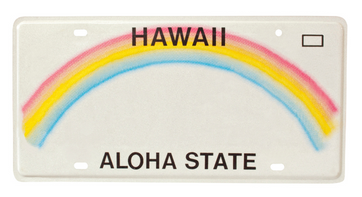 The University of Hawaii’s men’s sports teams are called The Rainbow Warriors, and their girls Volleyball team is The Rainbow Wahine*. There are many songs sung about rainbows and a myriad of hand motions in hula depicting them. There are even Rainbow Eucalyptus trees in Hana, Maui. 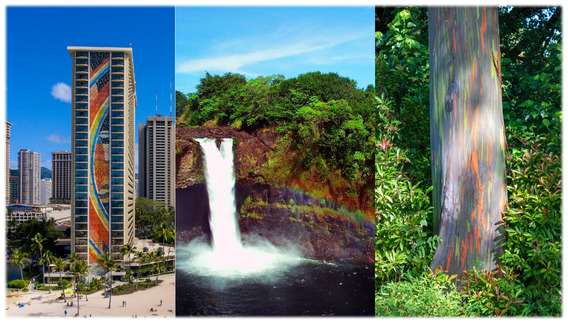 Many hotels sport the Rainbow Bar, Rainbow Room or the Rainbow Tower. Hilton Hawaiian Village, the famous landmark hotel in Waikiki, has a beautiful mosaic of a rainbow for all to see.

Let us not forget the stunning waterfall outside of Hilo on the Big Island of Hawai’i, called Rainbow Falls.

It is named Rainbow Falls as there is a rainbow at the base of it more often than not.

Rainbows are a frequent occurrence in Hawai’i. They are primarily due to the regular passing showers and lovely misty rains, combined with the abundance of sunshine, which are both constant companions in the vibrant, blue skies.

Of course, Hawai’i is not the only place with rainbows.

When rain opens up to sunlight that is low in the sky, there will most likely be a rainbow.

So, why are rainbows in Hawai’i seemingly more spectacular?  What makes visitors and locals alike vacate their cars on the side of the road to capture photo after photo of Hawaii’s breathtaking ānuenue?

Before we speculate on the answer to this question, let’s start with how ānuenue fits into Hawaiian history and mythology.

Mānoa Valley on ‘Oahu is the valley known as the royal palace of rainbows.

According to legend, the Rainbow Maiden was born there of divine wind and the ua wa’ahila* (the rain particular to Mānoa Valley). Her name was Kahalaopuna*.

It was in Mānoa Valley that she danced across the pali* and throughout the sky, painting those brilliant bands of colorful light. It is said that the beautiful Rainbow Maiden can be seen wherever the light of the sun caresses the misty rain. 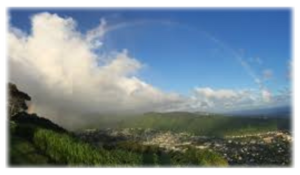 What does this have to do with rainbows? Why are they so vivid in Hawai’i?

Apparently, rainbows need some type of microscopic particle to form around a particle, which is called a nucleus.  Many things can be a nucleus for rainbows on big land masses. For example, on the mainland, rainbows often use dust, car exhaust, and other air pollutants as their nucleus.

Due to the trade winds and Hawai’i being the most isolated landmass in the world, there are not enough pollutants to serve as a rainbow’s nuclei (another reason we love it here!).

So, what is the secret nucleus for Hawaii’s stunning rainbows?

Salt particles swept up from the ocean surface and carried to the islands. These salt particles carried on the air currents are what make Hawaiian rainbows so exquisite.

In Hawai’i, everything is “larger than life.” Not only do we have exquisite rainbows but we have several different kinds of rainbows. So, let’s talk for a minute about the different types of rainbows.

One rainbow is a gift. But what about a double rainbow or even a triple rainbow?

First of all, the raindrops responsible for the single or primary rainbow are very uniform in size, spacing, and numbers. That is why a rainbow can change from moment to moment. Bright to dull, single to double, full to half.

Then, we have the double rainbow, which is even more spectacular than the single. This one, hovering just out of reach, besides the road, compels people to hop out of their cars and snap photos. If you pay close attention, you will notice that the colors are reversed in the second double rainbow.

After the double rainbow, we have the triple rainbow, which is impossible to describe. You must use your imagination and remember the Rainbow Maiden. She must have a hand in this!

And, let’s not forget the very rarely seen MOONBOW… 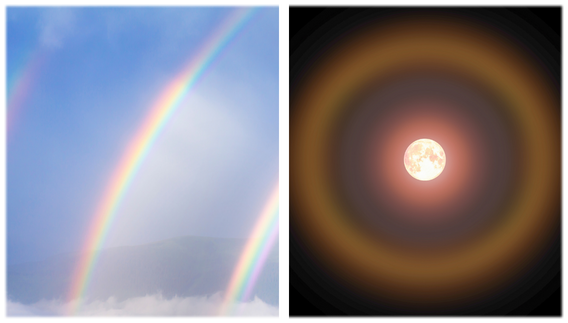 This seldomly observed lunar rainbow can only be seen at night and is produced by the light of the moon. Usually, when the moon is full or almost full. It contains all the rainbow colors, but humans see it as vivid white since it is at night. There can be an exceptional moment when the mist and the light create more colors. On rare occasions, when the moon is nearly full, and the mist is just right, you can also see the actual arc of a moonbow, just like the regular daytime rainbow, arced across the sky with a pot of gold at the end. Maybe, these are the full moon nights when the  Maiden can’t sleep?

There are mixed views of rainbows in Hawai’i. At unusual times it may signify misfortune. Another time it may announce that a chief is journeying, watched over by the gods. It is best to give this chief your full assistance!

To complete our rainbow story, here is an ‘Ōlelo No’eau*

The royal eye rests above.

A rainbow – a sign that the gods are watching the chiefs – is now visible.

The Hawaiians call the appearance of a rainbow a hoailona*. It is a message, an omen, from the ancestors, or the gods who appear to favor what has happened or what is being planned. It can be a bridge to the future or to the past. But mostly, like the rain, rainbows are considered a blessing!

Some cultures, like the Indonesians, believe that the rainbow is a Soul Boat to carry souls.

Others, like the ancient Greeks, think that the rainbow is the Goddess Iris, a messenger from the gods. And, some people from Africa see rainbows as a divine bow to fire arrows. Rainbows inspire us to reach outside our daily lives and touch a miracle regardless of where we are. To feel the mystery of life, the awe and wonder, and smile, knowing we are part of something miraculous.

Aloha – love, compassion, warm greetings or farewell (a few of the many descriptions)

Hoailona – an omen or a sign, often felt or known by someone before it happens

Wahine – woman (young or older, but not a child)