Here You Find the Amazing and Remarkable History of Hula 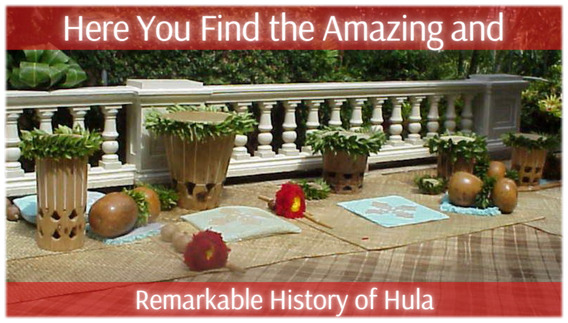 The Hula – it reaches inside your heart, to a place you may have forgotten, and calls forth distant emotions and memories.

Visitors to Hawai’i, experiencing the Hula for the first time, are transfixed, pinned to their spot, eyes wide as the ancient chants call forth a forgotten past. From guttural growls to high, sing-song chirps and pounding drums, the Hula catapults us into a time in Hawai’i when men and women settled in a new land and grew into an isolated culture and nation from the world for hundreds of years.

Visitors sometimes say the Hawai’i of today is modern and “not what they expected.” Because, yes, it is modern. This attitude disappears when the same person experiences their first Hula Performance. From then on, all they can say is how much they love Hawai’i, and someday they want to live here.

They have fallen in love with Hawai’i through the Hula.

They don’t realize that an underlying allure draws visitors here, which keeps them longing to come, yearning to return, and hoping never to leave. This compelling attraction begins with the gorgeous beaches, the year-round springtime climate, and double rainbows.

But then, the Hula! And the summer romance for Hawai’i turns into a lifelong love affair.

The abundance of diverse culture, deep love, and respect for the land and its mysteries came with the Polynesians. It has defined their culture here since 500 A.D. This is what fills us all with love for Hawai’i. We want to embrace this island life from days gone by when life was less complicated. When daily activities may have included walking the forest trails, paddling a canoe we had built, and playing the flute to our lover across the valley during sunset. To feel a small part of this enchanting past is captivating.

The Legend of How Hula Was Born 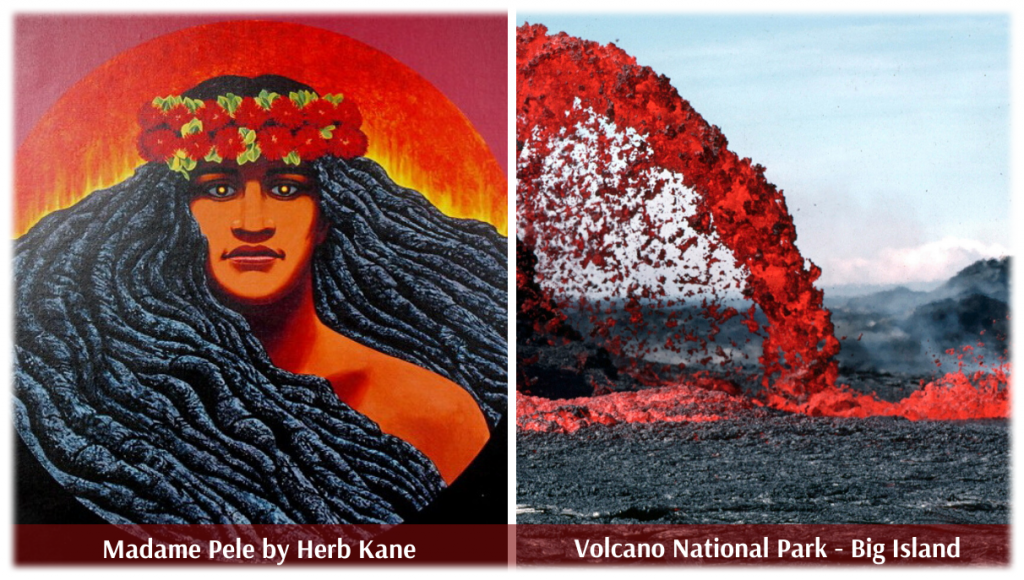 Hawaiian Oli – “Nature is full of voices for our ears”✥

Without the oli* or mele*, there could be no Hula. Polynesians chanted long before they set sail to find their new home in Hawai’i and their inspiration came from the sounds all around them.

Oli and mele convey various traditions, stories of creation, legends, mythology, worship, and honor for royalty. Some chants have hula dancers, and some may be chanted by one or more people with no dancers.

Hawaiians did not have a written language until after the arrival of European explorer ships. Aside from oral customs, Oli and Hula were one of the primary ways to preserve history:  legends, genealogy, lifestyle, particular events, special places, and honor chiefs, gods, and the monarchy. Like people everywhere, Hawaiians, as far back as 500 A.D., loved telling stories and passing down the history and culture so important for any society. The Hula made history easy to remember, stored in the movements of their bodies.

Today, Oli is recognized as the highest form of the Hawaiian language

In days gone by, there was so much more time for talk-story*. Much of the history would be passed down through the generations from the kupuna* to their mo’opuna* sitting together and literally talking-story. 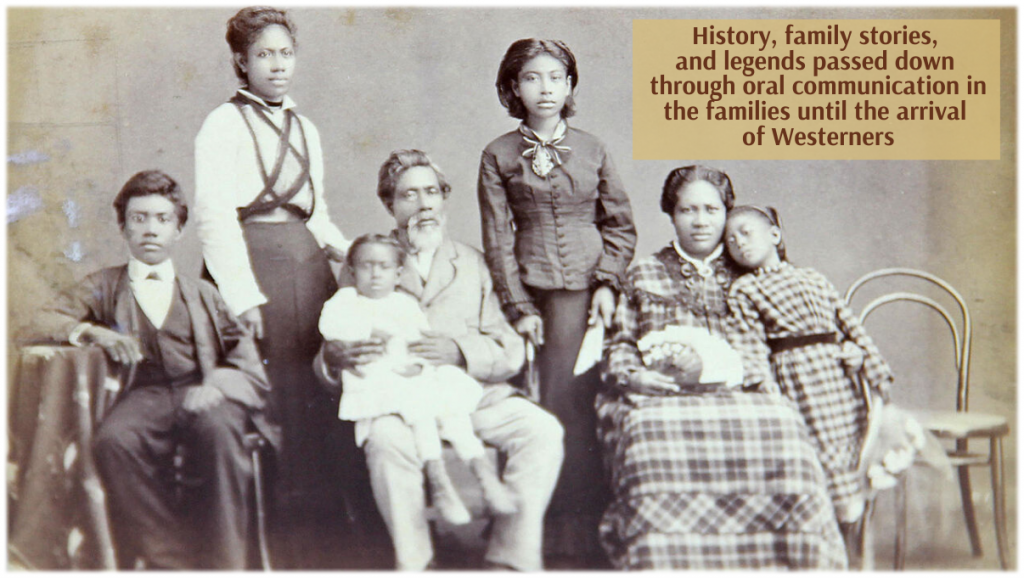 Without a written language, these practices kept the stories of the Hawaiian people alive, as it still does today.

Chanting was a natural expression of praying and even conversing with their Gods. As hand movements are also an expression of communication, the natural progression of hand and body movement evolved into the Hula.

We have many traditional hulas written by Kumu Hula today. They follow a particular protocol of old, yet are fresh and reflect carrying forward the past within the present.

Hula Kahiko* is often referred to as traditional Hula. This more historic style relates back to pre-contact*. The traditional style of Hula Kahiko was usually created to praise kings, queens, and chiefs and to honor Hawaiian Goddesses and Gods. Pele, the goddess of the volcano, was often the subject of many Hula Kahiko. 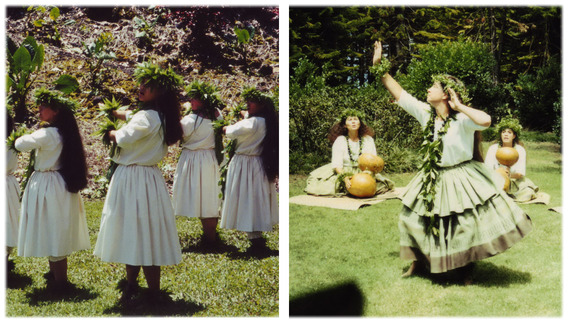 In ancient times the dancers were men and women. They were scantily clothed, and the dance was performed to chants and beats made with various implements. 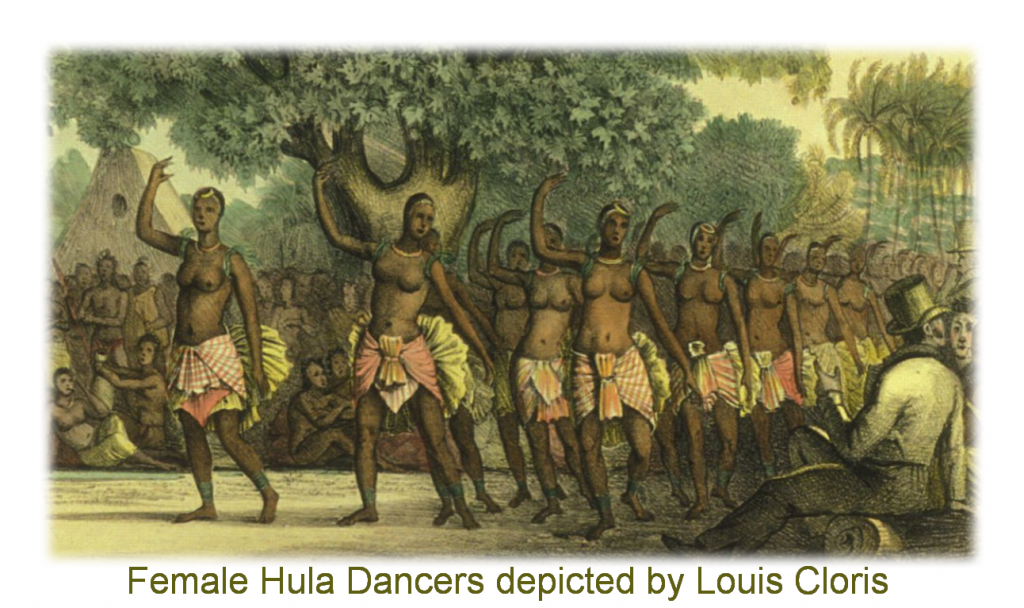 This artist was aboard the Russian ship Rurick, which visited Hawai’i in 1816 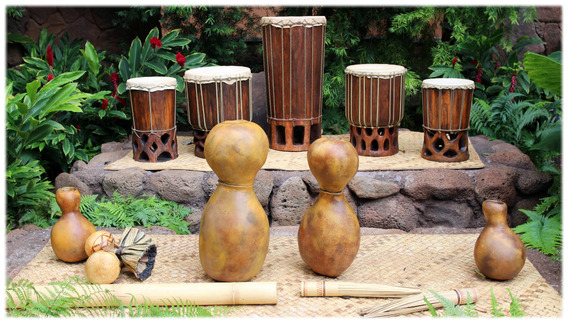 “While the origins of hula may be shrouded in mystery, they are always entwined with matters of the spirit.”✥

The ancient period of Hawai’i ended when British Commander James Cook arrived with his 2 ships in 1778. Hawaiian life began to be recorded for the first time by westerners who were visiting regularly and often staying for months. Their writings have given us great opportunities to look back on the Hula during another time of life in Hawai’i.

Under extreme missionary influence and pressure, in 1830, Hula and Hawaiian language were forced underground. Hālau Hula* gathered in rural areas to be able to continue their traditions.

Many Hawaiians had begun to dress like missionaries as many had converted to Christianity.  They took Christian names and began to drop their Hawaiian-ness.

This was the beginning of what could have been a lost culture and language for the Hawaiian people. The trend toward western beliefs was primarily due to Queen Ka’ahumanu*, who was queen regent at the time. She embraced Christianity and issued an edict banning public Hula performances. 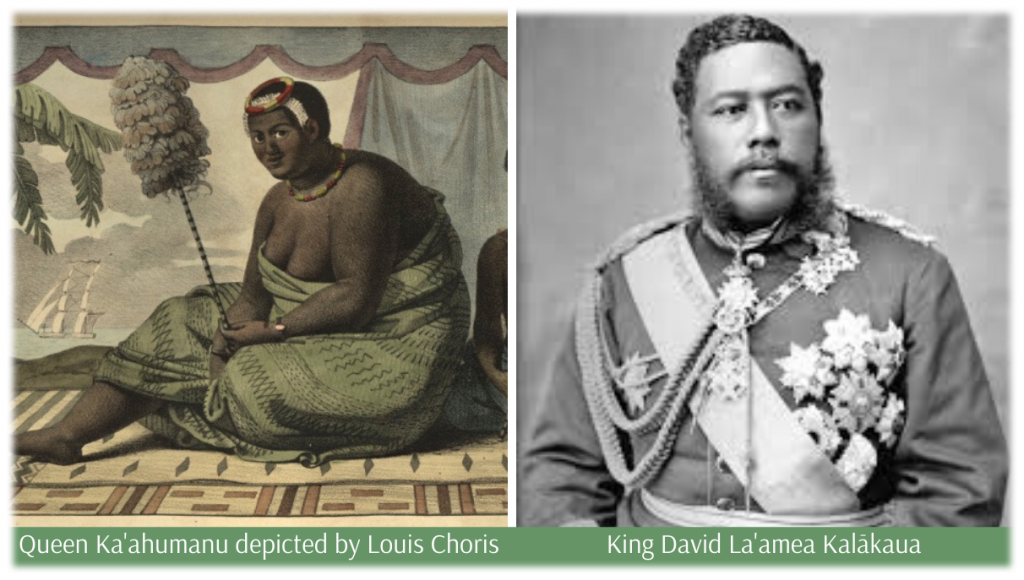 For the first time since its beginnings, Hula began to evolve in a completely different style during the nineteenth and twentieth centuries. From as early as 1865, the form called hula ‘auwana, became popular, blending native and foreign elements.

It was adapted from traditional hula ideas of dance with mele from Western influences. The Hawaiian people have beautiful voices and were drawn to melodic harmony and new instruments like the ‘ukulele.

Hula ʻauana still tells a story;  the stories may include love, flowers, and recent events. The dancers’ costumes are less revealing, and the music was heavily Western-influenced. 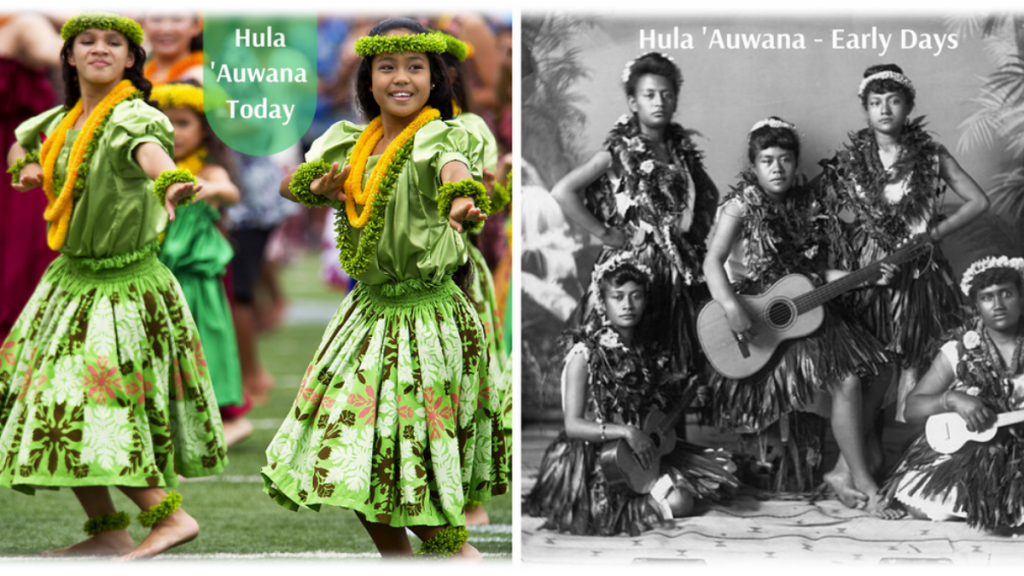 Modern society was flourishing in Hawai’i in the late nineteenth century.  Steamship travel had become common, and people came to Hawai’i from around the world.

Hula dancers and musicians toured the U.S. mainland and also greeted the ships when they came to our harbors.

Nearly 50 years after Queen Ka’ahumanu had banned the Hula, David La’amea Kalākaua was elected king. He was also called the Merrie Monarch because of his cheerful personality mixed with his love of entertaining, singing, playing the ‘ukulele, and of course, his deep love of the Hula.

On his birthday and coronation jubilee, the Hula made a resurgence.  The celebration of this king, who was the first Hawaiian King to circumnavigate the world, was just what the kingdom of Hawai’i needed. A celebration of its life, culture, and history.

Although Hula was still criticized for its previous primitive roots and Pre-Christianity morality, once it surfaced at the jubilee, it stayed.

In addition to Hawai’i, Hula and the Hawaiian language thrive all over Japan, the U.S. mainland (particularly California), and many other places.

Hula dancing is a complex art form, and many hand motions are used to represent the words and emotions in a song or chant. The upper body and the lower body dance together but do different things, sometimes with different rhythms, making it challenging to master.

To complete our story of Hula, here is an ‘Ōlelo No’eau*

A Rule in Hula

When you come to Hawai’i, you must experience a traditional Hula performance.

Many of them are not performed primarily for tourists but for the local people as part of the vibrant, modern Hawaiian culture. You can find shows in many unexpected places. Local Hālau Hula will perform on weekends at different shopping malls, and if you’re really lucky, your visit might coincide with a big performance at a venue like the Maui Arts and Cultural Center.

Once you have been to a Hula performance, you have truly been to Hawai’i. You have shared in the power and inspiration of Hawaii’s First People and the awe, overwhelming joy, and reverence they felt when they too, contemplated their incredible island home.

Hula – Dance of Hawai’i and its people

Laka – The Goddess of hula. Literally: gentle and attracting.

Moloka’i – Island off the northeast of Maui.  Part of Maui County

Pre-contact – Before 1778 and the arrival of westerners