The Hawaiian Lūʻau – A Royal Feast Fit for All

One of the most enjoyable things for foodies is exploring new and unusual dishes which are part of the land and culture that have never been experienced before.

Many times specialties of culture have evolved and stood the test of time over and over again. You just know they are going to be good! Like listening to music in a foreign language with unusual instruments, it touches you in deep places and brings a flood of delight.

When foodies travel, one of their top priorities is finding out about the local cuisine.  We want to know where to experience the best version of the iconic, local recipes. Like a treasure hunt, half the fun is in searching out and discovering the perfect dish. That special small place to eat filled with locals.

Some foodies will even develop a longing for a specific kind of typical dish.  It compels them to center their travel plans around finding and experiencing that certain delicious creation!  They generally look at places to eat and where to try local cuisine first.

Getting the taste buds stimulated can often guide a foodie to where their travels may take them.

When visiting foodies think about Hawai’i and food, one of the first things on their list is their favorite fruits. True foodies will make sure to come during the season if they have a passion for mangoes or dragon fruit. But they can indulge to their heart’s content all year long with Hawaii’s fabulous strawberry papayas, little creamy bananas, heavenly avocados, and even fresh coconut. And, of course, the delicious water right out of the shell, and the spoon meat scooped out after. YUM!! 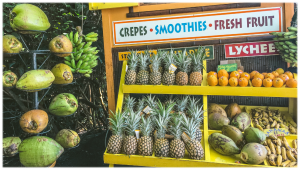 And then, there’s the rare treat of a sweet, freshly picked pineapple, a foodie extravaganza you cannot often find on store shelves. They are found only in the perfect, not too hot, not too cool, climate of Hawai’i. And, the pineapple is the one fruit you can take home from Hawai’i to bring back all those exotic memories of tastes of your time in the islands.

We don’t need to tell you how amazing these tropical fruits taste or how abundant they are.  Brok da mout* is all we need to say about that!

What many vacationers may not know about Hawai’i, is that there are a variety of foods here today that were carefully hand-carried, in small, carved canoes, across thousands of miles of open ocean to get here. They were cautiously transported by the first Polynesians who journeyed here way back when. They knew they would need some of their favorite things to generate a reliable food supply in their new land. So they carried certain edible plants and specific animals to feed themselves and their progeny all the way from the south pacific many years ago.

Hawai’i has come a very long way from those days and now includes widely varying cultures and ethnic tastes, which add a diverse palette of preferences and flavors. Yet still the original tastes of Old Hawai’i rule! They are still #1 everywhere! And one of the classic places to begin your journey to discover some of these original favorites is at The Hawaiian Lūʻau.

If you have been to a Hawaiian Lūʻau, perhaps you remember that the table of food is long and filled with many dishes, dishes a lot of people may not recognize.

The Hawaiian Lūʻau is an ancient ritual of bringing the people of the town or village together to celebrate. And one thing you will learn in this land of Aloha is that there is no celebration without food, lots of delicious food!

Be it the launching of a new canoe, a new home, or the birth of a baby, there are always plenty of reasons in any culture to come together and ‘aha‘aina*. 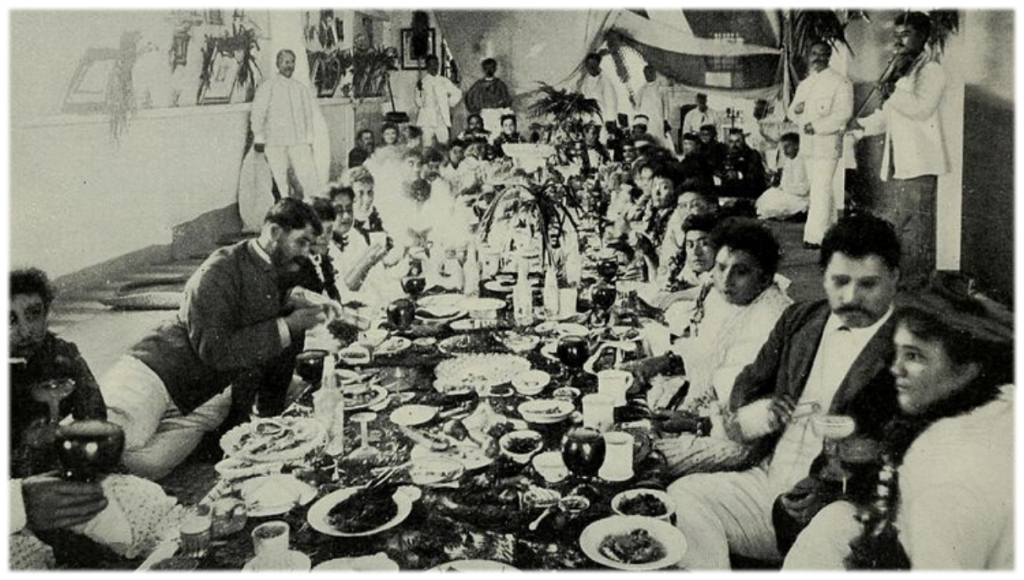 Poi, to pacific islanders, is like potatoes are to the Irish or pasta is to the Italians.  It is the staple starch in Hawaiian cuisine. It is a food that James Michener talked about in his classic book, Hawai’i: Poi is a food that an old man with no teeth and a small baby can eat and digest perfectly.

Poi is a thick paste made from Kalo* tubers, which are pounded to create a sticky consistency like pudding.  Sometimes it is watered down to feed babies or the elderly. Because it was traditionally eaten with your fingers, there is a modern-day expression to describe the thickness of it by how many fingers you need to scoop up a bite.  The fewer fingers, the thicker the poi.

Its unique flavor is definitely an acquired taste. It can be slightly sour from the fermentation that comes in the preparation process.  Adding a little lomi lomi salmon (see below) to your poi is one of the best ways to learn to love it. 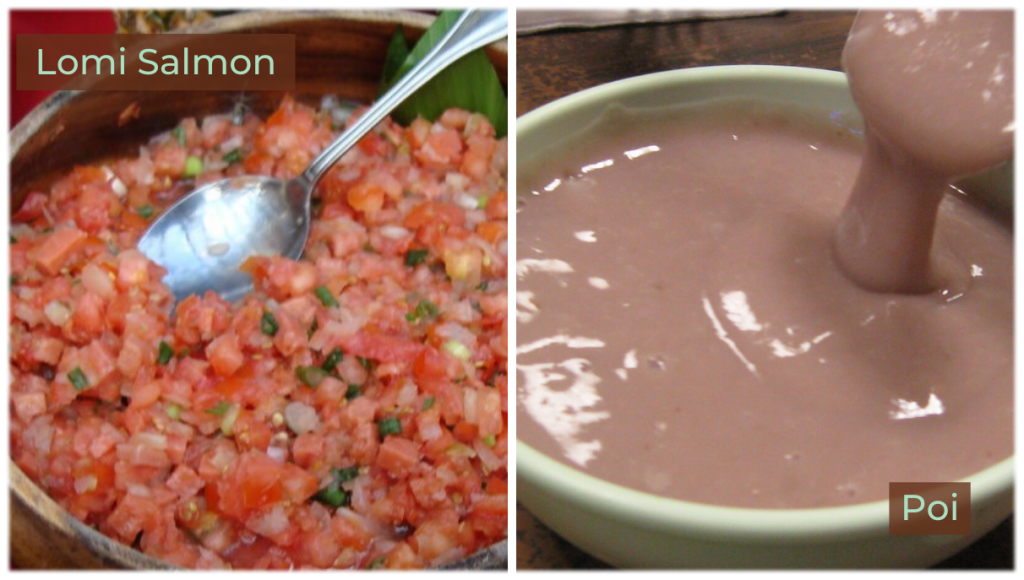 Although Lomi Salmon was brought to Hawai’i by other pacific islanders, it is now a traditional dish that will never be absent from the table of a Hawaiian Lūʻau or any other Hawaiian lunch or dinner for that matter.

First, the raw salmon is cured with Hawaiian salt, and then it is mixed with diced sweet Maui onions, scallions, tomatoes, and hopefully, homemade chili peppah wadah*.

It presents as a type of salsa or chilled tomato salad and can be a great side dish for almost anything.  Even scrambled eggs in the morning. It has a delightfully fresh and tangy taste, with just the right amount of salt and salmon texture. And, as we said, it goes excellent with poi!

There are just 4 ingredients in Lomi Salmon. Want to try it??  It is super simple to make. 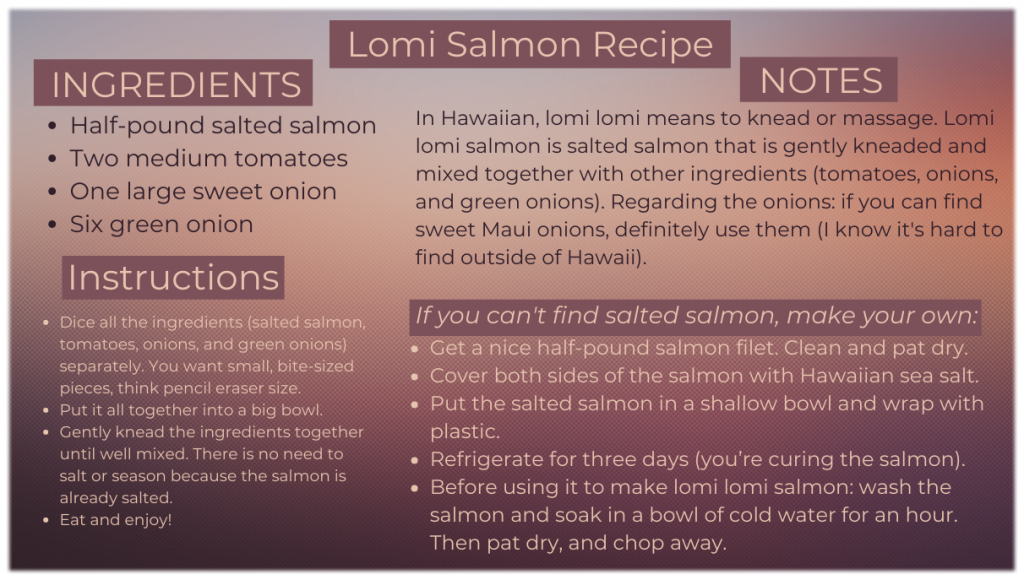 Laulau is made with layers of leaves from the kalo plant filled with butterfish, fatty pork, and sometimes chicken wrapped and steamed in ti* leaves. It is fragrant, meaty, and very juicy.

Laulau are traditionally cooked in an imu* with kalua pig (see below) for hours, which infuses the food with an indescribable smoky flavor.  The kalo leaves become a lot like juicy, flavor-packed, cooked spinach.  It is onolicious*. 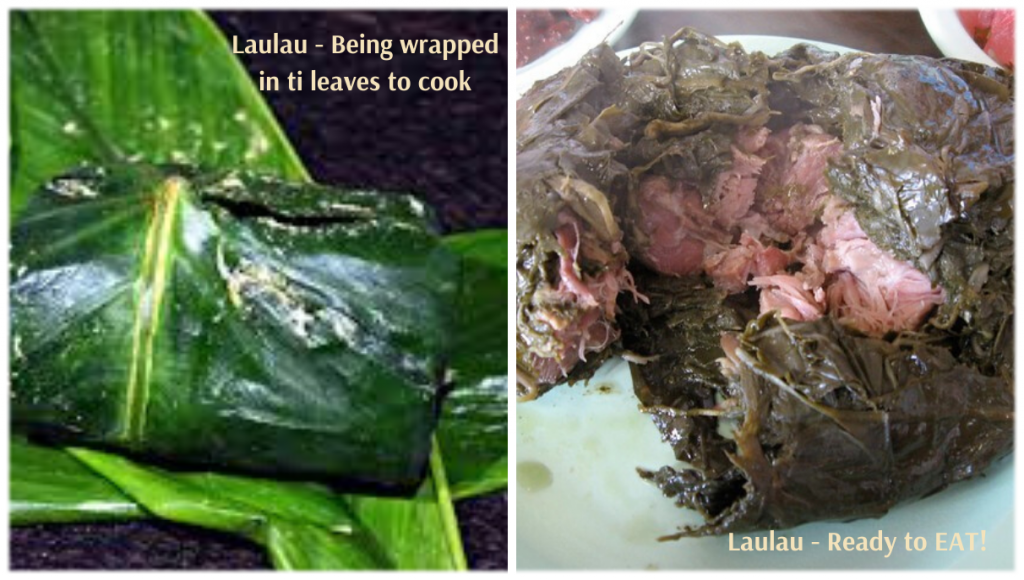 The word kalua* means to bake in an underground oven and in Hawai’i, the imu is that underground oven.  Yes, it can be a bit confusing.  All you have to know is that Kalua Pig is baked in an imu.  The rest is a taste bud delight!

Creating the imu is a whole art form by itself.

First, a big fire is made in the morning.  The big cooking stones are laid on top of the fire to heat up. In the previously dug imu pit, the hot cooking stones are carefully placed and layered in. It is then covered with pounded banana plants and leaves on top of that. Finally, the whole pig, wrapped in banana and ti leaves, is reverently placed on this bed of hot coals and is covered with more of the same and left alone for several hours. Often laulau, sweet potatoes, or other delectables are cooked in the imu as well. Yes, onolicious AND broke da mout.

The pig, after being cooked to perfection, is removed, seasoned, and shredded. Ever heard of “pulled pork?” 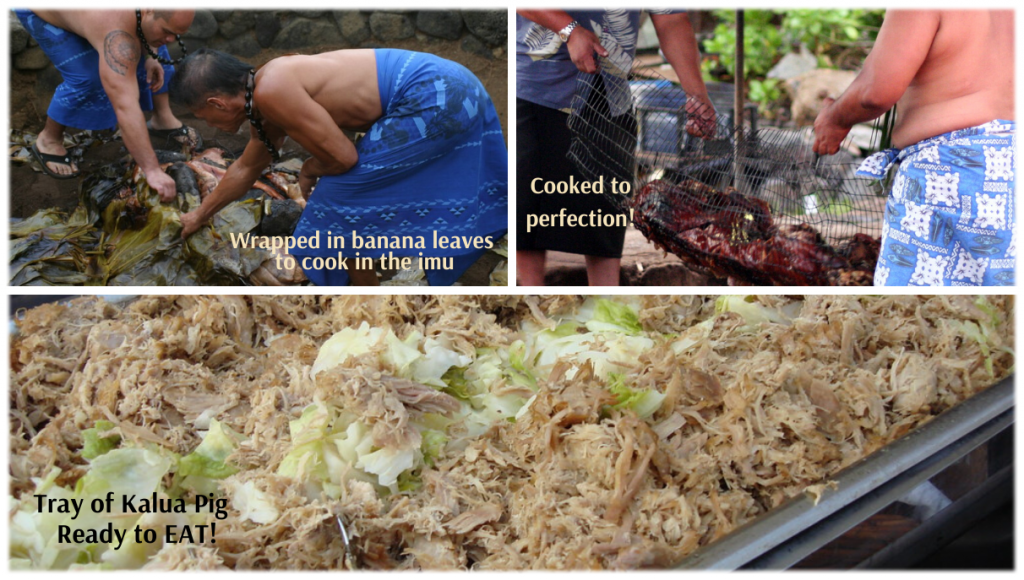 Ahhh, Hawaiian Coconut Pudding.  What can be better than that?  How about chocolate Haupia Pie or Pumpkin Haupia Pie.  Mcdonald’s in Hawai’i even has deep-fried Haupia Pies now and again. No lūʻau is complete without the special treat of Haupia for dessert. Some people may even eat it first!

Rich, creamy coconut milk is the base. It is prepared in a way that sort of resembles the firmness and texture of jello, but thick and creamy. In this incarnation, it can be cut into small serving pieces. In its pudding form, it is easy to mix it into other forms of desserts like pies, cakes, and gelato. 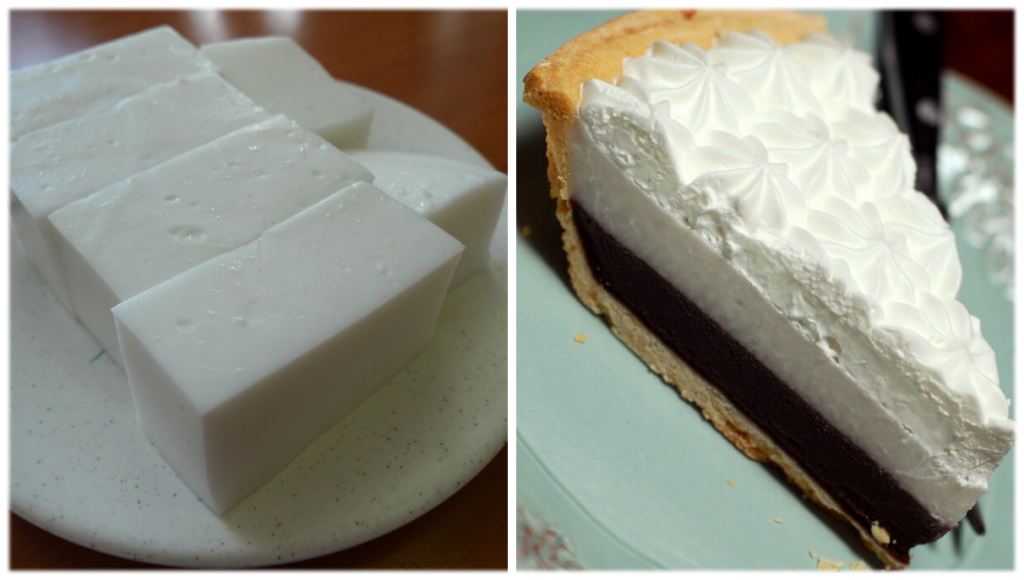 Put it All Together and Your Hawaiian Lūʻau Plate May Look Something Like This: 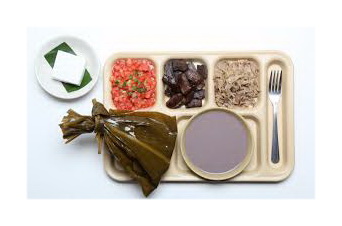 Of course, this tiny serving will only serve as your Pupu’s*. You won’t be able to decide which part you like the most, so, like most people, you will have to go back and get a whole other plate full to see if you can figure out which selection is your favorite. It is a dilemma not easily solved. For some people, even three helpings of this food of the gods and goddesses are not enough to decide which is best. But don’t worry, the lūʻau will last for hours.  You have plenty of time. There will be lots of hula and other Polynesian dancing, fabulous music, and stories and jokes.  By then, you guessed it; more fabulous lūʻau food! Now I’m hungry!

‘Aha’aina – a reason to eat, a feast for an occasion, as in ‘aha’aina laulima*.  A feast after a job is finished, as in the completion of a house or canoe