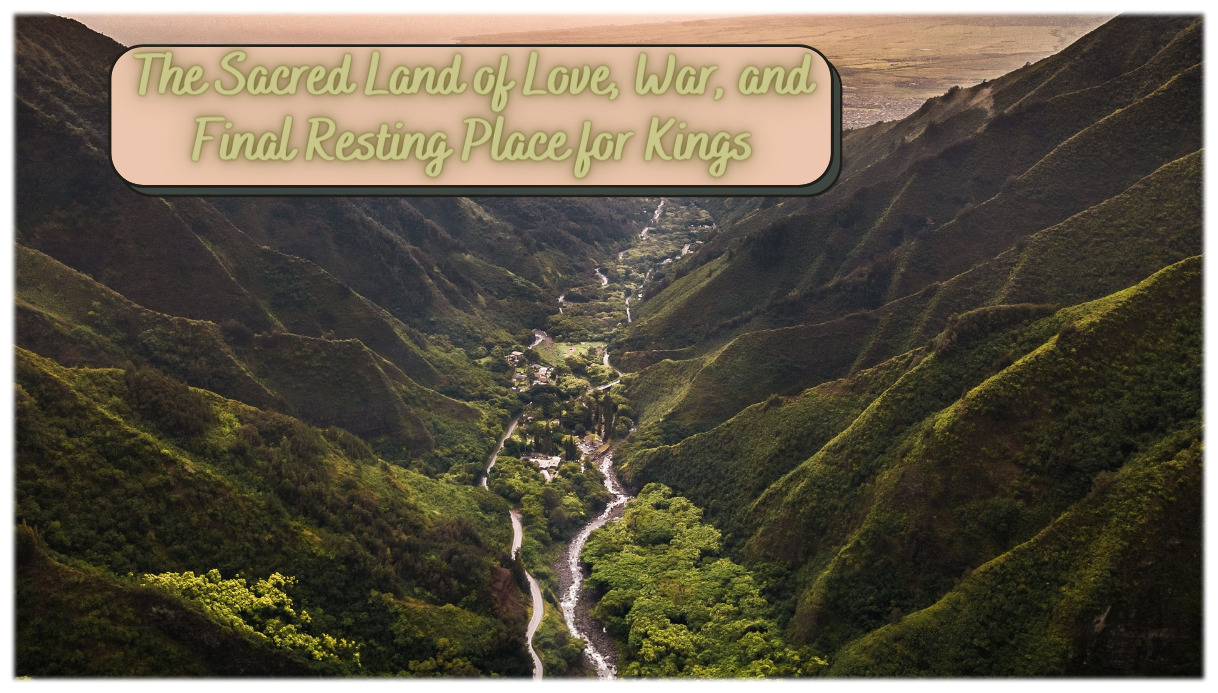 ʻĪao Valley holds a special place in the hearts of people who live on Maui.

The valley is accessible, it takes only a 10-minute drive from the town of Wailuku, Maui’s County seat. She glows with beauty, often lying at the foot of a rainbow. You can see her glisten with gorgeous sun beams shining through the broken clouds like a scene from the Sistine Chapel.

This could reference the many aspects of the different shaped clouds that escort her through the days and nights. Sometimes she appears ghostly in the mists or flamboyant in the full sun, wearing her most beautiful colors. Whatever incredible garb she is wearing now, she causes those of us who live on the island to stop and savor her magnificence.

We all like to stop and look at Maui’s spectacular sunsets, and for the lucky morning people, sunrises. But the people who call Maui home express the wonder of the ever-changing views of ʻĪao Valley almost every day.

Quite often, you will run into a friend or cousin, and they will comment, “Wow, did you SEE ʻĪao Valley today?” 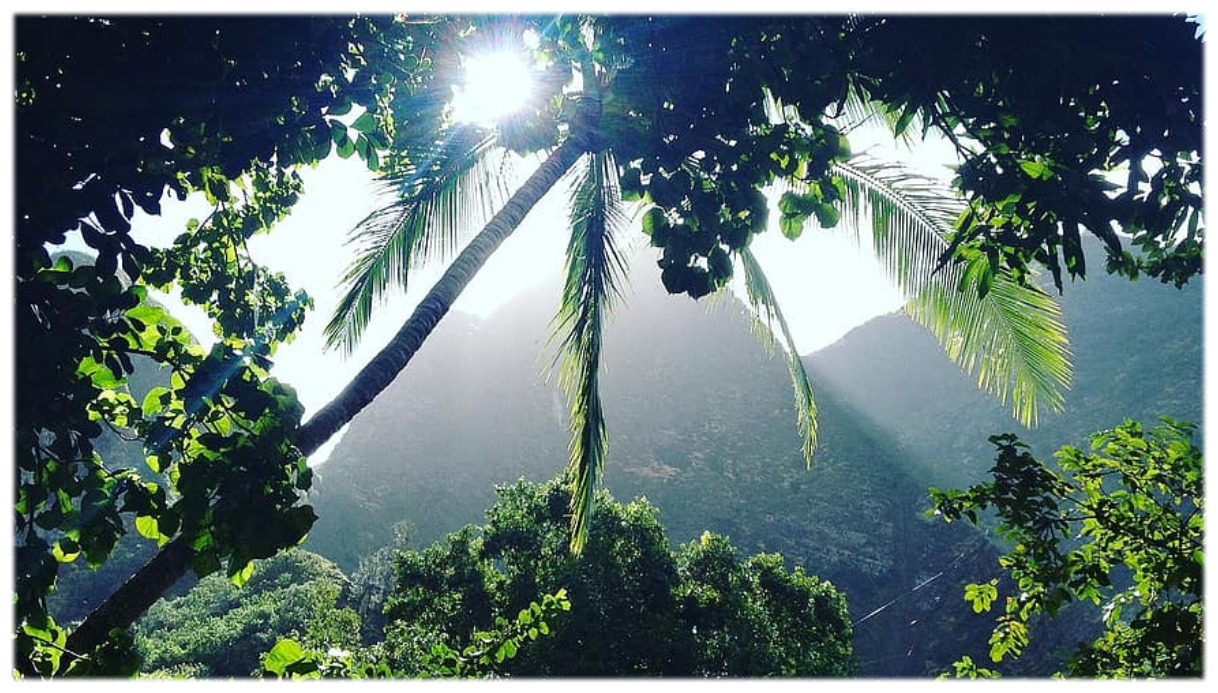 And you will agree, she was stunning. More beautiful than ever. And that is just the first layer, appreciating her beauty from afar. The next layer is seeing her up close.

On a bright, sunny day, many folks will head to ʻĪao Valley’s stream for a hike up the river bed to a quiet spot and enjoy a fresh, cold mountain water dip. ʻĪao Stream is not deep or wide enough to swim, but you can immerse yourself in the water and relax in the refreshing coolness. 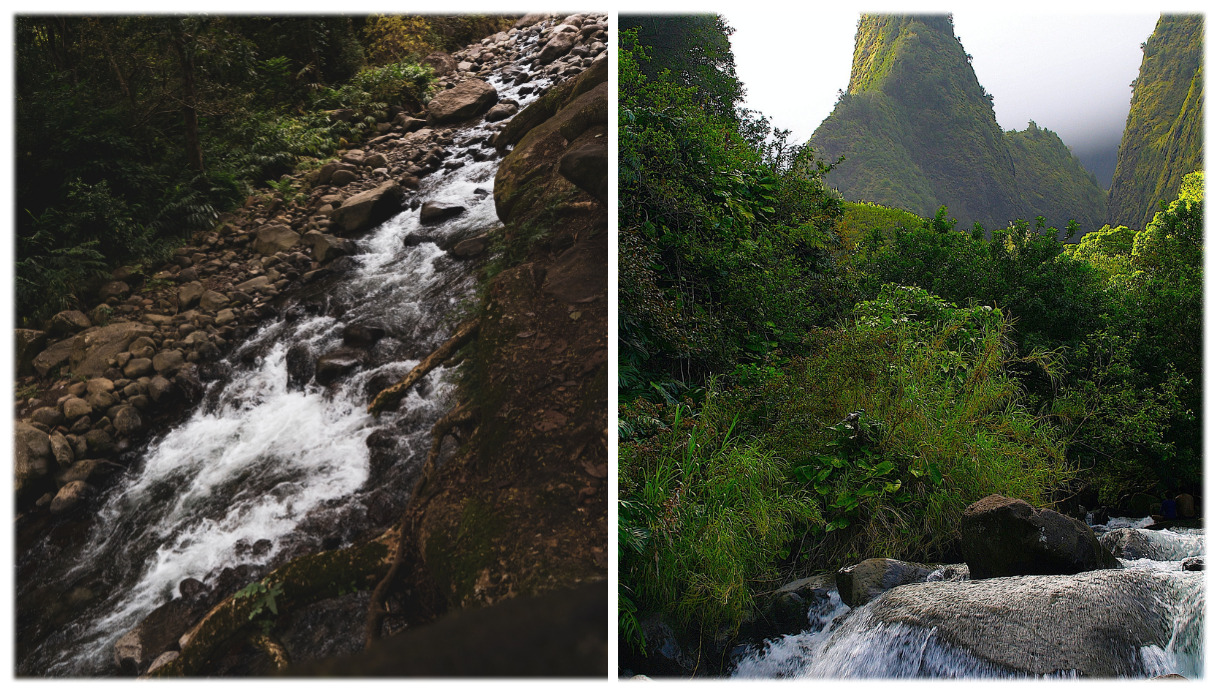 Another layer of appreciating the valley is the great sightseeing spot she is. Many visitors come there because it is home to the dramatic ʻĪao needle, known as Kuka’emoku in ancient times.

The Needle, or Kuka’emoku, is an erosional remnant at the end of a ridge comprised of a denser dike stone. Streams and waterfalls eroded the softer rock around the dike stone and left this 1,200 feet (370 m) high stone needle. It is so unusual that it can be seen on calendars and postcards! 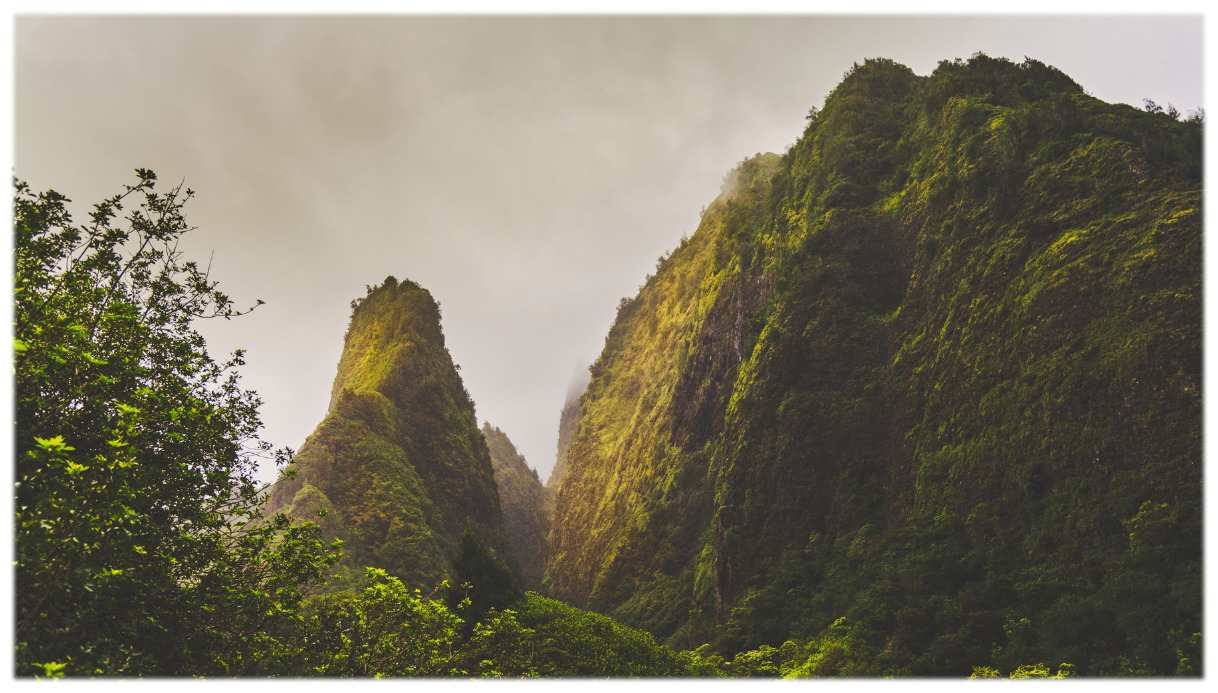 The ʻĪao needle isn’t just an impossibly high, pointed rock formation. It’s also the site of significant historical moments in Hawaiian history. The entire valley, including the needle, was declared kapu* by Kaka’e* in the late 1400s.

It was kapu, designated as a burial area for the Ali’i*.

The legends clearly state the existence of many former Ali’i’s bones being hidden in secret caves back in the valley.

The Needle’s peak is steep and crumbly and not very forgiving. So climbing the actual Needle is something we discourage. Not only will you trespass on private land, but you may also be risking your life. And it is a sacred spot. With each climb, more of the needle is worn away. 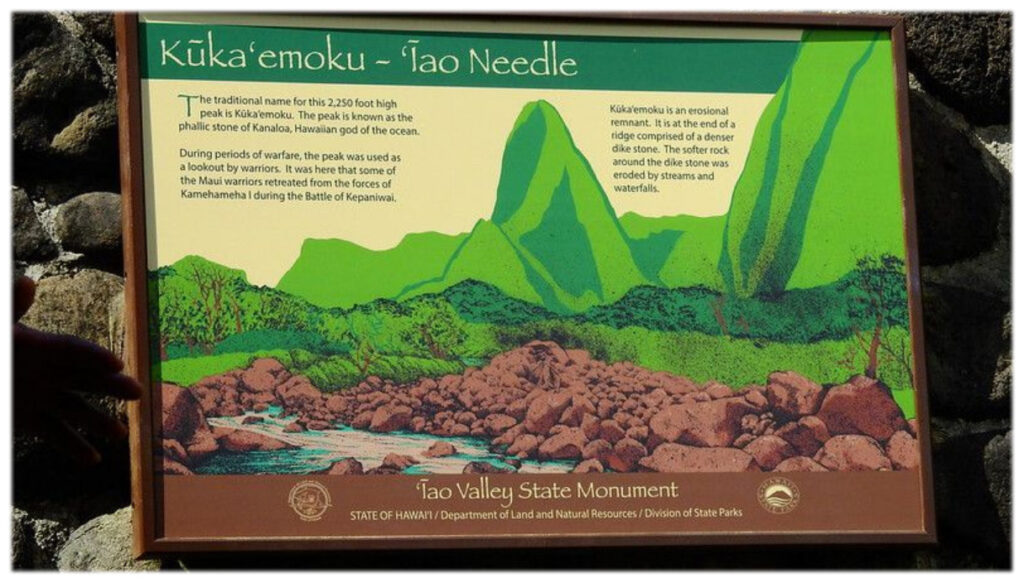 For the ancient Hawaiians who did actually climb to the top of Kuka’emoku, they found a plateau on top. This tiny spot was an indispensable lookout and a natural altar to Kanaloa, the Hawaiian god of the ocean and long sea voyages.

The Needle is known as the phallic stone of Kanaloa.

The lookout advantage of Kuka’emoku cannot be understated. Since the Wailuku ahupua’a* was so blessed with abundant water and fertile soil, it became a prosperous area. It was an important center for commerce and political power, an attractive target for ambitious Chiefs looking to expand their holdings.

Many Ali’i coming of age would try their hand at challenging and conquering the area. It’s no secret that there were many brutal battles fought in ancient Hawai’i, right up to the late 1800s. The most famous of these was called the Battle of Kepaniwai*, in 1790.

This battle was between Kamehameha the Great and the son of the Maui King, Kalanikupule. 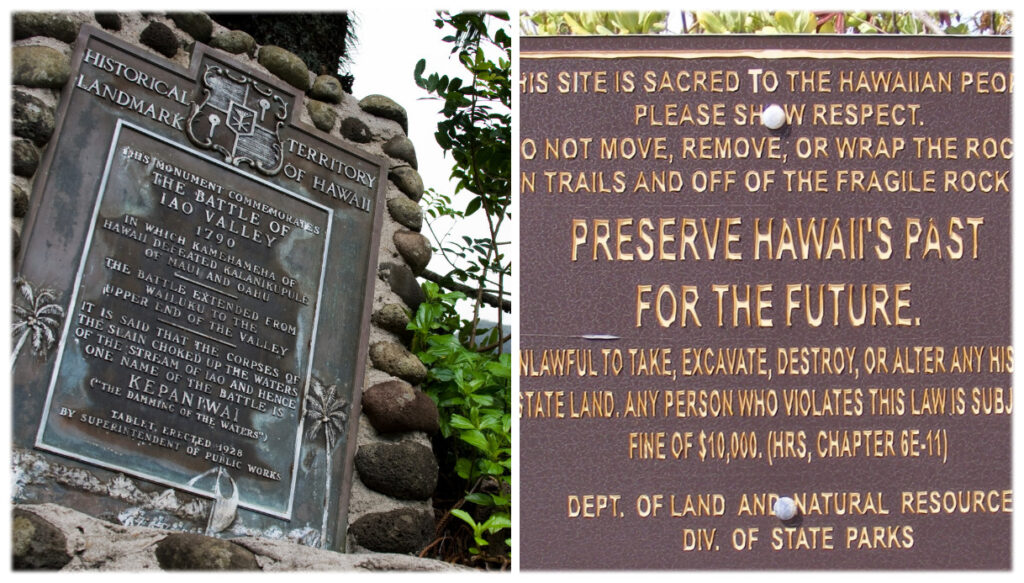 Kamehameha was on a quest to unify and rule the islands in 1790. Kalanikupule’s father, Kahekili, was over on the island of ‘Oahu at the time of the battle, an island he also ruled when the war was held.

When Kalanikupule decided to use the Needle as a hiding place, he did not know that he faced the powerful western weapons, including guns and cannons, which Kamehameha used to kill many of the defending forces.

The Battle of Kepaniwai was one of the best-known and largest battles ever held on Hawaiian soil.

Because so many warriors were slain that day, the river was dammed up by the fallen bodies. Kamehameha did go on to unite the Hawaiian Islands under one rule, but only after the great Maui King Kahekili had died and could no longer defend his kingdom of Maui, ‘Oahu, Lana’i, Moloka’i, and Kaho’olawe.

Many stories and legends come from such a significant place as ʻĪao Valley. Not all of them are gruesome battles.

One legend has to do with love.

This legend is about the powerful god, Maui, and his beautiful daughter. He planned to have the most powerful King in Hawai’i be her husband. So, it is understandable that he was enraged when he found his daughter had fallen in love with Puuokamoa*.

Maui would have slain the audacious Puuokamoa, but his daughter pleaded with him.

After seeing her tears, Maui compromised. He told her he could not let her marry the Merman god, but he would let her see him forever. And with that, he turned Puuokamoa into stone. Many people know this stone as Kuka’emoku, the ʻĪao needle!

Once you have gone up the trail to observe the ‘Iao Needle and the fantastic panorama from there, you can continue hiking. There are many sweet spots along the stream if you have the right shoes. You will see evidence of the old days when people lived in the narrow valley. You can find stands of banana trees growing and many beautiful flowering trees and bushes. 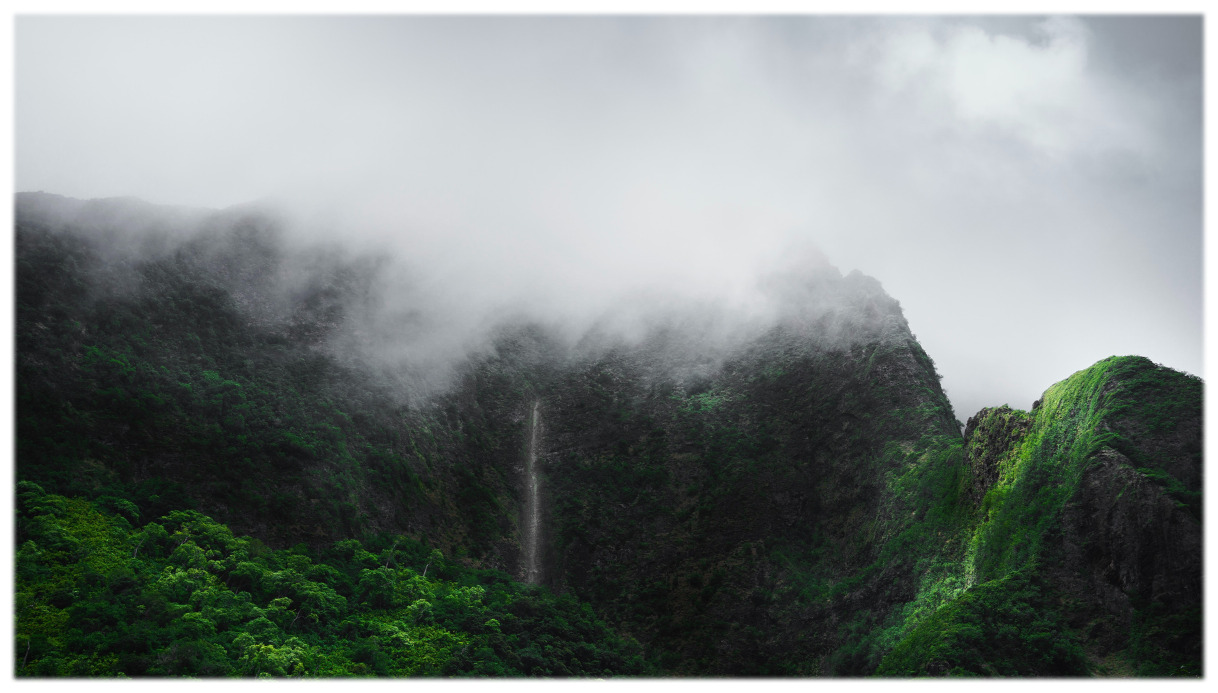 The valley is home to an abundance of plants sacred to the Hula. [link sacred plant] So, you may see members of a hālau hula* gathering the sacred plants to be used in a Hula ceremony. [link hula].

Further evidence of the immense religious significance of the sacred ʻĪao Valley are two heiau* which exists at the mouth of the ‘Iao Stream, the Haleki’i* and Pihanakalani* Heiau. These heiau are well preserved and marked by signage erected by the State. 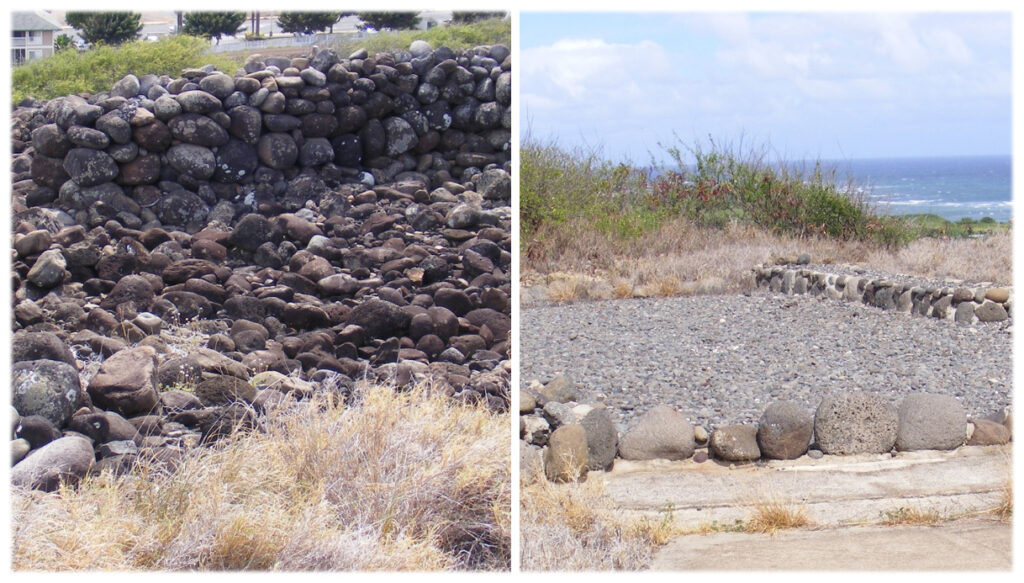 It is believed that Haleki’i was a heiau of Ali’i, with images of ki’i* placed on the terraces. Kahekili, the chief of Maui at the time, worshiped at Haieki’i during religious observances in the 1760s.

Pihanakaiani is recorded as a luakini heiau. Luakini heiau were dedicated to Ku, the god of war, and were built for success and victory. And as we have been told, Kahekili was second only to Kamehameha the Great in the art of war.

Having taken the full tour of ʻĪao Valley – some of her history, legends, and larger-than-life Kings and gods – I hope we leave you with a spark of curiosity to visit this powerful, sacred place.

You can feel it the moment you put your feet on the valley floor. The immense history, the epic love stories, lives lived amidst prosperity and abundance. All of this you will feel or sense as you stroll beside the flowing river or climb the rock walls of the ancient cinder cone which built the valley.

As you enter the valley, just whisper one word, Aloha…

…to greet the powerful spirits and ancestors who still inhabit this place. Listen, they will whisper Aloha back to you and, e komo mai –  welcome, come in.

Ahupua’a – land division from the mountain to the sea

Battle of Kepaniwai – the damming of the waters

Kapu – code of conduct of laws and regulations for everyday life or sacred, holy, forbidden, and off-limits