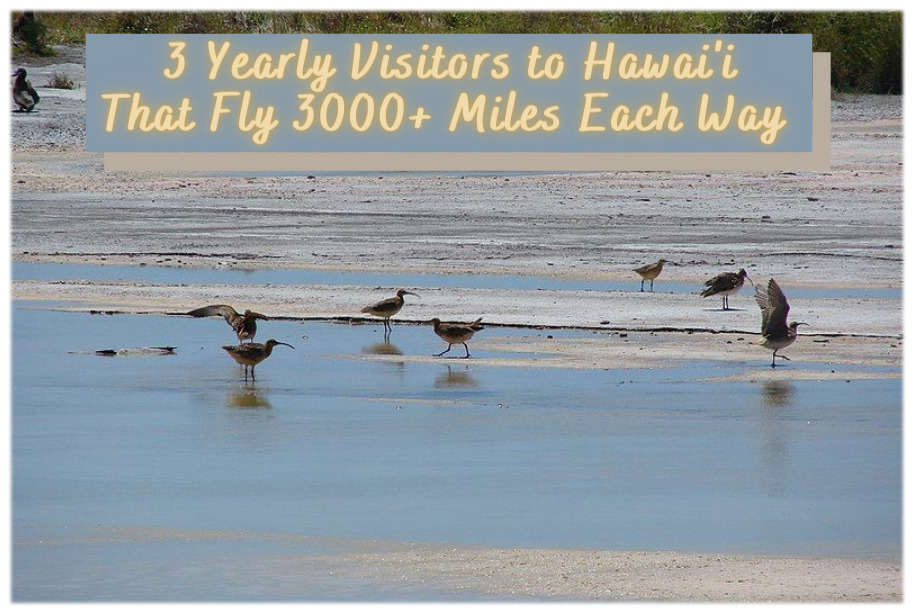 The Hawaiian Islands have many visitors who come every year.

Some use their wings to fly here while others swim. The North Pacific Humpback Whales have one of the longest annual migrations of any animal, swimming between the food-rich Alaskan waters and the warmer breeding waters of Hawai’i.

We eagerly listen for their calls in September when they return. The joy you feel when you hear your Plover’s returning sunset call is palpable. I don’t think I have missed a single year hearing those first evening calls as they fly back to the seashore after a day of feeding in our mowed backyard.

We live at 3,300 feet up Haleakalā, where it is quiet, so it is easy to hear when our Plover returns. When they return to their territory upcountry, they make a particular sound of happiness. So, it is a happy day.

The Pacific Golden Plover was named Kōlea by ancient Hawaiians.

Kōlea is a migratory shorebird that breeds and raises babies from May through July in Alaska. The tundra provides insects, berries, and an effective camouflage to avoid predators during this breeding season. They arrive at their northern summer home during late snow melts when the ground is still frozen. After their 3000-mile flight north, they feast on last year’s freeze-dried berries. Soon after, food is plentiful, with insects hatching and new berries available.

They fly three thousand miles in about three days.

When Kōlea leaves Hawai’i, they are about 7 ounces, which is half that when they arrive in Alaska.

They are ground nesters, and the males build camouflaged nests of lichen and moss. The female will then choose the nest and the mate she prefers. After the mating ceremony, she will lay 4 eggs. The eggs are speckled and blend right in with the nest on the ground. 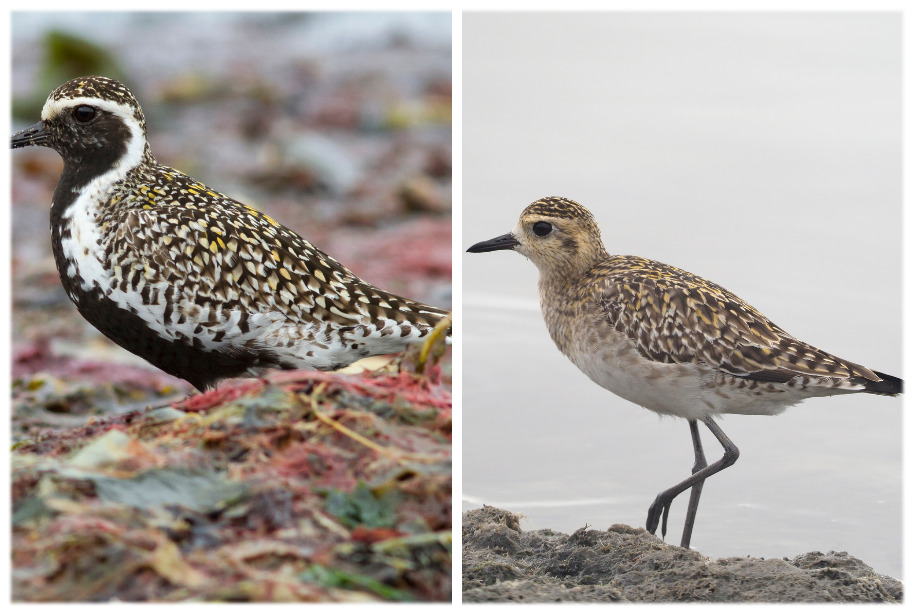 The male Kōlea dons a beautiful springtime tuxedo of breeding plumage as he prepares for his journey north. Like most birds, the males have to impress the ladies!

Both parents take turns incubating the eggs. When the chicks hatch, they, the chicks, must start feeding themselves on their very first day. From birth, the only care the chicks receive from their parents is guarding them against the cold or predators.

What happens when they return to Hawai’i?

Although they are a shorebird, when Kōlea returns to Hawai’i, they head straight back to their inland feeding territory from the previous year. Then, they head back to the shore in the evening before sunset. The next day repeats. You can hear them arrive early in the morning. You may have the same Kōlea come to your yard for 20 years. Thus, the excitement every September when Your Plover returns.

Kōlea has adapted remarkably well to humans’ presence. Kōlea will return to the same place once they have established their inland territory, including backyards, parks, cemeteries, rooftops, pastures, and golf courses. Lucky for us, our backyard has had a Kōlea living there every year since we moved in!

Because each Kōlea returns to the same place each year, it will defend its territory yearly.

This makes it easy to observe the comings and goings of their migration. We may name them, and I have even heard of some birds becoming tame around the people who share their territory by having a house next to their yard.

What about the chicks, you ask? They are on their own once they make it back to Hawai’i. They have to find their own territory. I have seen a tussle or two when a newcomer Kōlea has come to try to move in on our Plover. No way! You go find your own!

The oldest Kōlea recorded lived to be at least 21 years old from the time of banding.

Kōlea often gathers in flocks a few days before they leave to fly north. They can fly from 3,000 to 16,000 feet high.

If you ever see birds that have not gone off for the summer, it will usually be a one-year-old, older, or an injured bird. Sometimes, they stayed behind when they did not get plump enough to make the trip.

Because well over 1000 Kōlea return to Hawai’i annually, they are numerous among the residential areas and get a lot of attention. But, they are not the only bird that migrates to Hawai’i.

The Bristle-thighed Curlew has a similar migration pattern between Hawai’i and Alaska. 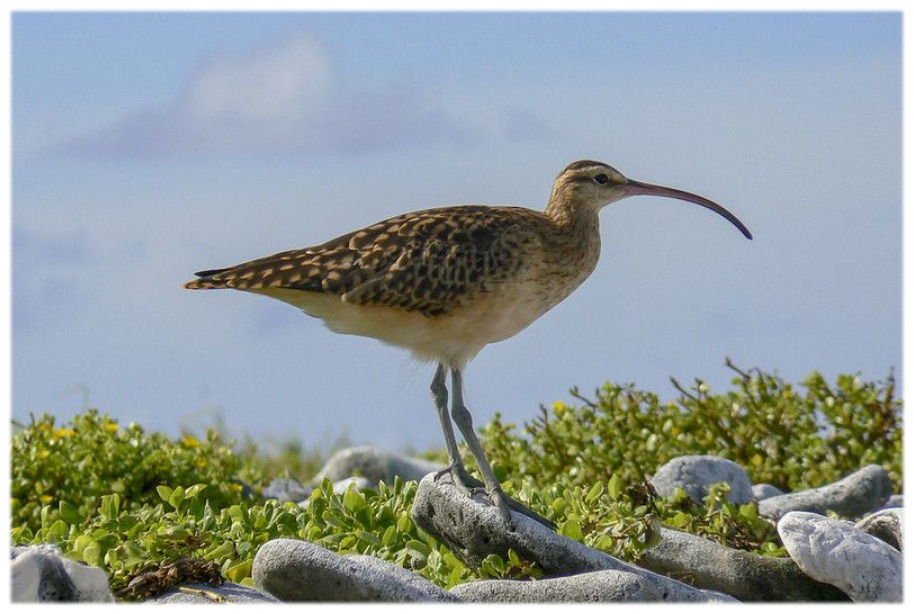 The Bristle-thighed Curlew was named Kioea by the Hawaiian people. There are a few areas on each main Hawaiian island that they return to, but the majority come back to the Midway Atoll National Wildlife Refuge, 1000 miles from the main islands.

Other birds go to different parts of Polynesia, the Marshall Islands, and the Cook Islands.

Generally, they have similar nesting habits as the Plover, including a brood of 4 eggs. But the female’s behavior is not known when it comes to choosing the nest and mate as the Kōlea does. 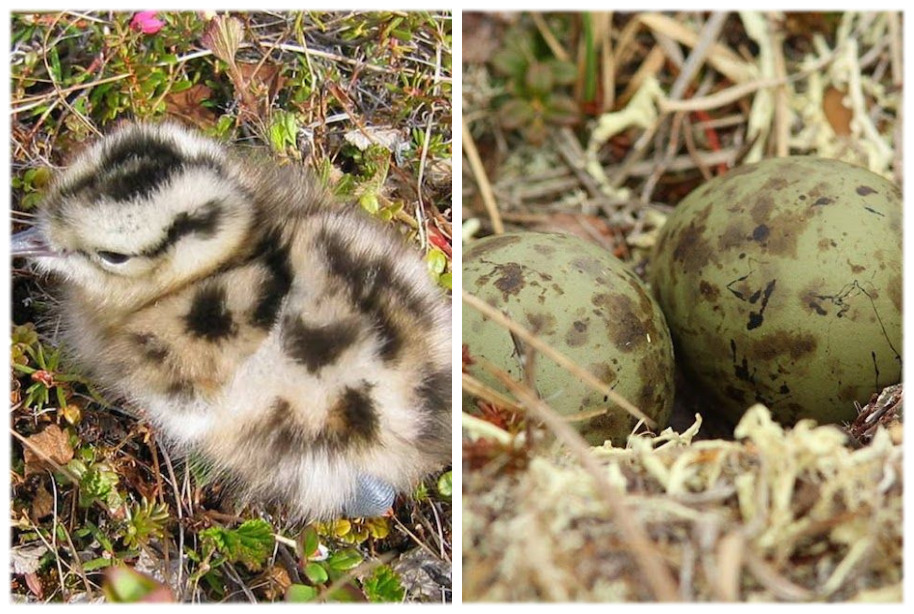 Kioea prefers migrating with the flocks of other birds, particularly Kōlea. They have been observed flying with groups of migrating plovers for aerodynamic advantage and protection from predators from the big flock. Kōlea doesn’t seem to mind having the larger Kioea, who can be a benefit because of their exceptional navigation skills.

Sanderlings’ Hawaiian name is Hunakai, translating to seafoam. You can see these small, graceful birds dancing along the wet sand above the beach water line, searching for sand crabs, insects, and marine worms.

Hunakai is one of the smallest seabirds. 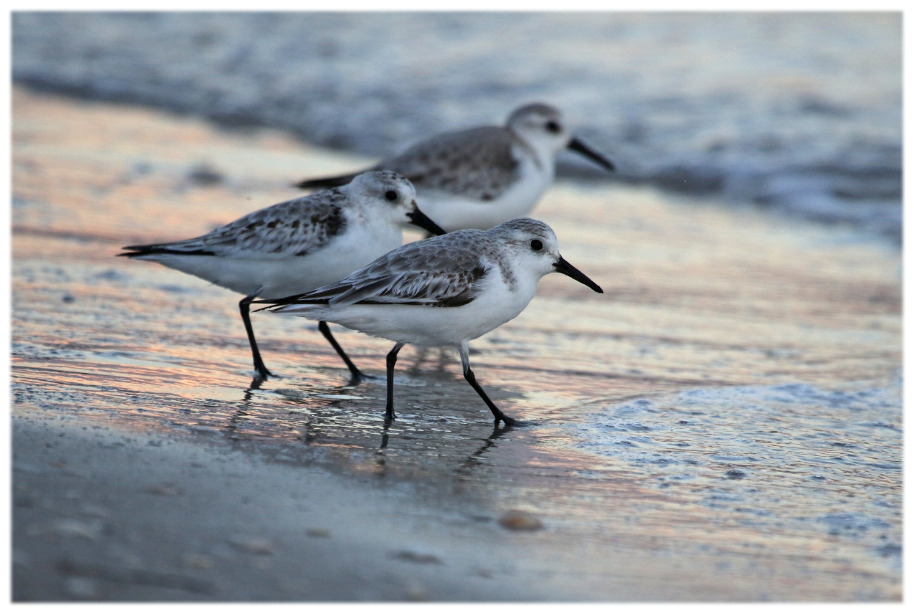 Hunakai makes the trek to the Arctic and back, weighing in at 2 ounces. They nest in rocky areas near the water just as long as there are enough isopods or amphipods to feed the family.

You must visit the beach near sunset and watch these lovely light-footed birds dance along the seafoam for their meal. Closer to sunset, they become luminescent in the beautiful light of Maui’s setting sun.

If you are a birder, there are many more Native Birds to discover.

People often ask, “How did the Polynesians KNOW to keep traveling north until they came to discover the Hawaiian Islands?” We have briefly discussed some theories regarding this when discussing Hawaiian open-ocean navigation and Hōkūle’a.

This article about the migrating birds of Hawai’i brings back the subject of how Hawai’i was initially discovered. Some researchers feel that the early Polynesian explorers got the idea of lands further north by watching the annual migrations of the Pacific Golden Plover and Bristle-Thighed Curlew.

During these annual migrations, the Polynesians leaving Tahiti or the Marquesas Islands, where the early Hawaiians are believed to have originated, could have followed these birds as they flew up north towards the island nation of Kiribati and onwards to the Hawaiian Islands.

There is so much that we owe to these beautiful and incredible birds!

Photos by permission, paid for, or free sources unless otherwise noted.

Curlew Chick and Eggs and Title Image | © CC By 2.0 Forest and Kim Starr