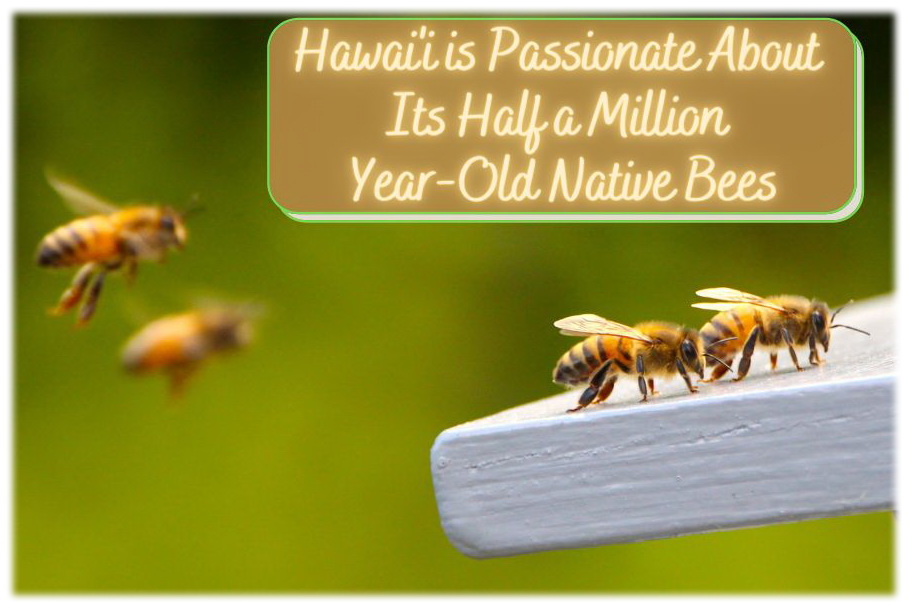 Upon arrival to Hawai’i, it is easy to feel that our island chain is the most remote archipelago in the world. It takes a long time to fly here from anywhere. Along with this distinguishing fact of geographic isolation, many wonder, how was it possible for the miracle of life to first find its way to these barren volcanic islands?

There are a few accepted theories on how this remote archipelago became colonized by plants and animals. It is usually based on the idea that plant seeds and spores, animals, and insects, first arrived here by: 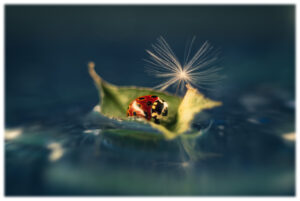 Of the many creatures who found their way to these islands, the native Hawaiian Hylaeus Honey Bee is one of the most amazing to have migrated here nearly half a million years ago.

Can a bee really fly 2,500 miles? Did a chunk of a beehive somehow float here, with the bees surviving on their stored honey? However the bees first arrived, research has shown they were most likely ground nesters, like many of Hawaii’s Native Birds.

As the millennia flew by, a wide variety of native bee species developed from these first immigrant bees. These genetic developments and adaptations were due to the many diverse ecological niches the bees could adapt to.

Some of the different environments which the newly arrived bees found adaptations to were coastal and dry forested areas, mid-elevation forests, dry shrub-land areas, and wetter rain forest areas.

The survival of the native Hawaiian bees depended upon particular native flowers and plants.  Their ability to adapt, and therefore depend, upon these native plants made them very vulnerable should something threaten the existence of these plants.

As people arrived over the centuries, settlers began to change the landscape to suit their own needs. The result was native plants that many indigenous species depend on began to dwindle.

Many of these dwindling endemic species were birds and bees.

Finally, after observing the alarming loss of native habitat and native bees, the U.S. Fish and Wildlife Service listed certain Native Hawaiian Bees as an Endangered Species in 2017. They declared seven species of the Hawaiian yellow-faced bees as endangered. 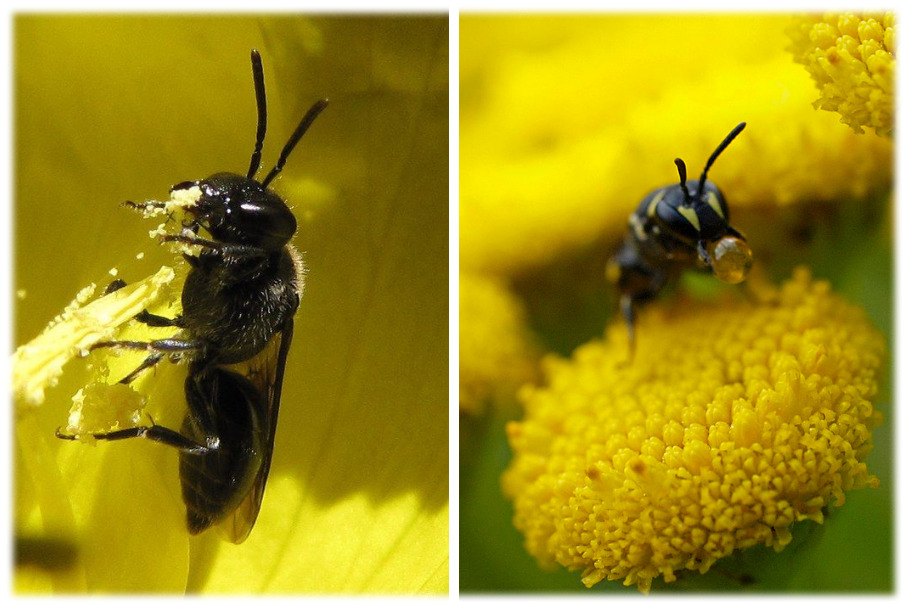 The yellow-faced bees—from the genus Hylaeus—are the only bees that ever naturally colonized Hawai’i.

Why is there such a fuss over one tiny insect? Because, many native florae would not be pollinated by any other insects or non-native bees and would therefore become extinct.

Hawaiian bees prefer the tiny flowerets found on some native plants. A few of their favorite flowerets are on the Hawaiian sandalwood called ‘iliahi and also, on the ‘olapa, and ‘akoko plants. 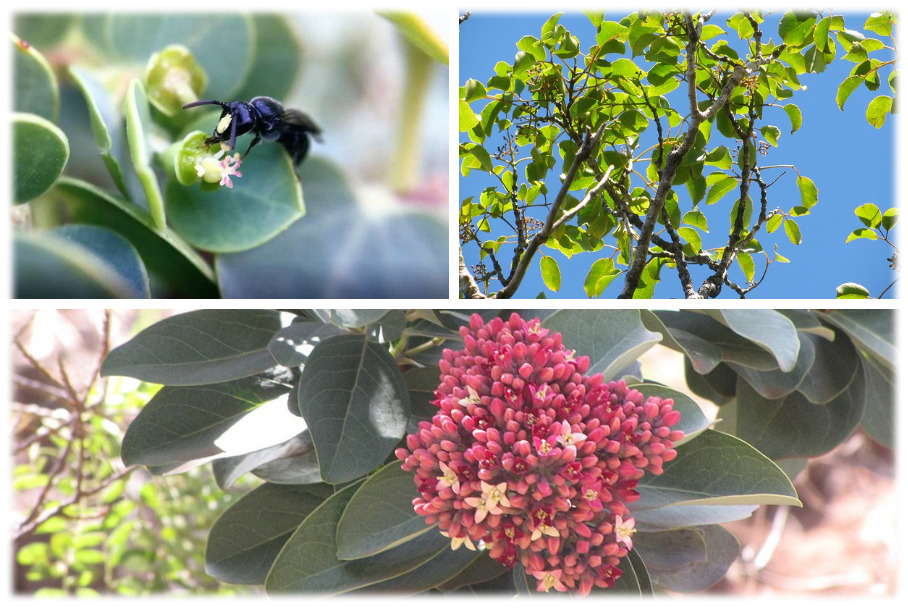 “They love ‘akoko,” says Karl Magnacca, who has done bee research for several decades. “They swarm all over it.”

A nineteenth-century British entomologist called Hawaiian Hylaeus  “the most ubiquitous of any Hawaiian insects.” But as the pollen from their favorite plants are disappearing, so are the bees.

The good news? We can all help reverse this trend by replanting native shrubs and trees in Hawai’i. Visit our blog about reforestation HERE to find out how.

Even though the several dozen species which evolved from the Native Hawaiian Hylaeus bee have struggled to survive in Hawai’i, non-native honey bees are doing quite well in Hawai’i. These common honey bees originated in Eurasia and quickly spread across Europe, Africa, and beyond.

In Hawai’i, European Honeybees can make two seasons of honey if you’re lucky enough to harvest it before they swarm and take it with them. 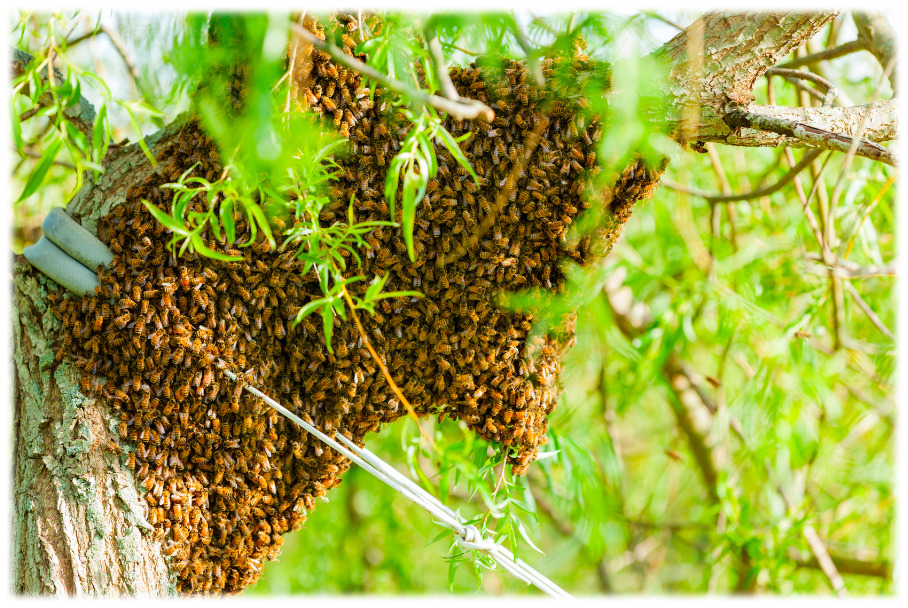 A good beekeeper can collect an average of 100 pounds per hive.

Beehive boxes are placed near macadamia, Christmas berry, ‘ohi’a lehua, and kiawe trees in the islands.

The flowers from these trees produce unique and sought-after kinds of honey.

Hawaiian honey has been marketed well and commands the highest prices found in the U.S. You can pay up to $40 per pound. Even so, it’s not a real moneymaker. It’s more of a side-income hobby.

Like Mark and Leah Damon of Maui Bees in Kula, most beekeepers produce honey for themselves and a group of local, devoted customers. 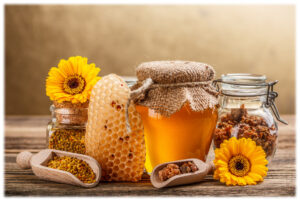 However, there is a way to make an income and do what you love as a beekeeper.  The real cash comes from producing queens and renting hives out for pollination of crops.

The State of Hawai‘i produces and exports the most queen bees in the world.

Three major producers on the Big Island raise hundreds of thousands of queens a year. They supply between 25 and 50 percent of the queens purchased by the U.S. Mainland and Canadian beekeepers. Pollination services in Hawai‘i are valued at $200 million per year. 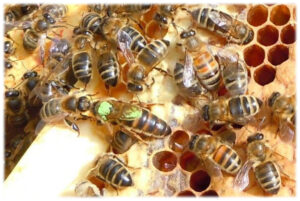 For those who are interested in learning more about bees when you visit Maui, you can stop by Maui Bees when you visit Upcountry. They have hands-on beekeeping classes, with all the gear you need, for adults and special learning experiences for children of all ages over 3.

We have seen Mark in action. He has such a relaxed connection and bond with honeybees. He rarely wears any protective gear, and he rarely gets stung. He moves in complete harmony with the bees.

Mark says, “It’s a meditation. The vibration of bees is so high that it is like being in a higher and evolved presence. It rubs off on you.”

He also says that “Bees are actually wild animals. Wild animals don’t look to you for sustenance. They make decisions based on natural laws. So you have to get into this strange, wild consciousness and work naturally with them.“

Danielle Downey is Hawaii’s state apiary expert, recently hired to help the bee industry flourish. She says that Hawai’i is a very bee-friendly place. She agrees with Mark Damon, “Keeping bees will change the way you see the world. You can’t help it: you see plants and flowers differently; you notice weather patterns on behalf of your bees. It’s a new way to see the world.”

Working with bees, being around them, observing their comings and goings from their hive is just so fascinating! Then, when you finally get to open up the hive or stand in front of a glass-enclosed hive, you can see the inner world of bees.

Their home is a super busy place with bees coming and going from first to last light.

Bringing in nectar for honey, pollen for protein, water for cooling and drinking, laying eggs, feeding the queen and her babies. it goes on non-stop until it’s completely dark, and the bees stop and rest for a few hours.

If you want a look into the beautiful world of bees, we highly recommend you check out some classes, or drop by Maui Bees for a visit with Mark and Leah. They love sharing the special world of honey bees! You will be glad you did!  You will talk about the wonders of bees for years afterward!