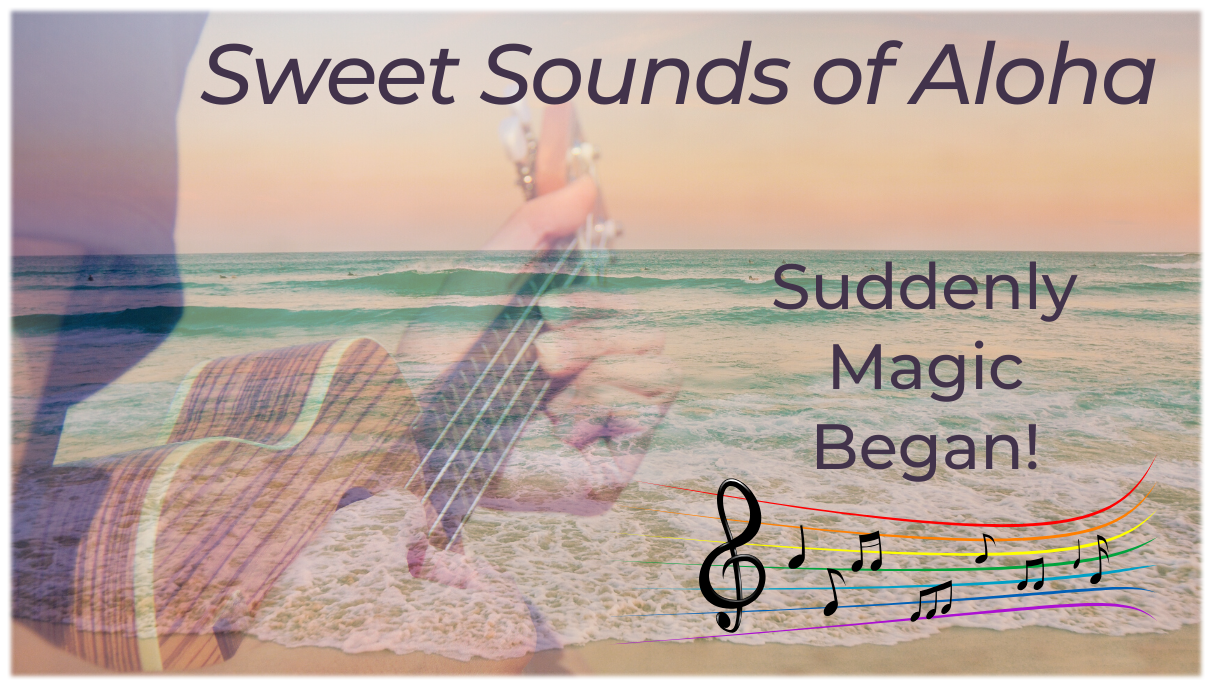 Hawaiian music is every bit as indigenous and aboriginal to the island chain as the crashing surf and thunderous volcanoes. Each part of our globe has its own unique landscape. This tends to shape its culture; be it music, art, food, dance or any creative expression.

So what would people get if they evolved for centuries in a landmass so remote, it might as well be on the planet Saturn? A land so beautiful it takes your breath away AND it can provide everything you need to survive and thrive?

What is Hawaiian Music?

This question has been asked repeatedly since the 1920s. There is no simple answer! And yet, we can recognize it the moment we hear it! The distinct sounds of the sweet falsettos, the harmonies, the strumming of the ukulele and the languid steel guitar.  Of course, the added spice of the words sung ‘Ōlelo Hawai’i*.

We begin answering the question through understanding the origins of the music.

Like all art forms, it evolved for hundreds of years. Initially, there was oli* and then, later on, once the Protestant Missionaries introduced European musical elements such as the Octave, came mele*. During this transition of the oli evolving into the mele, the authentic use and meaning of the Hawaiian language became the foremost consideration. The Hawaiians knew that without the proper use of their native language, the language and culture would be slowly obliterated and would lose all relevance. Most of all, the loss of its subtle nuances and hidden meanings.

Therefore, a system was developed during the transition from chanting oli into singing mele. To formalize the authenticity of songs which wanted to be considered Hawaiian, consulting language texts and with kupuna* was necessary.

The wisdom and ancient knowledge from those who grew up speaking, chanting and later singing Hawaiian music would help in the creation of the “new” music and therefore ensure it was truly music representing the Hawaiian experience and culture.The beauty of this early emphasis on staying true to the native tongue means that the music we hear today and that is composed today, still carries the laughter and tears of Hawaiians from centuries past. Of course, Hawaiian language is always evolving and the connections to experiences from the past still remain within reach.

A Brief History of Oli

The memory of early Hawaiian literature was recorded in an oral tradition that permeated the islands.

Daily life, love of the land, humor, tragedy, the courageous character of their leaders and reverence to their Gods, all were documented in oli. These stories and more were passed on in this oral history. Oli were created for many reasons – for wisdom, well being and preservation of centuries of Hawaiian lore and experience.

We learned in our Blog about Hula, the traditional music and chants were created solely with percussion instruments and three notes. The eight notes of the octave came later. Even though the musical building blocks of just three notes and percussion seem limiting, it was not. Vocalization was quite complex even with this small repertoire of a three-note scale. The traditional practice of chanting required the chanters to exercise their vocal capacity to hold notes, vibrate, use the head voice, the chest cavity, be sonorous or gentle, and much more. Like certain acapella musical artists today, their voices could create an entire orchestra of variety.

Adding Music and Song, the Mele

European music was a strong influence when hīmeni* were introduced by Protestant missionary choirs. The Hawaiian people were intoxicated with sounds they had never heard before. Melodies and harmonies using the eight notes of the octave and the stringed instruments fascinated the island people. 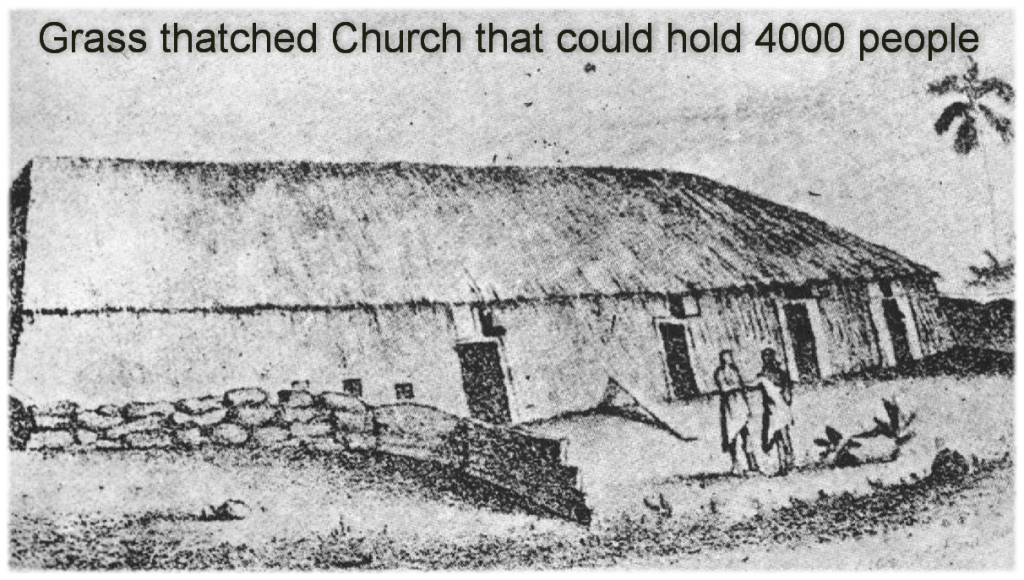 Picture the Hawaiian people treading lightly up to a Protestant church in 1820 to listen to two octaves of musical beauty.  Can you imagine what the outcome was once they combined the European Octave and Harmonies with all their vocal training in the performing of oli? Yes!

Once they started to sing, their music became famous throughout the world.  If you have ever heard Israel Kamakawiwo’ole (Braddah* Iz) or The Brothers Cazimero, then you will know what we are talking about. Most listeners use the word, angelic when describing their voices.

Listen and Watch Bruddah IZ HERE (you may need a tissue)

Composing the mele involved a few steps. Because words have always had so much power in the Hawaiian culture, a lot of work goes into crafting a song, poem or chant. All lyrics are chosen carefully to avoid any unintended manaʻo*. Therefore, avoiding any unintentional consequences. The mele is always checked by kupuna, and quite often by several other people knowledgeable in the subtleties of the language. Generally,  the composer is the only person who knows the secret kaona* of the mele.

Along with the introduction of a written alphabet, the beginning of documentation of Hawaiian music was born. The ability to write down music and words did not happen until the late 1700s. That is when Hawai’i began integrating with numerous styles of music brought by the different immigrant groups who came to work in the islands. 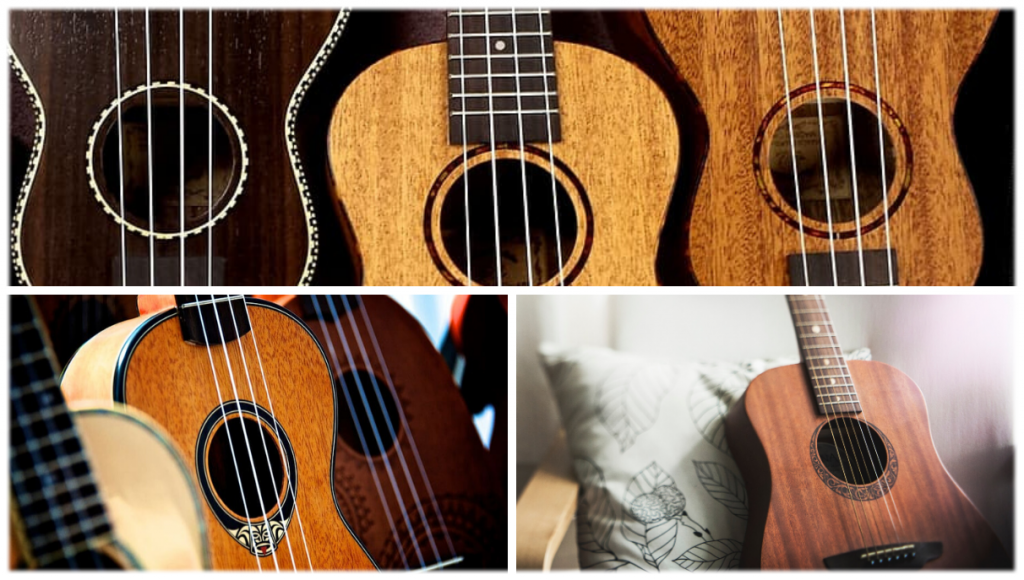 Many years later, in 1878, the Portuguese brought the ‘ukulele*. This changed the sound of the developing Hawaiian music into what most people now recognize worldwide.

In the early 1900s the admiration of mainstream audiences escalated. During this time, much of the music called Hawaiian had influences of Tahitian and Samoan. Especially the music with swift and intricate rhythms.

But, we rush ahead…let’s go back a bit to 1836. This was the first year of the Royal Hawaiian Band. A band with the distinction of being the only Royal Band and oldest full-time municipal band in the United States. They still play weekly on the grounds of Iolani Palace* or Kapiolani Park. 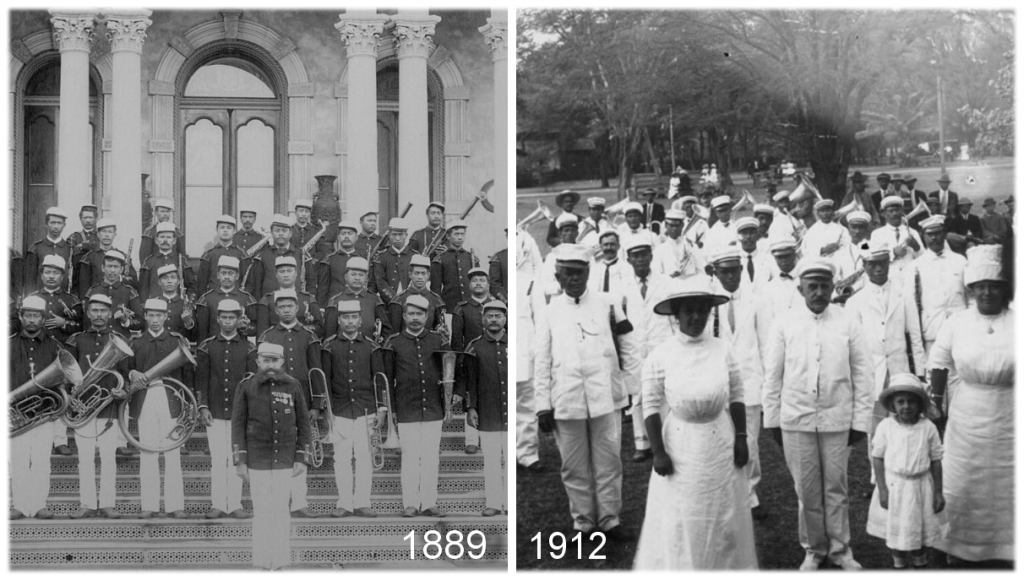 The Band was founded by King Kamehameha III, with the mission of promoting music, preserving Hawaiian musical culture, inspiring young musicians and enriching the lives of the people of Hawai’i. The Hawaiian Monarchy’s fondness of music was manifested in other ways as well. One lasting manifestation was their love and skill at composing music. This music would become a foundation of Hawai’i’s musical tradition. 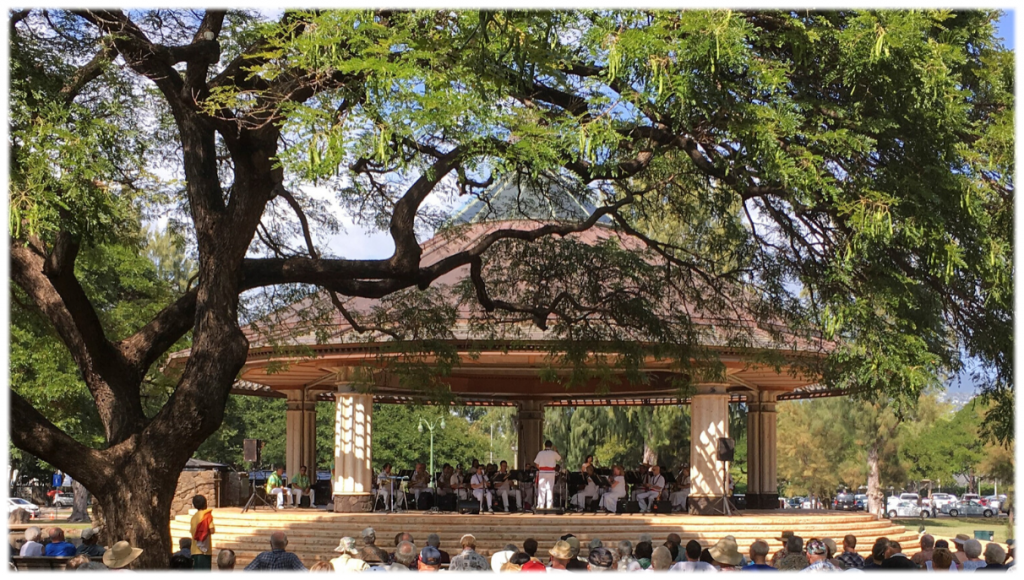 An example is, two musical traditions were created by sitting monarchs. In 1883, The Royal Hawaiian Band played the hit song Aloha ‘Oe in San Francisco, which was written by Queen Lili’uokalani, the last reigning monarch of Hawai’i. Aloha ‘Oe was written originally written as a love song. It become a farewell song to Hawai’i during the overthrow of the monarchy as Hawai’i lost its independence and became part of the USA.  And next was the composition, Hawai’i Pono’ī, originally the national anthem, written by King Kalākaua. Today, it is our state song. Both Queen Lili’uokalani and her brother, King Kalākaua left behind over 200 songs. 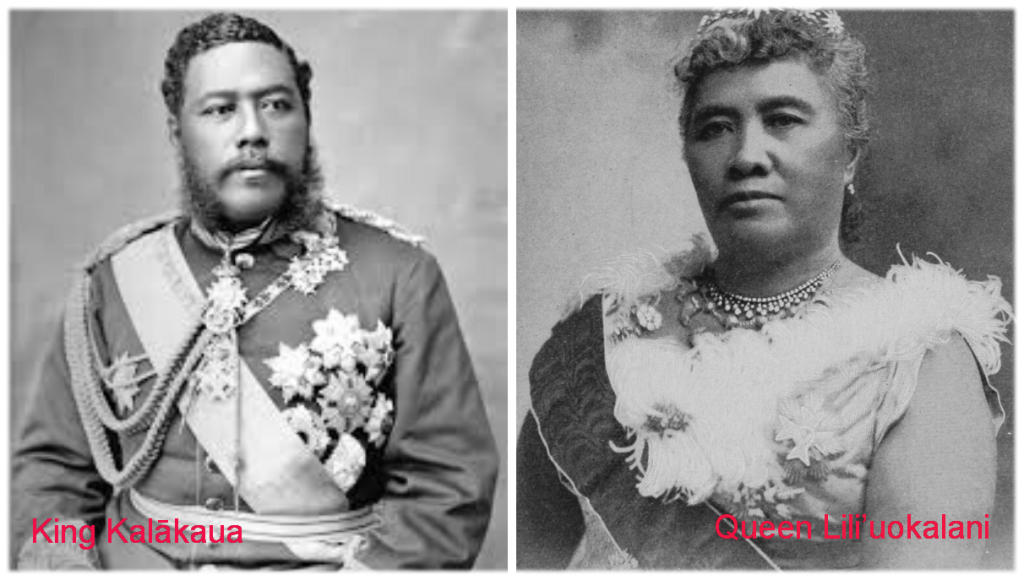 If you have an ‘ukulele, play along ALOHA ‘OE 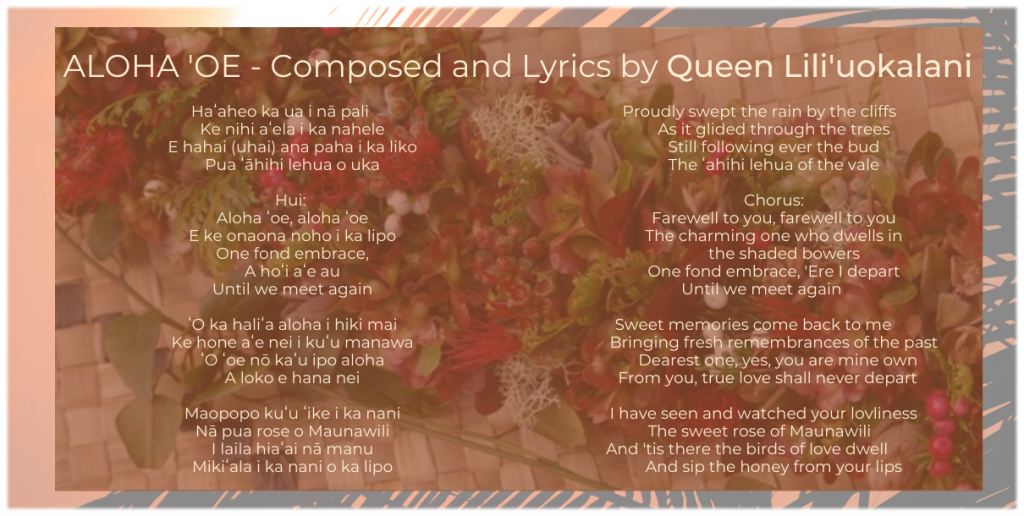 The Golden Age of Hawaiian Music

The Golden Era of Hawaiian music started about 1930 and went to 1960.  Popular styles were adapted for Big Bands and orchestras across the country. Hawaiian performers like John Kameaaloha Almeida, Sol Ho’opi’i and Lani McIntyre traveled to the mainland and became mainstream stars. 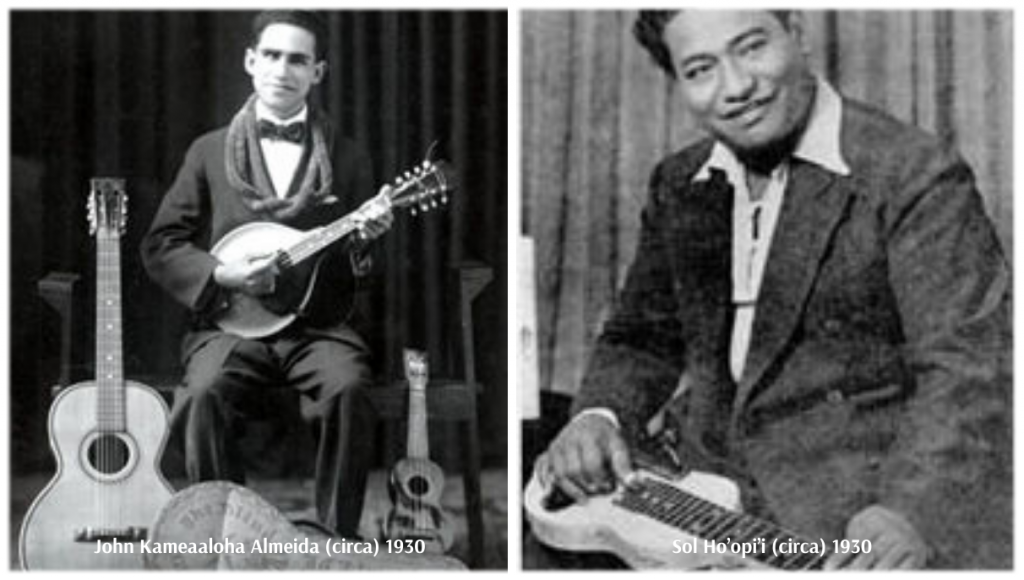 You can see Lani McIntyre and the Aloha Islanders with His Hula Ladies (starting at .55) in the 1940s –  HERE

Like many “home-grown” musical styles, the Golden Age of Hawaiian music could not compete in the 1960’s with the rise of rock, soul and pop acts from the USA and Europe.  Hawaiian music began to decline.

This trend reversed in the 1970s when a re-birth of Hawaiian pride and Hawaiiana began with the first successful voyage of the Hōkūleʻa*. The incredible excitement from the recreation of the original Hawaiian journey to Tahiti, in ocean-going canoes, carried over into a resurgence of all things Hawaiian – the music, the language, the customs and the hula.

Later on, some Hawaiian artists began to re-fashion classic American songs and new styles began to develop, like Jawaiian, AKA Hawaiian Reggae.  The unique Hawaiian style and sound still rang true, even in the cover and new adaptations of genre’s outside of Hawai’i.

This Is What We Know Now

This past century has been a prodigious time and tremendous expansion for Hawaiian music. Even though many musical genres and sounds have a creative arc of growing into wild popularity, only to disappear and become obsolete, that has not been the case for Hawaiian music. Its deep roots in the language and culture give it an almost inexhaustible flexibility. It is allowed to incorporate outside influences, from swing to jazz to rock, without losing its own distinctive personality of Aloha.

Trace its development from the monarchy era to the age of rock ‘n’ roll, and you’re struck by Hawaiian music’s ability to remain relevant to each new generation. It continues to be popularity not only in the Islands but across the globe. It’s possible to argue over what precisely constitutes Hawaiian music, but make no mistake, it is alive and well in 2020.

Haku Mele – one who writes/composes the chant or mele

Iolani Palace – The only Royal Palace in the USA, located in Honolulu

Mele – song, poem, chant (in this blog we refer to song)