Delightful Coconut Palms Swaying on the Glorious Beaches of Hawai’i 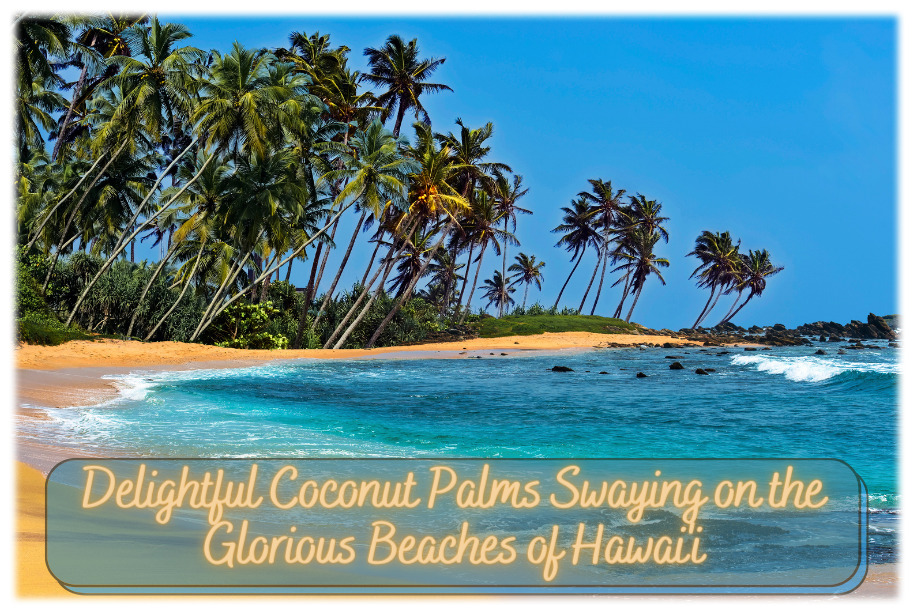 One of the first things people think about when they hear about Hawai’i is swaying coconut palms and beautiful beaches.

It is hard to imagine that at one time, there were no coconut palm trees on the Hawaiian islands at all!

When the Polynesian migrants first arrived, there was only one species of native palm tree on the islands. Today, there are 12 varieties of palms with over 200 sub-species, and all but one are introduced.

Over millions of years, a wide variety of plants, insects, birds, and animals (large and small) made their way to Hawai’i, the most remote landmass on earth. During that incredibly long period, there was only one palm tree seed that found its way to these islands in the middle of the Pacific.

The other palm tree, the admired and iconic coconut palm, was imported as one of the first plants brought by the migrating early Hawaiians. They carried coconuts on their first open ocean, double-hulled canoe voyages.

Consequently, the coconut palm and the other plants they brought earned the name canoe plant.

Canoe Plants were plants that the Polynesian people could not live without. They were crucial to a future life in the new lands. They were so essential that they carried these plants in the limited and precious space on those voyaging canoes.

The two initial palm trees, the native Loulu, and the coconut palm complemented each other in various ways and were both excellent for multiple reasons. The different leaf shapes were helpful, and the trees both grew well together and in similar habitats. In addition, they both produced food, even though the coconut’s flavor was preferred.

Let’s learn about Loulu first. It is the only palm tree native to Hawai’i.

Loulu is pronounced LOW-LOO. The word, Loulu, means umbrella. Because of the large unique shape of the fronds, one of its uses is providing protection from the rain or the hot sun. 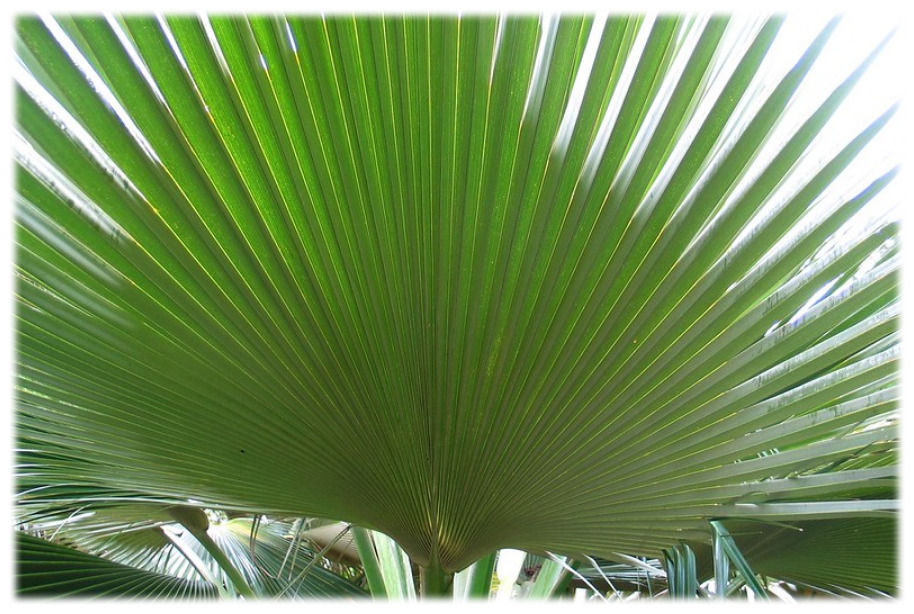 When the Polynesians arrived, the Loulu was prolific in Hawai’i. It grew in thick swaying forests and was as abundant as the native grasses. This is primarily due to its character trait of profuse self-propagation. As a result, Loulu was the only palm that grew in Hawai’i for millions of years. In fact, this genus was so successful and widespread across all of the islands that it evolved over time to include two dozen different species.

These palms are unique to Hawai’i and are now incredibly rare. In 2014 there were only 50 trees remaining in Hawaiian forests. Restoration and seed conservation has changed their fate for the better in recent years. However, due to introduced animals, it is still rare to see many – if any – seedlings sprouting below a mother plant in the forest. This photo is from an area of preservation. 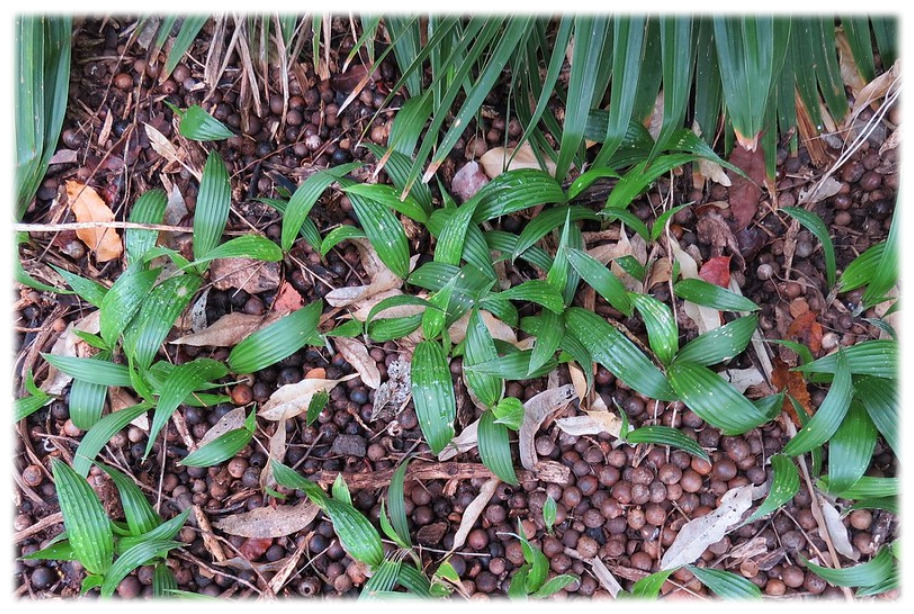 The main reason the Loulu palms have disappeared at such an alarming rate is that their ability to propagate was drastically curtailed by the introduction of many species of rats, pigs, goats, and other plants.

The introduced animals would eat the seeds, trample the new sprouting seedlings, spread diseases, and destroy the palm’s native habitat. Introduced plants would crowd out the loulu palms from propagating. All these things rolled together, pushed the Loulu into near extinction.

In ancient times this dramatic fan palm had many uses other than as an umbrella:

Here is a photo of a 100-year-old Loulu that has been protected alongside one that is being allowed to propagate on its own. 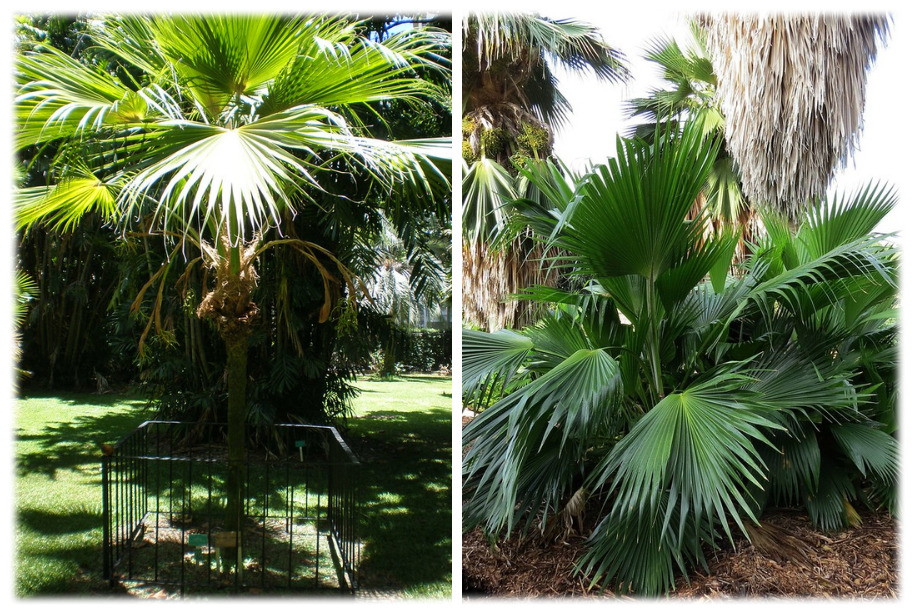 Now it is time to talk about the ubiquitous Coconut Palm tree. Why did the original Polynesians use the precious space on their canoes to bring coconuts to Hawai’i?

The coconut is a big nut with delicious milk, depending on the level of ripeness. Even though the nut is significant, the amount of meat inside is usually relatively small. But coconut milk and meat are superfoods. 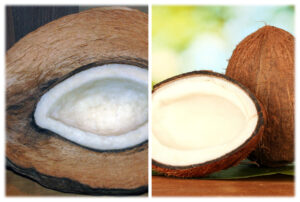 The Coconut Palm is called Niu in Hawaiian and it has also been called the Swiss Army knife of the plant world.

This hard-cased fruit produces high-calorie food and delicious, drinkable water packed with electrolytes. As an essential food for people migrating to the islands, it was a perfect survival tool, like the Swiss Army knife.

Some other uses and benefits of the coconut palm are:

There is an ancient tradition in Hawai’i of planting a coconut tree for every child that is born. A he’e or octopus was placed in the planting hole first. This was to help the trees spread and grow strong, gripping the soil to stand tall even in the heavy winds. 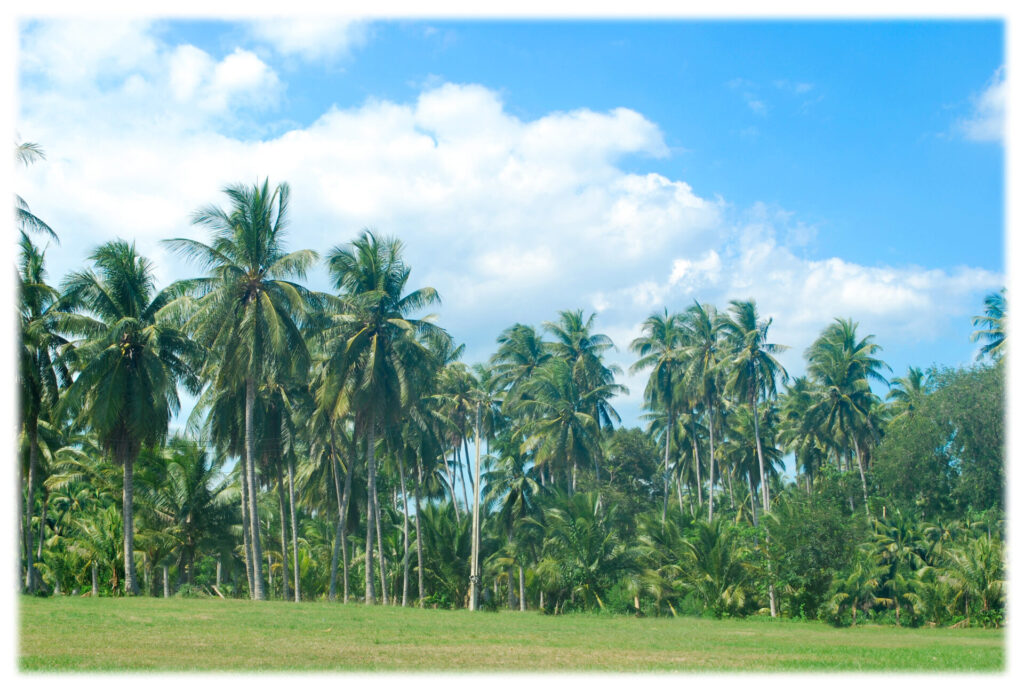 A whole grove of coconuts would be planted when an Ali’i child (child of royalty) was born. So if you come across a field of coconut trees, you can speculate that it was planted for a royal child.

Nowadays, on a typical day, it is not easy to find fresh coconuts on the islands.

Sometimes you will see them in roadside stands on the Road to Hana. Other times, you may find a few in a food store. Other than that, you will only find the husked nut, most likely imported from Thailand. The shortage of fresh coconuts is primarily because there are so few coconut farms on the islands. 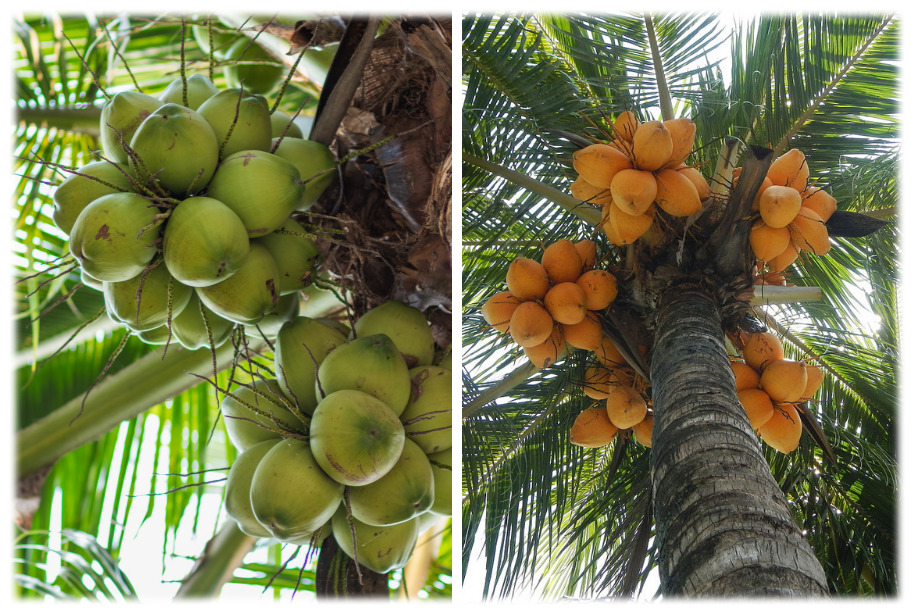 If you or your group want to learn more and have a hands-on experience with fresh coconuts, there is a boutique Coconut Farm on Maui in Lahaina called Punakea Palms. They offer educational tours and coconut tastings. In addition, you will learn how to open a coconut and make coconut milk.

Although coconut oil has been used since 1500 BC, it seems that coconut products’ popularity has grown over the last 20 years. Besides being a great food in many areas, our skin loves it too.

The Loulu and the Coconut Palm are a huge part of the Hawaiian Story.

Once you know what you are looking for, seeing the Loulu palms can bring a feeling of deep appreciation and joy. There is a special feeling in the renewal of this ancient palm. This once prolific and ubiquitous palm is still here and beginning to prosper bringing hope for the future.

The coconut palm is another story – they are iconic to tropical landscapes. The tall trees, loaded with coconuts, are part of the image we have in our minds of Hawai’i. And these trees were one of the reasons the Polynesians were able to successfully settle and thrive on these islands. 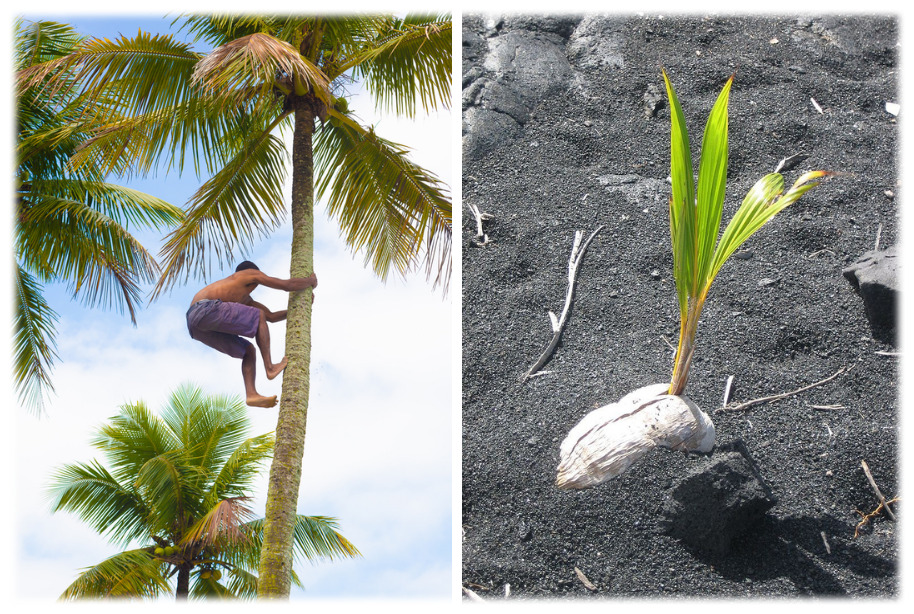 Coconuts were, after all, one of the Canoe Plants. They were essential for the new settlers here. You owe it to yourself to seek them out and drink the fresh coco-water straight from the fresh nut! And then, open it up and eat the delicious meat.

Take a few home to where you are staying, and have the more mature, firm coconut meat in your morning fruit salads. We prefer it when it’s thinly sliced and toasted in the oven! Yum!!! The Hawaiians knew very well what they were doing when they imported these treasures from far away!

Photos courtesy of Wiki Commons and other paid-for or free sources unless otherwise noted.