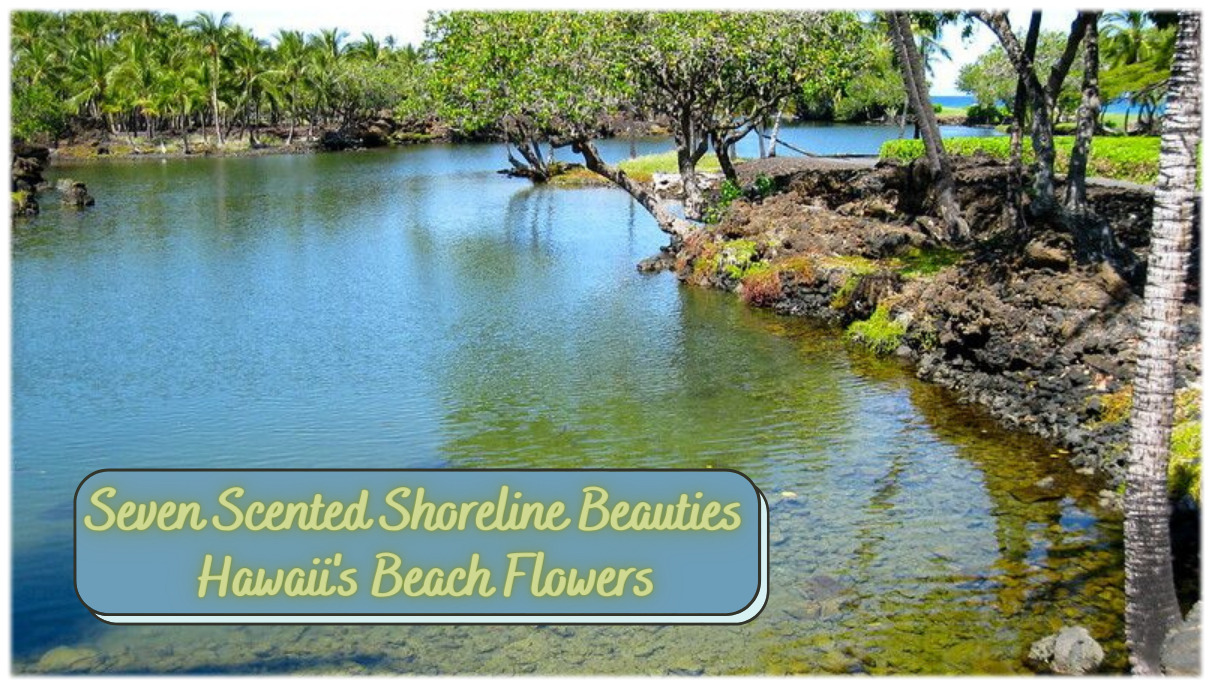 Endemic Hawaiian plants and flowers will typically thrive in their native environments. You do not have to go deep into the Hawaiian rainforests or to the edge of remote cliff faces to find exotic native flora in Hawai’i.

Many beautiful flowering plants live along the beach where you go every day. They flourish in the sand, salty air, brackish water, or even seawater.

A large number of these shoreline beauties’ blooms even have heavenly fragrances. Plus, they have a variety of colors and shapes, as you will see later in this blog.

Having studied Hawaiian ethnobotany and language, I enjoy sharing the Hawaiian plant names. Therefore, I will less frequently share the common plant names.

I’m so excited to share these extraordinary plants and flowers with you, that I want to get started right away.

So, let’s get started viewing and learning a bit about Native Hawaiian Beach Flowers. 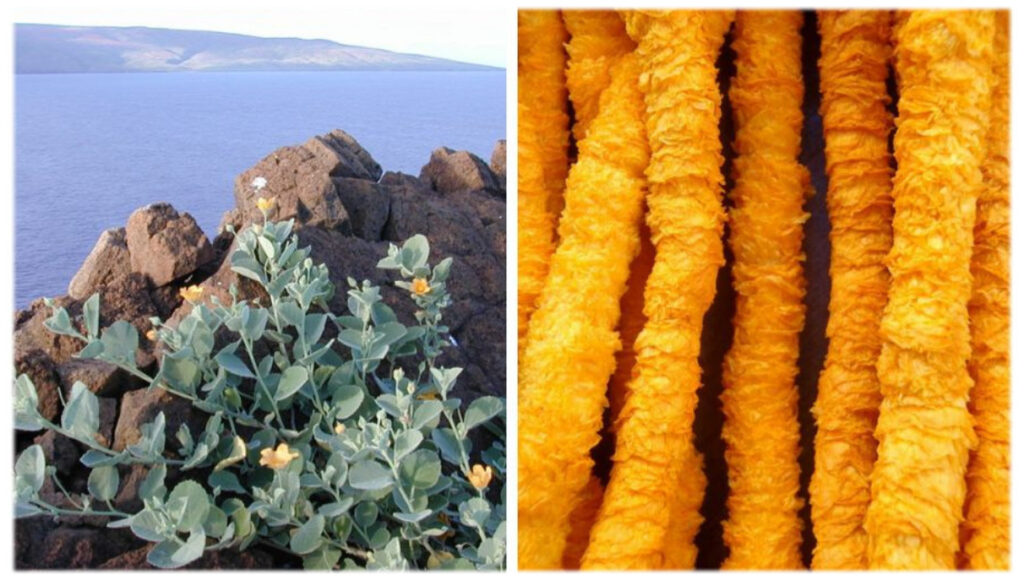 The island flower of ‘Oahu, the ‘ilima, has always been a flower of royalty. Lei makers collect 500 to 800 delicate ‘ilima flowers to make the long and glorious lei worn as a symbol of royalty.  Which is why you often see these glorious lei on statues of Kamehameha the Great on Hawaiian holidays. 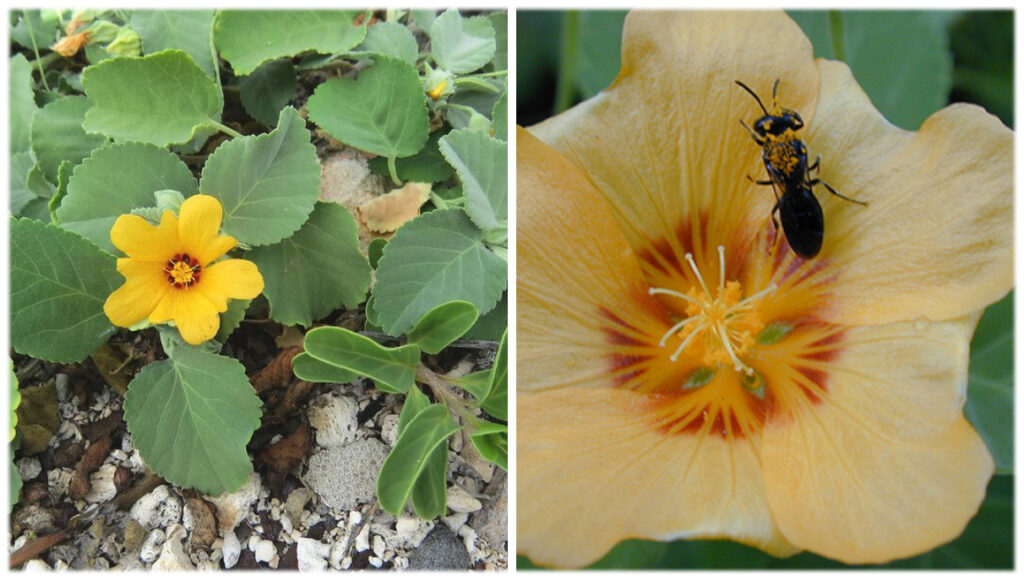 Although there are many different ‘ilima species on the islands, the coastal variety is what we will see today. It is called ‘ilima papa (flat ‘ilima) and grows low and flat. These flowers are edible and have a nice flavor. They are also used as medicine, a subject for another blog.

Side note:  In case you are curious about Native Hawaiian Bees. 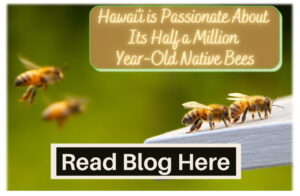 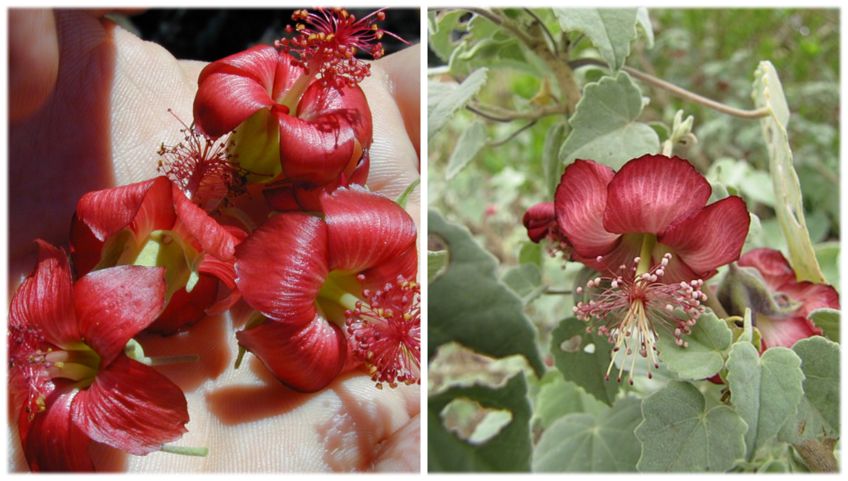 Since this precious, ruby-colored jewel of a flower was put on the endangered species list, it has been a top priority plant to botanists fighting to protect it. They are working hard to prevent its demise. Thankfully, it is now planted in all Native Botanical Gardens in Hawai’i.

The ‘ula in this flower’s name refers to red, yet other colors like pink, yellow, green, and cream-colored flowers have been seen. The blossoms swing, bottom-up, under its heart-shaped silver leaves. 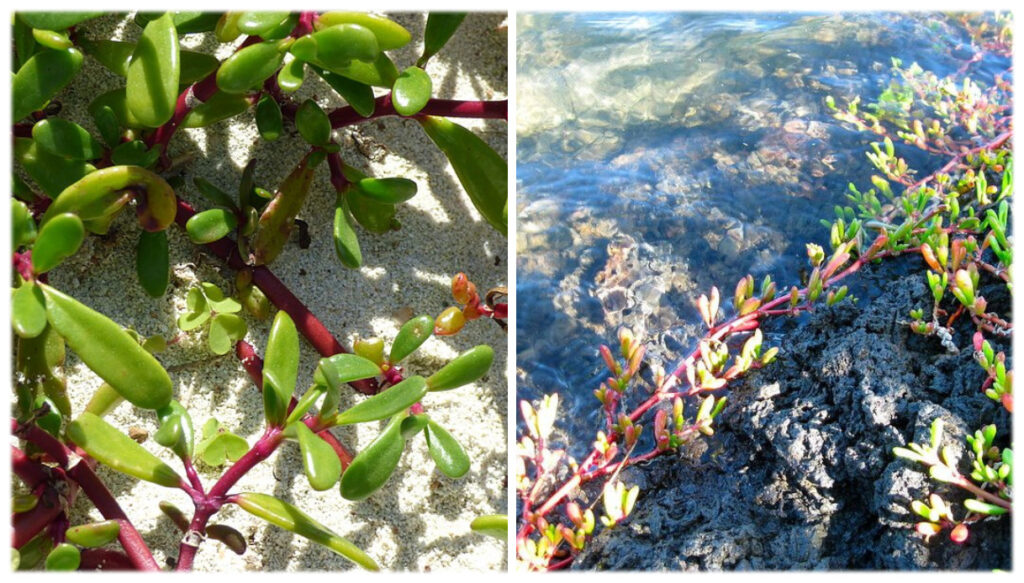 ‘Ākulikuli is also called ‘Ākulikuli kahakai (shoreline sea purslane). This is a ground cover that is highly salt-tolerant. It grows right into the water and helps filter and clear the water of toxins.

The star-shaped, light pink flowers grow along with the plant’s succulent leaves. These leaves are filled with omega-3 fatty acids and other nutrients.

Insightful chefs will add ‘ākulikuli raw to salads for a similar crunch as a cucumber, plus it adds a lemony, peppery flavored zing. Add some to a soup, and you will taste a bit of arugula. I saw one recipe which used it with avocados for an out-of-this-world taco!

‘Ākulikuli is indigenous in Hawai’i though it grows worldwide. 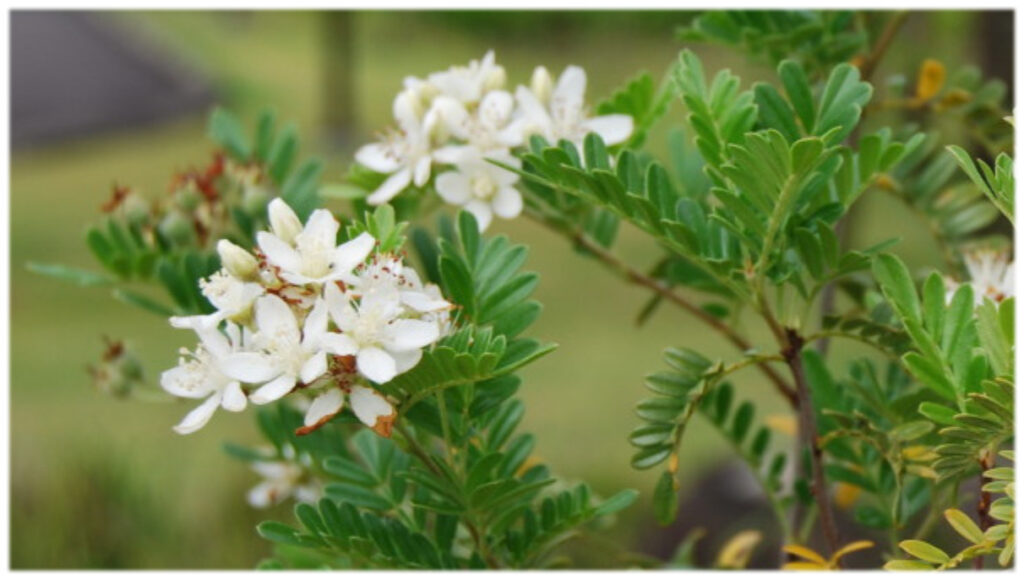 ‘Ūlei is a member of the rose family. A lovely groundcover, its vine-like branches, covered in glistening, dark green leaves, snake along the ground, bedecked in fragrant white blossoms.

Hawaiians made spears, fishnets, ʻūkēkē (musical bows), and even backscratchers out of this durable, flexible wood. The ‘ulei wood is also suitable for various useful tools, including harpoons which are used to spear he’e (octopus).

The plant’s sweet-scented white blossoms turn into edible fruit and are used to make a lavender-colored dye. 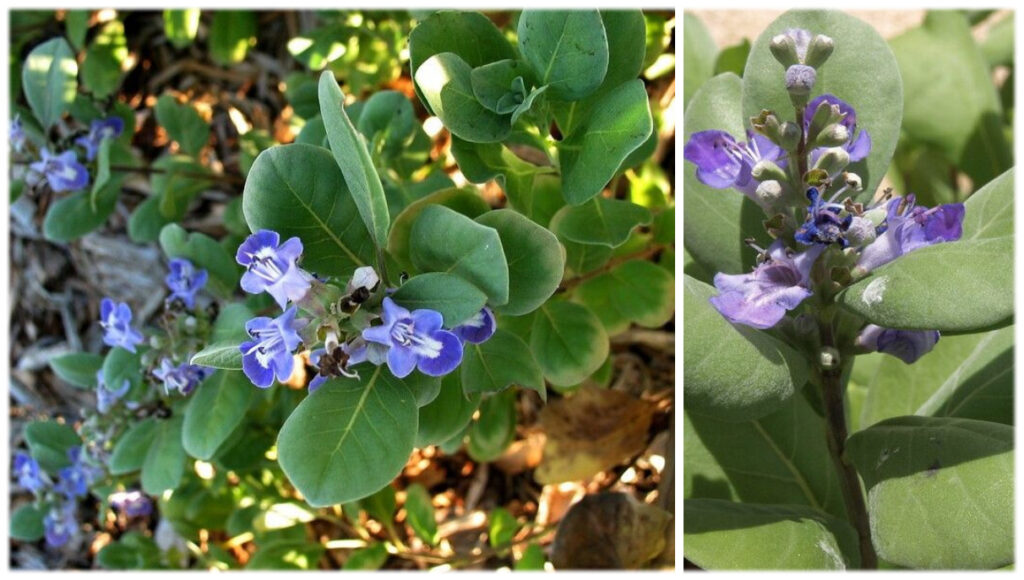 Pōhinahina has hina (silver) leaves that smell like sage when crushed. The fragrant, lavender-colored flower stalks are used in lei-making for their scent and staying power after cutting.

Traditionally, Pōhinahina was used for minor illnesses, but today, besides lei, it is commonly used in erosion control and landscaping. Although its true home is near sandy beaches and low elevations, it is very adaptable. 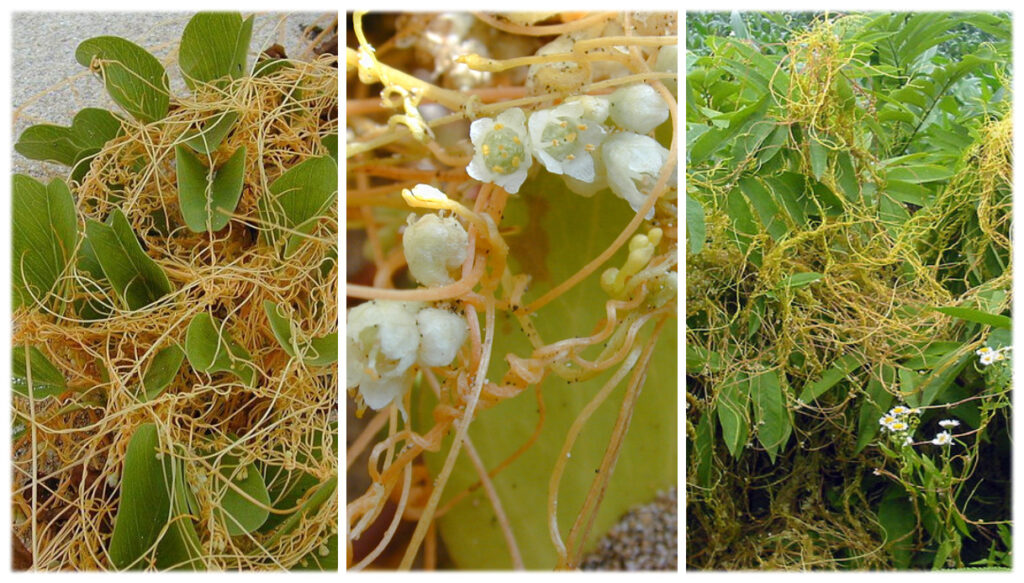 Pōhuehue or beach morning glory is entwined with yellow strands of kauna’oa.

The beach morning glory is a delicate beauty along the rocky shores while its strong, up to 30 feet long vines protect the coastline with thick taproots. 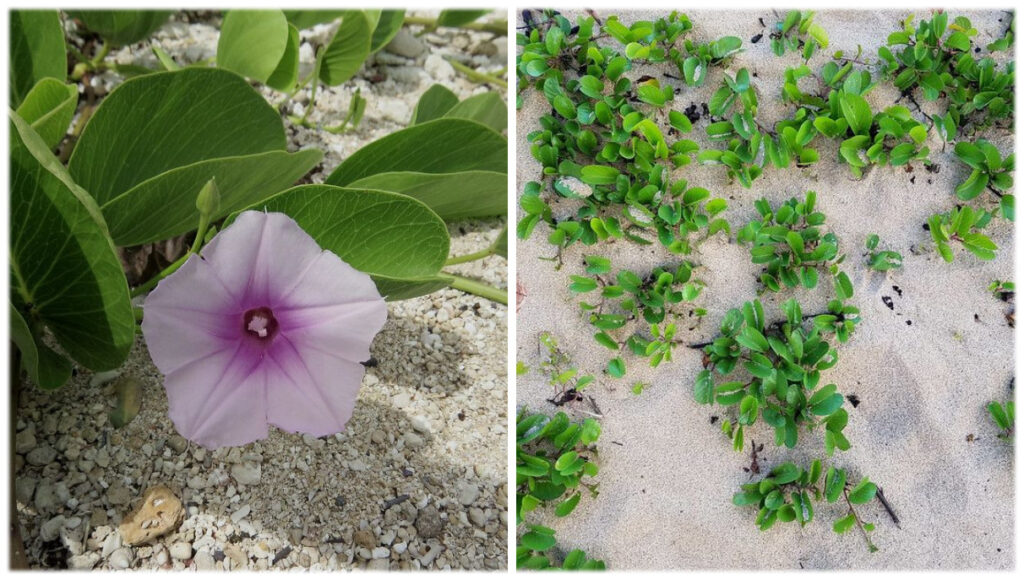 Kauna’oa, on the other hand, is quite beautiful, even though it’s parasitic to other plants. Its tangle of yellow and gold strands interlace with pōhuehue vines showcasing their purple flowers. One tale says they are lovers and cannot bear to be apart. On a positive note, because this is a parasitic plant, you can take cuttings and wrap them around weeds and other undesirable plants.

Kauna’oa is the official lei flower of Lana’i Island and blooms in summer and fall.  Every island has a lei flower and a color.

Click below to find out about the other islands. 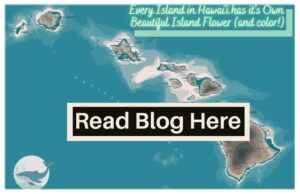 Fun Fact: Surfers chant a mele (song) and slap the pōhuehue vine against the water’s surface in hopes of a rising swell.

Interesting Fact: The Pōhuehue flower is the largest beach flower shown here. The others are all the size of a nickel or smaller. 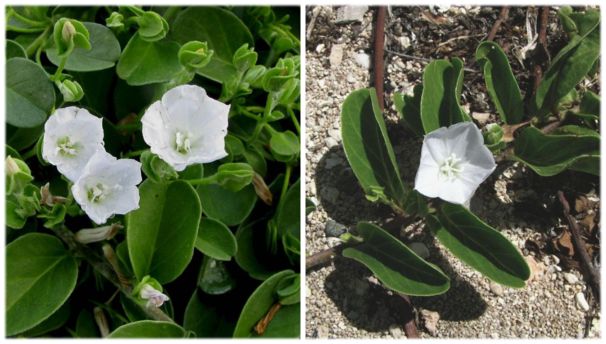 Pā’ūohi’iaka, which means The Skirt of Hi’iaka, is a family member of the beach morning glory plant with many health benefits. Hi’iaka’s older sister is Pele, the Goddess of Fire, and from their story is how the flower got its name.

Early one morning, as the story goes, Pele took her baby sister Hi’iaka with her down to the sea. Pele was going to surf, so she laid her down on the sand while surfing. Naturally, the sun rose high in the sky, and Hi’iaka’s sensitive skin began to burn. A native vine nearby saw the baby’s skin burning and began to grow quickly and cover her. Much later, when Pele returned from surfing, she could not find her sister. Finally, she discovered Hi’iaka hidden under the many leaves of the vine. She realized how irresponsible she had been. She then thanked the vine for protecting her beloved sister. “From this day forward, you will be known by all the Hawaiian people as Pā’ū-o-Hi’iaka, the skirt of Hi’iaka.” 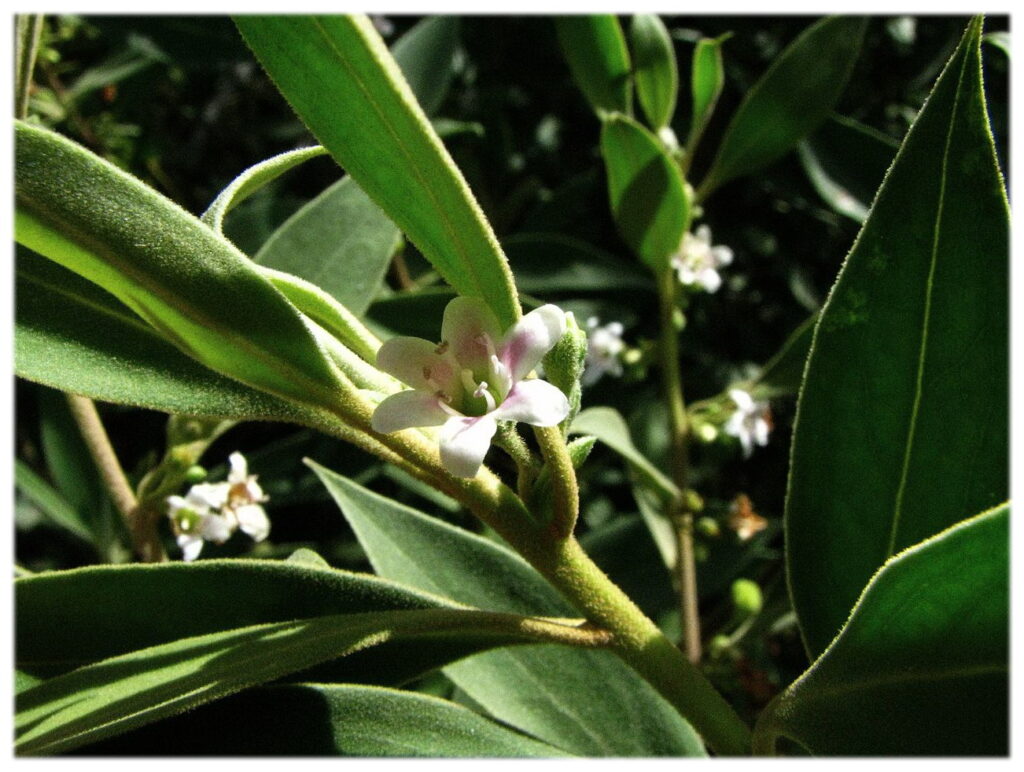 Naio is a beautiful tree with small, delicate leaves, also referred to as false sandalwood. The tiny flowers have a powerful honey-citrus fragrance. The wood is solid and was used in building houses, spears, and other tools.

During the mad dash of the immensely valuable sandalwood trading rush, beginning in the late 1700s, naio was often passed off for authentic sandalwood. Once this was found out, the naio tree got the nickname of false sandalwood in Hawai’i.

Now that you are more familiar with some beautiful flowers you will see growing along the beaches you visit, you will find yourself exploring some of these previously overlooked plants.

However, be careful NOT to eat any of them until you have identified them 100%!

And don’t lay your baby down in the sun, hoping that the pā’ūohi’iaka will weave a skirt to keep her out of the sun!

Like many plant people, your beach walks will now be enriched by the sight of these native plants and flowers. So now, when you walk along a deserted beach, you might just see some of the ruby-colored flowers of the Ko’oloa’ula. Or, maybe some of the buttery colored ‘ilima papa flowers, dancing in the morning sun.

Consider this a good omen!

You are blessed by the Hawaiian plant spirits.